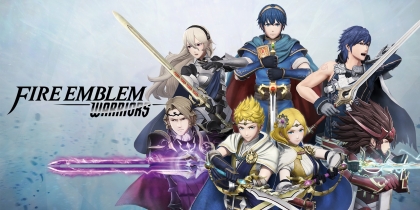 Fun Rating:
5 out of 5
Read more...
First of all, I haven't really played any Fire Emblem games so the universe is pretty much new to me. Meaning, I had no particular feelings regarding any characters prior to this game. So I really just went into it for what it is, a musou game.

It's a great fast paced hack and slash/musou/action game. There are a lot of characters, that you have to unlock, with enough difference in gameplay to make most of them interesting and most likely enough for everyone to enjoy. There are a ton of missions to do once you beat the campaign and a ton of stuff to farm to upgrade your characters. All of this makes up for a super addictive game and this despite a fairly simple gameplay overall.

It can be a serious time sink if you're trying to 100% the game. There's just too much farming to do. I have no recollection of the story honestly so it most likely wasn't anything to write about. The DLCs felt a bit like a cash grab (some additional characters were just reskin, same moveset as older characters already in game) but if you want more it is kind of a must buy (so yeah I bought it...). Managing your inventory turned into a chore later in the game when you're hunting for specific stats.

In the end, I can't say it is a perfect game by any means. Yet I had tons of fun with it, a lot more than I expected. It's a really engaging game that I had a hard time to put down. But after so many hours I kind of feel burned and even a bit bored so time to put the game to rest. I got a lot of other games to play too so it's for the best. But I can easily recommend FE Warriors to anyone who likes musou game! I sure had a blast with it.

Every single time I see this game, I forget it’s not the one for cellphones. xD
I almost got this game a couple weeks ago. I saw someone selling a second-hand copy for around $40, but I passed because I never played any fire emblem games. After reading this, I’m starting to think that I should have bought it. Do you think I should try this game before Three Houses or it doesn’t matter?
stupid question, but what is a musou game?

A Musou game is the Japanese way to say a Warriors game, like Dynasty Warriors. It’s basically a genre of game of its own.
I thought it would be easier to identify the genre this way. I used to call that kind of game beat’em all. But some call them hack and slash or simply action game. But since it’s a Musou game I used that term to define its genre that way.

Anyway, It doesn’t matter if you play this game or not before Three Houses, but it is also totally different. And both games are unrelated that’s for sure. FE Warriors is purely an action game, where you mash buttons to hit thousands of enemies and I believe appeal to fans of the franchise by providing some fan service with all the casts of previous game in one (though it favours the most recent 3DS game). While Three Houses should be a tactical RPG, following the regular franchise? I’m honestly not familiar with the FE franchise but Three House should be the classic FE and FE Warriors is like a spin off (or one could even say a reskin of Dynasty Warriors). But all I know is I love a good beat’em all/hack and slash/musou game whatever you want to call it xD
And regarding the price, 40 USD is a bit much today I think, I paid that price like a year ago but I don’t know if the price evolved like that in your region too. Because here we can get a new copy of the game for about 30€ now (retail price was 60).

Thanks for explanation. I just learned something today! I always called these games hack’n’slash.
I heard there is a cellphone game as well, but I guess, it’s just a spin off as well. I’ve never played any FE games, but I love RPGs and I heard a lot of good things about this series, so I’d like to try their next game.

Nintendo does not operate in my country, so I have to import Switch games or buy from someone who did this, but either way, there is a 70% import tax here. Since they are a considered a luxury item, they never lose value around here. BotW or Mario Odyssey are still sold for ~$50. $40 is the “normal” price for Switch games that aren’t these 2.
Fun fact Pokemon Let’s Go and Smash cost $70-80 respectively. For comparison, MS and Sony games cost around $40 at release. xD

See, everyone call them something different xD there’s probably a clear definition for each genre but too lazy to look it up.

Anyway yeah Nintendo games are expensive here too. But not as bad as you apparently. Though BotW, Odyssey or any Nintendo first party games really are long seller here as well, meaning price never drops no matter how long ago they released. FE Warriors is an exception for some reason, probably because it’s a spin off.

Though as said, FE Warriors is not a RPG at all xD and I never paid any attention to the cellphone game. I still don’t use smartphone and I’m not really interested in games on smartphone so I don’t know anything about it. But because of FE Warriors I’m kind of interested in FE the franchise too now so I’ll probably give that Three Houses game a try at some point. But for now, I’m loaded with games for good while! Hyrule Warriors (an other Musou game haha), Bayonetta 2, Night in the Woods, Diablo III, Gris, Celeste, Missing JJ, Pokemon, Okami and Captain Toad. Plus I have to beat Ganon in BotW still. And finish Splatoon DLC.

FE Warriors, Hyrule Warriors, what is next? Mario Warriors? xD
You have a year-long supply of games! I still need to play Bayonetta 1 on steam, but I hope to get the sequel on Switch as well, especially now that I heard the 3rd game is coming.
I’ve only finished Celeste in your list and it was my GOTY last year. It’s soooooooooooooooo good. I highly recommend it!
Anyway, have fun with all these games!