I noticed Aces of the Luftwaffe was free on the Microsoft Store, so I gave it a chance, but most enemies don’t shoot until after the half-way point of the screen (sometimes as late as 2/3rds across, or even just a unit or two from the edge!), and because they take enough hits for some in the formation to make it that far before dying, you often don’t have much room to avoid their attacks since you can only shoot forward. Worse still, later levels just spam a ton of enemies, some even coming from the top and bottom instead of just the right, to the point the game reaches bullet-hell levels of unfairness. You can buy fire-rate increases with in-game currency, but you also need that same currency to unlock later levels, so I just gave up around level 3 of the second set (and I only made it that far because you can take a bunch of hits before dying) and moved on to my Amazon Prime games instead:

3D Platformer with hack ‘n’ slash elements. Unlike many other games in this subgenre (both 2D & 3D), there are environmental hazards like black-red blobs or shockwave-spawning enemies, but unfortunately, the vast majority of good platform design is relegated to optional “voids,” where you have to do the whole thing in one go without getting hit at all (so the harder ones end up becoming tedious due to how much you have to redo on failure). In the main game, there are way more of the lazy, generic “beeline/shoot towards you” enemies, where level design either has no impact or makes you wait for them to come back after knockback, but at least the game lets you lock-on enemies with LT. Some enemies even have those unfair “dodge at the exact right moment of the foreshadow animation or you get hit anyway” attacks. Speaking of cheap, the game sometimes introduces new enemies and hazards in ways that almost guarantee you’ll get hit: the sewer puts the first pressure-sensitive spike platform right behind an in/out spike fence, and the first floating laser-shooter enemy is next to a wall-run over a pit…and speaking of wall-running, the game kinda sucks at sectioning areas off, so there are some walls that simply can’t be run on (even though they look identical to the ones you can) and some ledges can’t be grabbed; you’ll just keep falling even if you have the ability:

The game is somewhat nonlinear, but there’s no map, and the path forward can be easily missed if you don’t know where to look, namely in the city and ice tower (and even if you do know where to look, you’ll have to pan the camera around each nook and cranny of the area until you spot the next platform).

The game saves very often, but if you close and reopen the game, you start back at the last unlocked-statue you visited. Not only can they be a ways back from when you quit (which, admittedly, can be used to your advantage), but they also cost quite a bit of in-game currency to unlock, resulting in you not having enough when you find the next one. You also don’t get the item to fast-travel between them until after you beat the second dungeon.

Even the platforming itself can be iffy. There are a bunch of times you have to wall-jump up a shaft, but since the game is 3D, it’s easy to accidentally move a bit forward or backwards, causing you to miss the other wall (and not holding left/right means you don’t cling to the wall in the first place). The game also has a stamina meter exclusively for wall-jumping, so there are times you’ll have to jump off onto a nearby platform just so you can jump back to the wall and continue your climb. Something I had to figure out on my own is that if you dash off a platform, you keep your jump, making platforming reliable. Oh, and the game has the Hat In Time issue where some platforms won’t display your drop shadow, making platforming unintuitive: 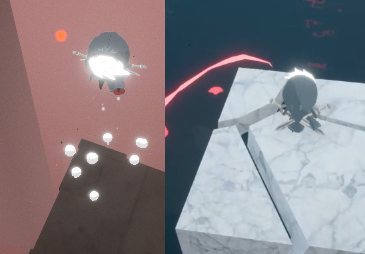 The bosses are used as an excuse for the game to be less fair than normal. The first boss just shoots out shockwaves, but they’re in such rapid succession that you can’t short-hop over the first one without landing on the second, yet you also can’t normal-jump over two at once. The second boss is more fair (slower shockwaves and you have the double-jump at this point), but it’s also underground most of the fight, so there’s a lot of waiting. Not long after this, the game lets you tackle the next three bosses in any order, and while it’s neat that they incorporate level design and stage hazards into their fights, they also have those too-quick-to-react projectile attacks, so even after you memorize the timing via trial-and-error, it’s still easy to get it slightly wrong and get hit anyway. Plus, they’re also shielded a lot of the time, meaning even more waiting. Same goes for the final boss, except the attacks are much more frequent and you have to jump over shockwaves, so if you time the dash wrong, it’s easy to get hit-stunned in midair since you won’t get another dash until you land. The final boss’s 3rd and 4th phases are even worse because it can teleport around the arena, but your lock-on doesn’t persist past teleportation and you often can’t reach the boss in time to attack before it teleports again, so it’s both a foreshadow animation you can’t see and a projectile you can’t react to.

The ending also sucks because there isn’t one; the boss dies and the game cuts to credits. Maybe there’s postgame and an actual ending with it, but this game isn’t worth it.

Not recommended. It has good ideas, but is ruined by the hack ‘n’ slash influence, as usual.