While doing my PA stuff, I think Im going to break up my posts, but I’ll go back to my weekly posts later on. I played Doom 3 on Thursday and Saturday. …I may have forgotten to update both days, but I’ll try to get caught up today when I play.

Basically all that’s necessary though: the game added spiders as an enemy. This game has suddenly become 10x more terrifying.

[Technically] 01/15/19
It’s midnight right now. I unexpectedly got really exhausted and am definitely not playing Doom this late at night, so I’ll have to do my update in the morning.

So far, I believe my weapons are a pistol, shotgun, and a machine gun. My preferred weapon is actually the shotugn, which is different to other games [I typically use a machine gun due to my lack of ability to aim properly]. I think its because I’ve realized when I get spooked by an enemy, I shoot and accidentally end up killing the enemy a lot. 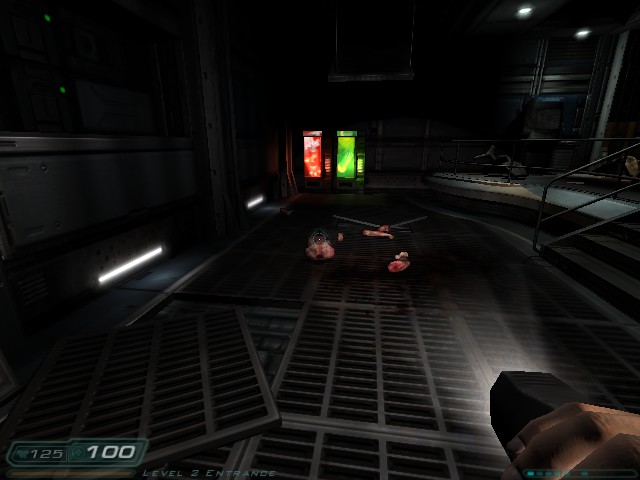 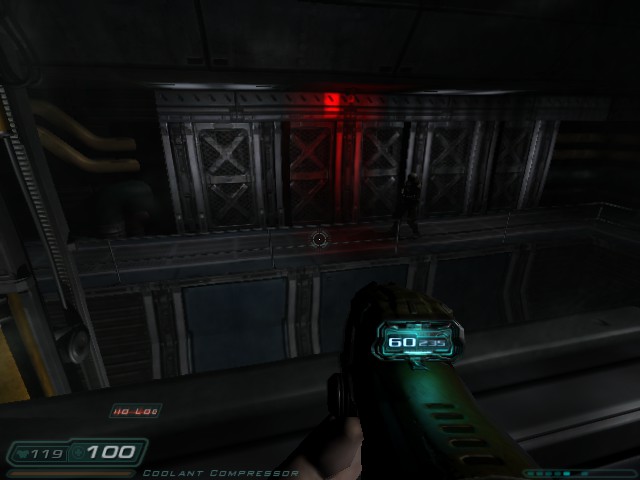 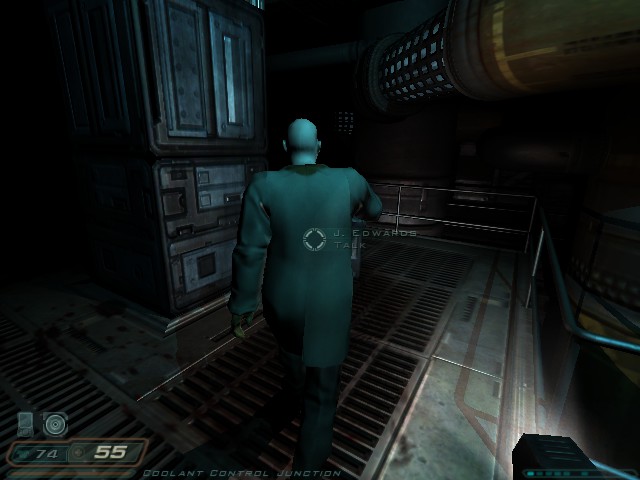 New friend! :) This guy was leading me around dark areas. I really doubt he can die, but I defended him with my life anyway because I didn’t want to walk around alone. Thaat’s why my health is so low in this picture.

I feel really bad, although I knew this would happen. He said he’d guide me around as long as I helped him get out of the compound or whatever. And of course, he died before that could happen. :( 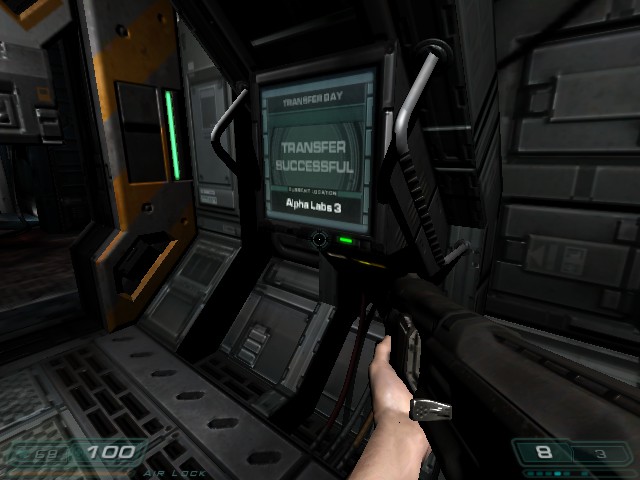 Getting through the Alpha Labs has taken five years, and I didn’t even get to meet up with the Bravo team. 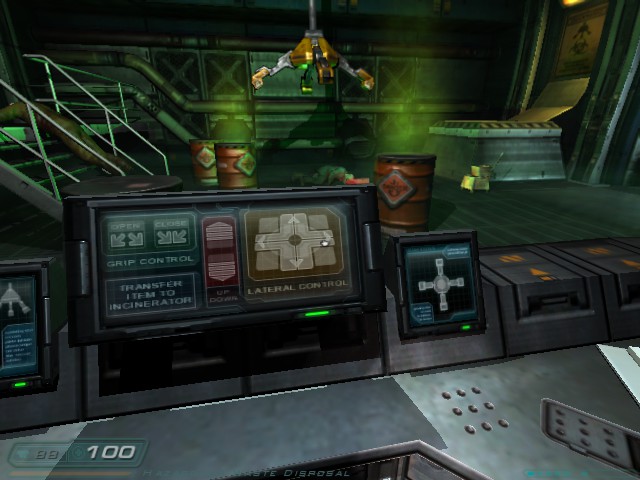 The last thing I thought I would do in this game is play a more intense -and deadly- version of the crane game. It was a nice relaxing moment away from being spooked by things constantly though. 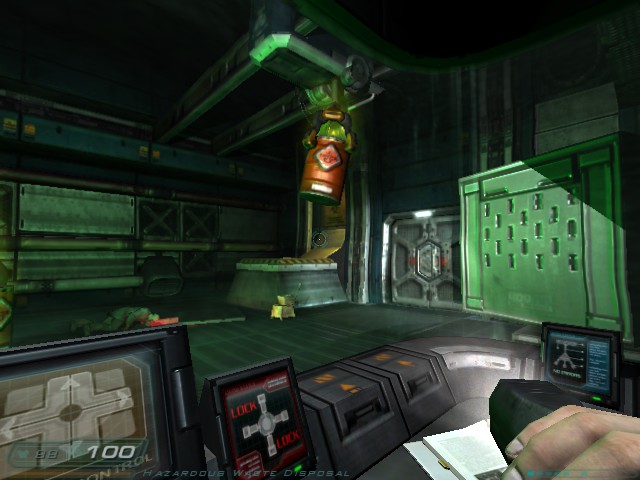 Plus I got to incinerate things. 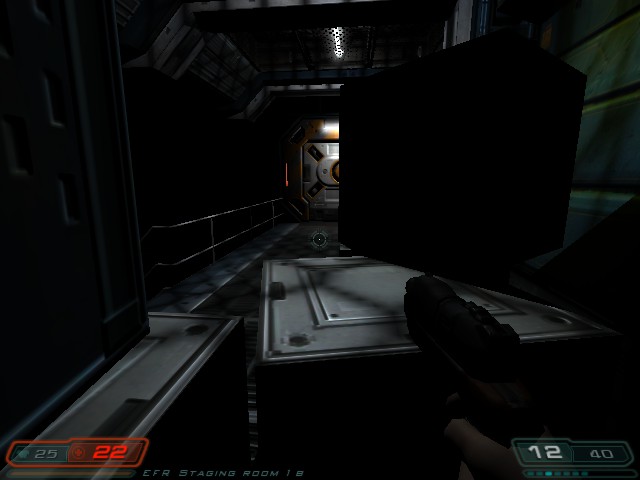 The pistol is rough in the later stages of the game, especially since the armored machine gun enemies. Speaking of, Doom has some intense…zombies?? They seem like zombies, but they can operate guns, move decently fast, etc. 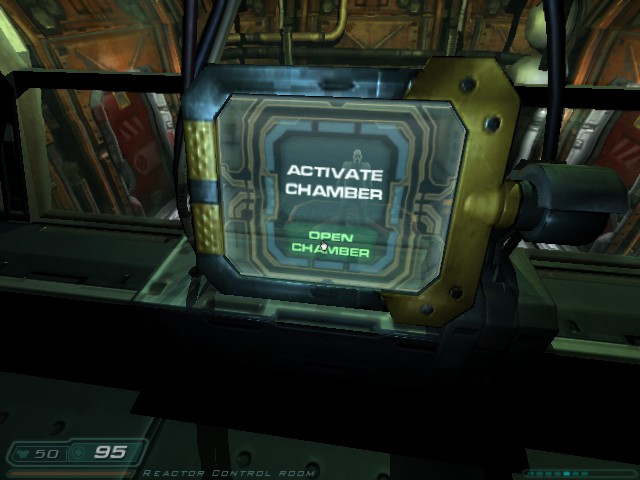 So far, this has been my worst moment in the game honestly. It didn’t click in my head that “activate” and “open” are different buttons, so when the guy in the chamber asks you to get him out, I thought it was a trap to kill him. After re-loading about three times and trying to look up the code for the locked door in the next area -this honestly took probably like twenty minutes-, I finally found a guide that said you have to uh…click the open chamber button. This is why I don’t play puzzle games.

Then again, maybe this means I should play more puzzle games because this isn’t even a puzzle. 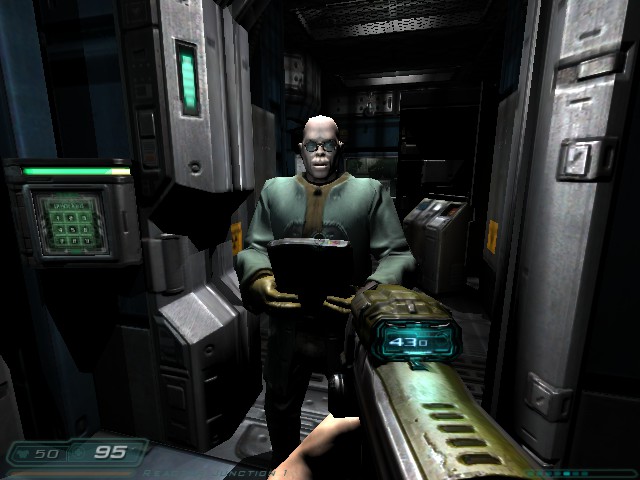 But hey, he’s alive! Annnddd he doesn’t follow me for the rest of the game either. 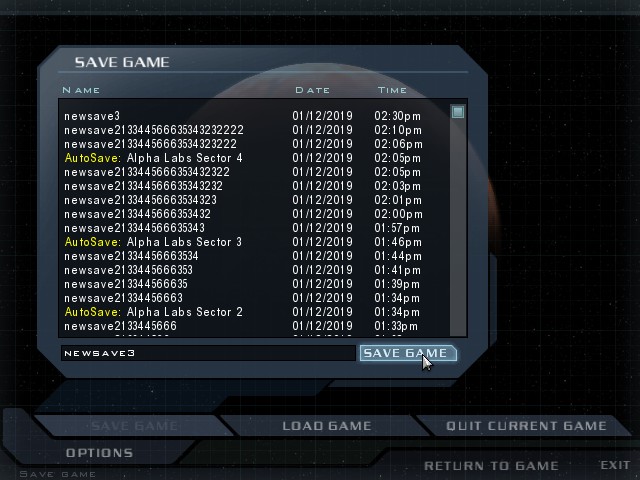 My save names are absolutely awful. I’m so sucked into the game when I play that I just quickly type a number and click save. I’ve only created a new save [newsave2, newsave3] when I ran out of space in the name line. 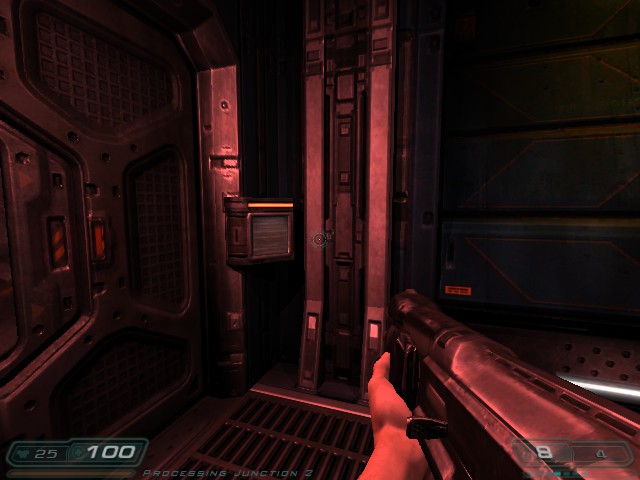 Reminder why I should do my updates right away. Why on earth did I take this picture 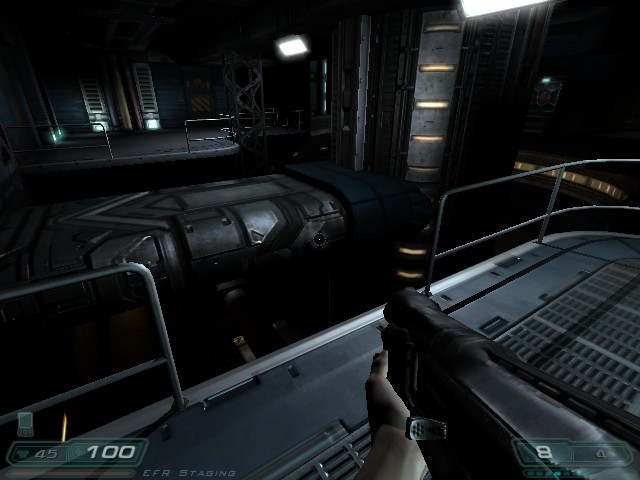 THIS PART WAS ALSO SO AWFUL. I was like “Oh no, do I have to jump?”
I jumped annnd plummeted to my death. “Oh, guess not.”
I then noticed a ladder. “Whoops. So that’s where I go.”

I looked around for maybe 10-15 minutes in the lower area, finding supplies and enemies, but no way up on the other side.

I then try to jump again, once again plummeting on my death. At this point, I decide it’s not worth doing the lower area again.

Turns out you have to hold shift AND run. Otherwise, your character does a pathetic little hop that’s essentially just stepping off the platform.

Even after figuring out how to jump, I died one or two more times trying to get through this area. Sadly, this was not the end of the “platforming” in this game. In fact, it was just the beginning.

Here’s a series of clips documenting this journey. 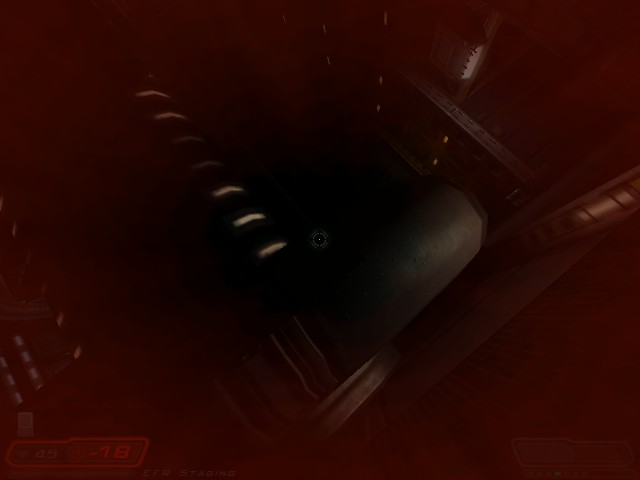 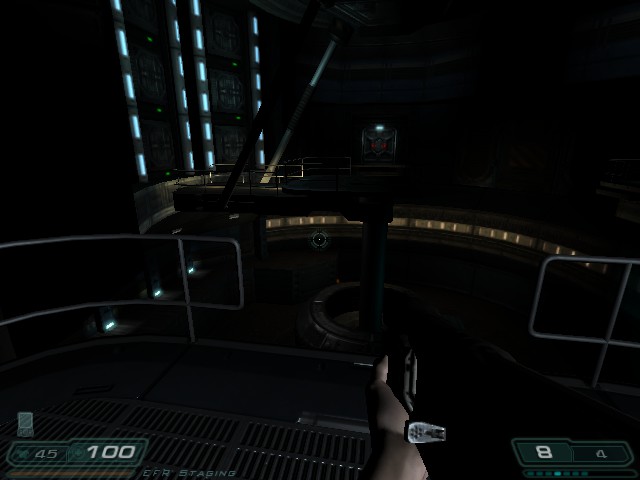 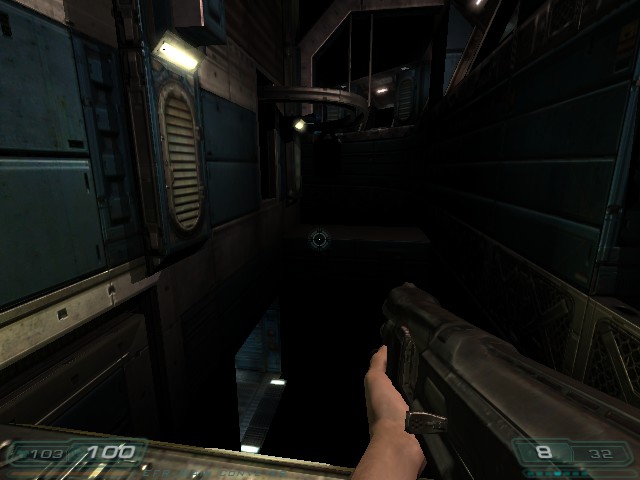 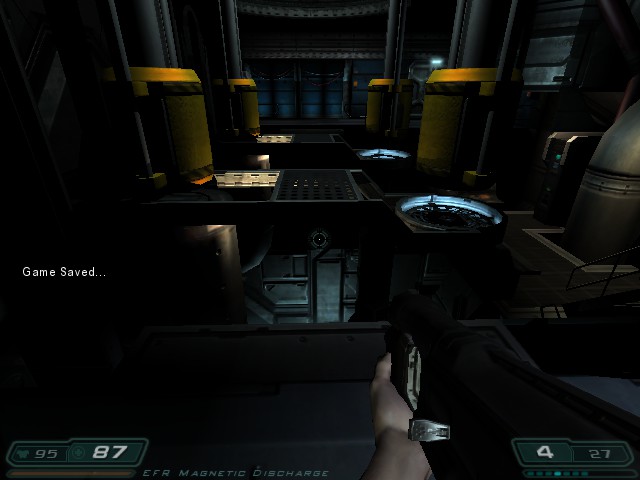 This boss(?)/enemy was a major pain. It’s a bit hard to tell what’s a boss in this game though; I think this was the first real one. Another robot friend! :) I’m curious if my lil buddies can die or not. 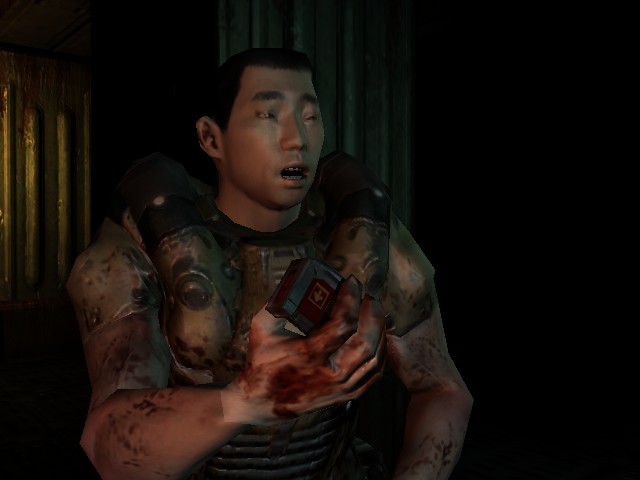 Sadly, these are now approximates, but they shouldn’t be too far off.

Times dying: 6 [Two times from the possible boss enemy and pretty much the rest from fall damage]
Times almost dying: 6-8