Hi there! I’m new, so I figured I’d do a bit of a roundup of games I played in the past month or so. (I don’t normally beat this many games in a month, so future posts will probably be a lot shorter.)

I don't know what initially made me pass on MidBoss, but I wish I'd gotten to it sooner. I love how customizable it is: you can do the traditional roguelike permadeath thing, you can do 1UP mode with extra lives (and the potential to find more, but they're rare), or Narrative mode, which gives you infinite lives and buffs. (I play on 1UP mode.) If that isn't enough customization, you can also make a custom game that's as easy or as hard as you want (such as only having one life, but you're buffed to all hell and get rare item drops all the time). So far, I've managed to get to floor 10, so I think beating this in the near future isn't out of the question.

Another unique feature are the death cards. You can import a death card to either start a new game with an item from its inventory or to play the seed used by that playthrough. They can be shared between users, too. 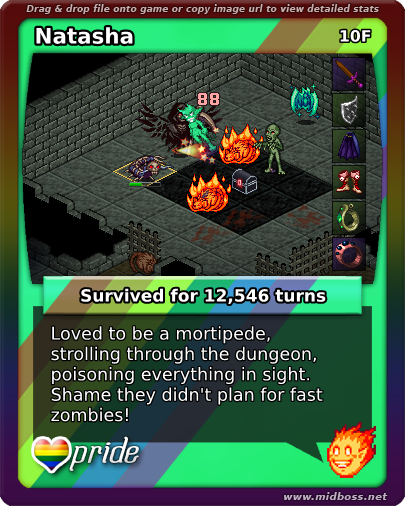 (This was a really stupid death…I knew I wouldn't survive the arena's trial, but I activated the trap anyway…)

I'm not really into racing games, but something about Slipstream made me really want to try it instead of just giving the key away. (I think it was the soundtrack.) I'm glad I did; this is really fun. I've been having some difficulty getting the hidden achievements, though…I think it'd help a lot if there were a proper minimap.

Fun fact: Slipstream is one of two games I know of (the other being Hand of Fate) which has button prompts for my specific brand of generic controller (Matricom G-Pad). Usually I get Xbox prompts when I use it (which is fine, because the G-Pad is basically an Xbox 360 controller with the serial numbers filed off, complete with the same colors on the face buttons).

I'm not sure if Windward is really the type of game which can be "beaten", but I set it to unfinished just in case…it's clearly meant to be played in multiplayer, but it's fun enough in singleplayer too.

the earth is a better person than me

This was…something. Never thought I'd play a game where the protagonist has bondage sex with a tree, but I guess there's a first time for everything.

I didn't realize until after I played this that it's actually the third game in a series. Oh well. It was fun enough.

So cute!! Some people might be turned away by the fact that the protagonist is clearly way too smart for a nine-year-old, but I felt that it added to the humor of the situation--she's the only reasonable person in the entire story despite still being in elementary school. I never got tired of the running joke of everyone except Rie seeing Licia's obvious demon traits (up to and including saying that she's a demon from Hell) and thinking "wow, she must be from Norway!" Plus, the art is gorgeous (both the character art and the food art).

I noped out of this one when I realized that the 10-year-old girl you meet is a romantic option for the adult male protagonist. Didn't get far enough in the game to see the lesbian rape mentioned in the reviews, either.

I played this after dropping Osozaki because I figured that it would be totally inoffensive in every way. I was basically right.

There were some interesting ideas here, but the execution is extremely lacking. Still by far the best game the developer has ever released. One of the achievements is broken, though (the one you're supposed to get for…starting the game…).

This is unfinished, and it shows. It's really obvious that the game was made to be played as a male protagonist with the female protagonist as an afterthought--a reference to "another man in the house", pronouns replaced with "None", etc. Eventually I got so tired of it that I went for what I knew would be an early bad ending just to say that I "finished" it.

It's not every day that you see an explicitly pro-communism game on Steam. I can only wish that enacting widespread change was as easy as it is in this game…

I don’t really have much to say about these visual novels other than that they’re not very good:

Birdland - tfw your summer camp gets taken over by the bird aliens from your dreams and you and your crush have to save humanity from being conquered by birds 8.5/10

Creatures Such as We - I played this years ago, but I got the urge to replay it recently. It’s just as compelling as it was in 2014. It combines a sci-fi romance plot with meta commentary about video games and the industry (I’m still convinced that the fictional developer whose game the MC has been playing is specifically a reference to BioWare, but the commentary can apply to other developers, too). 9.5/10

Eat Me - I love interactive fiction, but I have to admit that I’m not as experienced with parser IF as I’d like. I picked this one in part because, unlike most parser IF, it can’t ever be made unwinnable–but I ended up consulting a walkthrough for a couple bits anyway. This was…an experience. The gimmick is that you’re playing as a child with an insatiable appetite in a castle made almost entirely of food. Besides moving around and examining things, virtually the only command you need is “eat” (“eat shackles”, “eat cage”, “eat guard”…). The writing is lush and descriptive and made me hungry and nauseous in equal measure. 9/10

Lonely Wolf Treat series - I binged all six games in one sitting (they’re not very long) and now I can’t wait for the next game to come out! The art is so cute, but they can be utterly heartbreaking at times, too. I just want Treat, Mochi, and Moxie to live happily ever after together, okay? (By the way, even though these are made in RPG Maker, they’re more like 2D walking simulators.) 8/10