Been a while. Thought I would do quick write-ups periodically (bi-weekly? Weekly? Not sure) to keep track of what I am doing.

Overall, less time to play games overall but chipping away at the old backlog. I am also trying to update the games pie chart, but taking quite a long time. I figure I will chip at it every time I write one of these.
This week I focused mostly on games that had lower percentage points (sub-50), though I did play something new (Devolverland) and something mostly for fun (Sims 4).
Below is my actual progress taken from https://completionist.me My goal is to keep moving everything to the right. 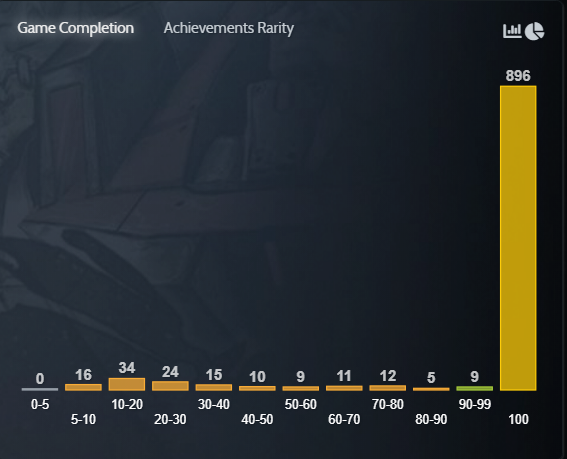 So I took a little break on updating this to tackle the backlog. Currently, I am trying to 100% my won games. Two games are unplayable, one I just really suck at. Otherwise, I am up from 16 games completed to 28! Unfortunately, I have a number of games that will take quite some time (Ryse, Tropico 5, Cooked, etc)

Games that I 100%-ed this time around.
Most of these were very short or already started.

Made good progress, as of today I have 38 wins and a bunch of them are now completed. I have a day off soon, but school starts on the 15th. I am aiming to finish Ryse and or Tropico by then. I am going to go back to a weekly posting, probably on Friday or Saturday nights.

Changed up the format for this week, since I didn’t feel like typing much.

This week, I did play some games for a little bit, but actually focused on reaching 100% on a few games that I had a good amount of achievements on. At the moment, I have only 16 games completed on Steam.

Games the I 100%-ed this week. (And one I am very close to)
Most of these only had a few achievements left, so that’s why there quite a few!

GIFTS/RECEIVED FOR FREE
Too many to list. FFX/X-2, Crypt of Necrodancer, the whole Millennium Series, Tropico 4, Factorio, Slime Rancher and more!

More Thoughts
I am trying to finish up games before grad school starts up, since I have a little extra time now. After I finish Epic, I want to play Rollers of the Realm, a game I won.

If you have time, and want check out my games, let me know if there is something else I should bump up in priority. Some games look like I have very little time in them, but its usually because I played them on console first. (Skyrim and Fallout 4 are the most notable I think)

Also have a puzzle going, that might be done soon!

Lazy Guys – I really like this bundle site, though the bundles are infrequent.

Humble Indie Bundle – I like HB, and the Beginners Guide was on my wish list. I accidentally spent 25 dollars on it though, thanks to ordering on my phone.

Thanks to Mandrill, this will be my format until I am tired of it.

I am still playing random games for a few hours to sort them and battle the “Never Played” part of the chart. Anywhere from 2 – 4 hours seems to do the trick.

More Thoughts
Since I don’t want to make my post too long, I only highlight a few games I played during the last week. As usual, some will continue to be played, but others might go to the “Will Not Play” pile.

How do I choose my games? I prefer to prioritize gifts and GAs, but sometimes it is whatever strikes my fancy. Usually however, I pick 20 – 25 games, and put them in a randomizer to pick 7 or so. This week, it wanted me to play The Magical Silence, but I heard about the ending and vetoed it for the police. Not really in the mood for that.

August Monthly – I didn’t think it was that bad, though RAM was not expected or wanted.

Dharker Bundle o.O – AKA the “research” bundle, maybe a train will be incoming soon.

I think this will be my format, at least for now.

And like last time,Still playing random games for a few hours to sort them and battle the “Never Played” part of the chart.

So i won most of those game on one day, effectively almost doubling my win count. I don’t even understand how, some crazy good luck.

I also played a lot more games;
Popixel, Goblin Defenders, State of Anarchy, Puzzle Galaxies, AOF - World, Flix the Flea, Goocubelets 2, and Club Manager 2015. For the most part I didn’t like these games, some even went on my will never play list. Some warrant a second return.

I’ll try to feature ones i like first. Or ones I didn’t like but have positive reviews. This week, fortunately, there was a lot to like.

Sorry for the super long post. Still trying to figure out a nice way to format this.

Still playing random games for a few hours to sort them and battle the “Never Played” part of the chart.

Gifts
A few friends congratulated me on my new level, and one of my whitelists felt bad after winning over 10 GA’s for me. He is really lucky. They are all very kind.

Bundles
There were a lot. I won’t go over those.

Currently working on sorting all my games in the side categories. Some are very hard to choose!

This week I finished two games, but played plenty more (aiming to wittle down my “Have Not Played” by playing each one for a little bit, a half hour to about 2 hours. This will help me choose what I want to continue first, and what may be put in my “Will Not Play”. Let’s not talk about how many games I have accumulated these past few months though.

For those two games I beat though, they were both very short, and I beat them 100%.

In the case of Aozora, beating it 100% takes less then a minute. The only achievement at the moment is starting the game. But I did unlock all the gallery files by playing through a few times offline. There is an uncensored patch, but I did not install it.

Suits, I won in a GA. Truly, I entered the GA to bump it up to 5 entries (ended with 4 though). But I loved it! I wrote a really quick and bad review on steam;

“Can’t say much else that other people haven’t already brought up.

The humor and relevancy to today.
The “cameos”, such as Chef Ramsey.
Hidden secrets throughout.

I wish there was a bit more customization, and that it was a little longer.00
The teammates were nice, but I wish they were fleshed out a bit more.

Lastly, the “To be Continued” makes me happy and hopeful.”

I don’t think I will hit my goals to finish Brothers or Oceanhorn this month (though I did play Brothers on console with a friend). But I’ll consider it a win to keep chipping away at my backlog. I am toying with an idea to do a GA with a poll or something for people to pick what game I should play through next. If you have any time and suggestions, let me know! I do play offline though sometimes, so my hours and achievements can be a little weird/off.

Been playing different games for a little bit each night, to wittle down the never played list. Some of these will be moved to “will not play”.

Completely sorted my games, and we are at 68% untouched! Bought some bundles darnit!

This was a decent week for games, though my backlog increased with the sale and Humble. I even won 2 GA’s in one day, one the ext, and another the following. But only these 3 I played this week.

I am working at planned games, but making progress otherwise too. At least I gave myself a goal date of August 1st. Higurashi was good, at least chapter 4 has a short wait.

All of these games are visual novels and 2 have some fanservice in them.

I played Sword of Asumi, which I won in a GA. It wasn’t bad, but not very good either. I was kind-of expecting this though. I played through once for real, and then used a guide to get the specific endings/achievements. Surpringsly, I got many of the optional achievements in my first run. I just cannot get one achievement to trigger, despite following three different guides/hints. So I put it in beaten for now, and can try again later. In all, I’d say I spent about 7 hours playing through it, including my extra runs which heavily used skip. I feel bad about this

Next, Go! Go! Nippon! also had a similar issue, but there are no achievements. I also won this game
in a GA. Another game that’s not bad, but not great either. I am still glad I got to experience it though. I can see how it would be useful to people who are interested in Japan and it’s culture, but are new to it. I might even suggest it to the students that I tutor in Japanese/Japanese culture/history.

Lastly, I recieved Cyber City 2157, which has very positive reviews, but I’m not sure how I feel about it. On one hand, I found the stories intruiging, but I also felt there was much to be desired in the language. I noticed several reviewers also noting that the translations seemed off. I eventually had to turn my sound off/way down though. Some of the noises were too jarring. No achievements here either, but I hope they work on the translation first. My playthrough was about 2 hours.

The other big game I played this week was Zero Time Dilemma, the third game in one of my favorite series. I only had one real gripe with it, and it is the fact that the lip syncing doesn’t work, even for Japanese. But I really don’t care about that. Maybe because I play a lot of games like this, I figured out the twists pretty early on. I got lucky with one puzzle by solving an entire room entirely by accident, trying something I shouldn’t have even touched yet. Yay. Overall, a superb game that I had a lot of fun with. I hope the other two make it to steam soon though, as it really flushes out the story. It took me about 17 hours, which is well under the average that I can see. Yikes.

Lastly, I played Kivi, Toliet and Shotgun Which as many reviews point out, is incredibly buggy. Thank goodness there are no achievements in steam (there are in the game itself) or I would probably go a little mad. Otherwise, not really my type of game, and I was not expecting it to be. I did like that I could upgrade my car though. And while not techinically beaten, I played about 6 hours and suffered through bugs enough to say i was satidifed where I got.