Been gaming since I was a kid. Fan of triple A’s and indie titles. Slowly working on my backlog. If I won a game from you from SG, thanks again.

moon on Steam ellie02 on SteamGifts

Hey everyone O_O My last post was back in 2019.. kinda crazy to me. But I thought about this site quite often. I want to get back to posting on here more this year. My first post for 2021 is just a summary of games I’ve completed along with my favorites from last year.

I think these are the only ones from Steam that I finished last year. Don’t think I started any new game (all of these I already started in 2019)…

My favorite and most played games in 2020 were Stardew Valley and Slime Rancher. Something about video game farming really got to me I guess. 😭 This is the progress and how my current farm in Slime Racher looks like: video

My Steam Progress as of today:

Thanks for reading. I hope all of us have a good year and gets that backlog rolling… 👾

Hey folks, I hope your month is good so far. Personally, life’s been pretty hectic (a family death took us by surprise), but we’re trying to keep our heads up.

April, so far, consisted of Point & Click games. With a side of Hotline Miami.

Started & beaten the main game during March. Replayed & finally got everything this week.

Started & beaten the main game back in January, but only got around to completing it this week. I’m looking forward to Season 2!

BEATEN (FOR NOW) + SPOILERS:
NIGHTMARES FROM THE DEEP: THE CURSED HEART

SG win! Luckily, I had free time to start & was able to beat the main story within a day. I enjoyed most of the puzzles and was surprised that there was a good variety of them. You can complete hidden object scenes, rearrange a tile wall piece, and more… At one point, you’re like some sort of scientist that makes an acidic liquid. Later you put together a voodoo doll, even gather a recipe for a potion that turns a dead snake alive. That same snake then eats a rat. Ha.

The story is not what I expected as at first, but later on after reading journal logs, finding other pieces of the story & seeing the in-game events unfold (mostly told/shown by The Guardian through flashbacks after giving him coins ‘doubloons’), I realized that the story is a bit deeper that it seemed. Not amazing, but it was entertaining. Since you do a lot of backtracking, it was nice to have some pretty environments to look at & explore. +1 also for voice acting. After playing Dropsy & Darkside Detective (both games with no voice acting & lots of text), I really appreciated that. Sometimes, it’s just sweet to listen to sit back & let someone else do the talking, you know? :P

I was frustrated & confused at some parts (mostly during my second playthrough without using hints) and followed guides. Though, the most surprising and let-down part of this game was the quality of cutscenes. Everything else was in HD, but the cutscenes are literally blurry/low quality. No way to change or bump it. Oh and shout-out to this game though because until playing it, I had never heard of Mahjong, so that’s cool. :)

Now, I’m trying to get two more achievements, but one of them is a bit of a challenge, so 100% will take a while.

Where do I even start? To anyone else whose also played this, you feel me when I say it can be really frustrating at times, yeah? It sounds like I dislike the game, but I don’t. It’s just one of those titles that kicks your butt and sometimes almost feels impossible to play/progress with, but then when you do… you can’t help but feel like a badass, really. And you keep going without even thinking. I categorized it with my list of “Made me shed blood, sweat, & tears”. It was hard but I’m proud to have beaten it and have it in my library. There were moments of “uggh ahhh” (mostly at the violence/gore) and laughter because things can be chaotic and even a blast at times.

Overall, now I can see why many people have hours & hours logged on to this. It’s definitely a game that you can be really great at if you play/practice enough. Some speed run videos finish a level like it’s nothing. It’s nuts. The pixel art, gore, & music are are pretty cool too. I found myself bobbing my head to some of the tracks as I kill some bad dudes or while I’m being killed by said bad dudes. Here’s a taste of what the OST is on Youtube.

I think I’ll dedicate a longer post or ‘review’ for Hotline Miami later. Hopefully now that it’s done, I can boot this from time to time & simply try to have fun it. There’s still a lot of achievements that I don’t know when or if I can ever get lol, but hey, at least it’s done for now! Plus, there’s post-game content with an extra, playable character ‘Biker’ with his own new levels. And did you know this guy throws butcher knives? Yep.

I won my first SG GA(not sure if the gifter is a fellow BLAEO Assassin, but thank you again if you see this) this week and also did my first giveaway, though I’ll be honest and say, I felt sad that the winner did not leave a comment on the GA post, etc. after receiving it. No one’s obligated to say thanks, I understand, but yeah.

Thank you for your time & for reading this post. Good luck with your own backlogs as always. Let me know your personal thoughts/experiences with any of these games.

Have a good one,

March was pretty much a month full of trying and completing puzzle related and just challenging games. I was weirdly attracted to genres that tested my patience and capabilities.

THE ONES I FINISHED THIS MONTH
From recent to oldest
Hours of some games may not be accurate, I’ll try to record how long the first play through took to finish main story, etc. next time

THOUGHTS ON EACH FINISHED GAME (Mild spoilers ahead) 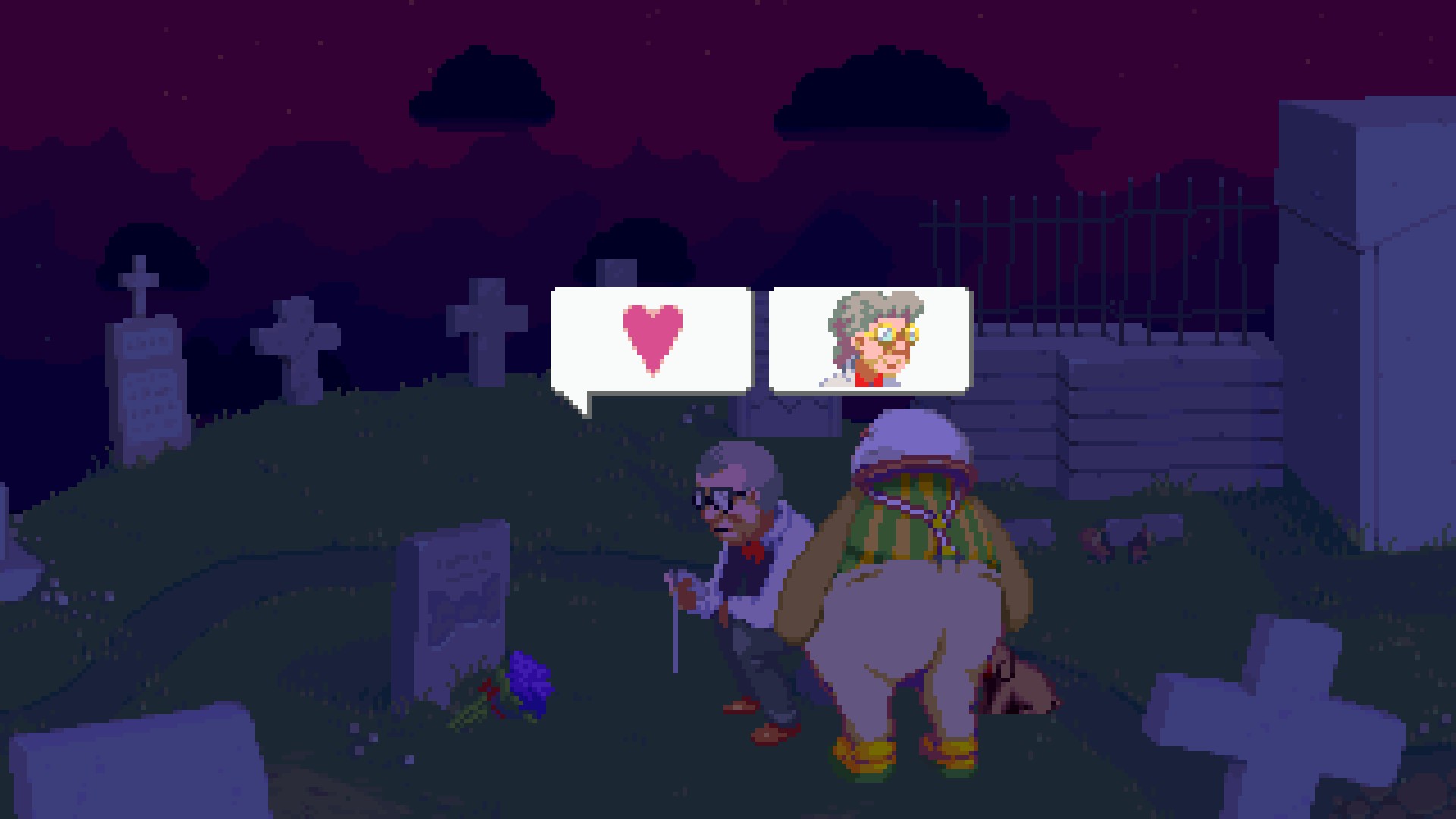 Good Stuff: I adore this game’s weirdness. The combination of the main protagonist’s appearance and what they actually do is not something you’d expect, and that’s good. There are many characters you’ll meet and interact with, like A LOT, and they are usually interesting. Certain characters and what we had to do with or for them pulled on my heartstrings. OH and by the way, you have a puppy alongside with you throughout the game. That’s all I’ll spill for now.

It felt really good helping as many people, objects, and animals as I could. Plus, it made smile to see Dropsy and someone hug after not being on good terms for the first time. :’) The game has many memorable and screenshot-worthy scenes too.

Good Stuff: I was very interested in playing this in the beginning. Though halfway through (mostly at the later chapters) I was rushing and watching some walkthroughs or occasionally used the hint mode to get to the end. So in all up until those parts, I solved the levels and puzzles on my own.

Overall though, this is a good linear game with a pretty 3D polygon art style and colorful environments. Most of the area and puzzle designs are easy and fairly designed. When accomplish whatever it is on your own, you will feel nice. There are collectibles to find and unexpected enemies to kill. Lara is also awesome especially when she’s kicking butt, climbing… just being an overall badass really. Play it and you’ll those cool moments. 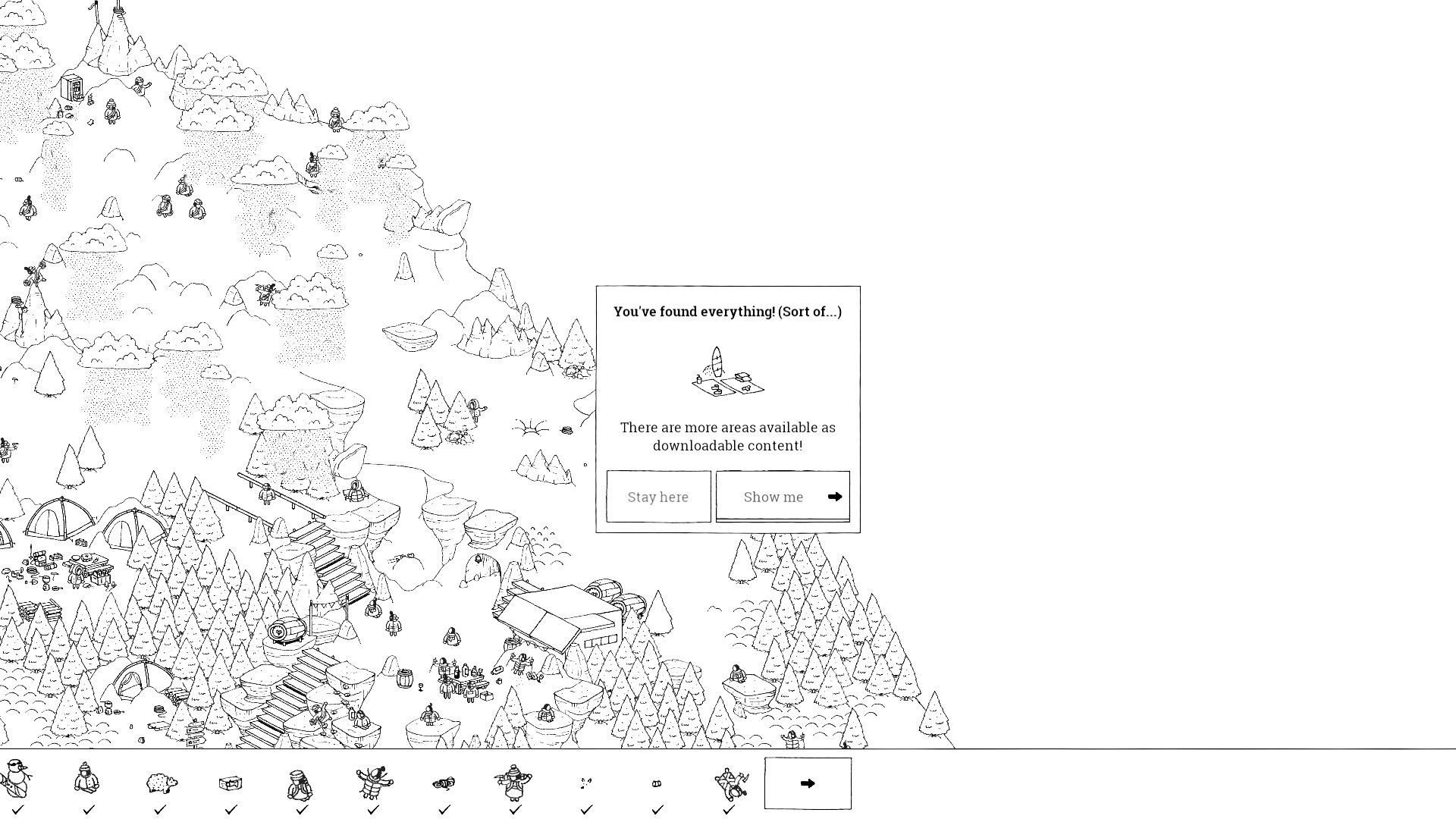 Good Stuff: Cute art style. It may seem “minimal” because of the limited black & white choice of colors. But even with that, this hidden object game is packed with an overwhelming amount of content in terms of the what you see on screen. I ended up watching some videos to progress, but I did try my best to find things on my own. I plan on replaying some levels and challenging myself to not use any help that time around.

Luckily though if you aren’t interested in finding EVERYTHING for the achievements or even just for your own pleasure, then you’re in luck because you aren’t forced to find all the objects in each area to progress to the next one. Another unique thing is the hint aspect.. if you have trouble looking for something, each object has information that can lead you to where they might be. It makes you use your thinking skills and how to connect them so that you can find hopefully find it. Overall, it’s silly and cute, funny at times, and is worth a try. 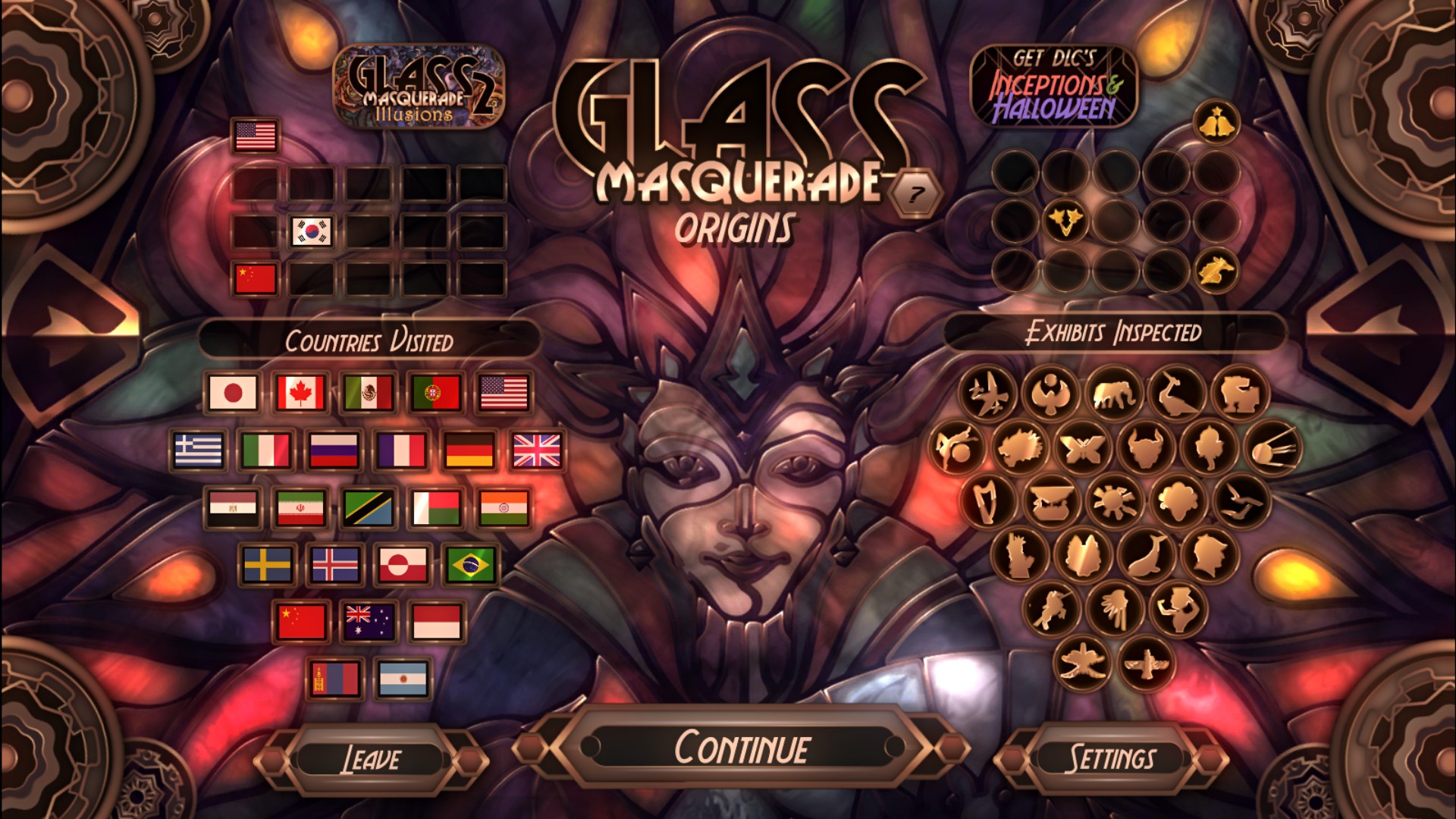 Good Stuff: I’d describe this as an elegant puzzle game. I admit, I didn’t get to appreciate the detailed artwork whenever I played it because uhhh, I was busy trying to put pieces together! :P It’s a simple, yet still complex puzzle game. Some pieces can take less than 3 or 5 minutes, but some can take up to 30-40 minutes (based my own experience). Nothing was too frustrating though. One of the best feelings is when you’re near the end and the pieces become easier and more obvious to put together.

Overall, it has gorgeous visuals and nice music that fits whatever country or continent you are doing. I enjoyed this one and plan on replaying it from time to time as well as finishing up the other DLC content.

Dr. Langeskov, The Tiger, and The Terribly Cursed Emerald: A Whirlwind Heist

Good Stuff: It was okay. It does break the video game “fourth wall” or something like that because the narrator/dude that’s talking to you and guiding you throughout the “game” really feels like he is talking to you. The voice acting, graphics, and sound/music were simple. If you have a similar humor to what was in this, then you’ll most likely have some laughs with it. I mostly played this for the achievements, but it’s since it’s free, maybe give it a try for yourself.

Shadow Tactics: Blades of the Shogun

Good Stuff: One of the most challenging games I’ve ever played, it’s personally almost up there with Cuphead & Hotline Miami. It’s the longest one I ever played too on Steam at least (53 hours logged as of right now, though I believe I finished the main game around 44 hours). I loved and hated it at times. I’m gonna dedicate a post just for this game sometime, so if you are interested in that, maybe keep an eye out!

Oh boy. Thank you very much if you’re reached the end or even just for simply stopping by. I’m sorry if this was too long and if the formatting is busy. For now, it’s honestly how I thought I’d log my progress!

Also, I’d like to know how to embed the Steam games & my stats on the post (plus, the drop-down option to add some written text) , if someone has tips on how to, it’d be very appreciated!

IT’S TIME TO BE AN ASSASSIN AND SLAY MY BACKLOG

Hello. Nice to meet you. I hope to share my thoughts (or ramblings I should say, heh) about games here… like an online diary to keep track of failures, successes, progress, etc.. And to read you folks’ posts as well. :-) Alright cool, see ya later fellow Assassins and good luck with your own backlogs!