The more games I play, the more I realize I’m not a fan of Zelda-style dungeons, but this game is just bad. 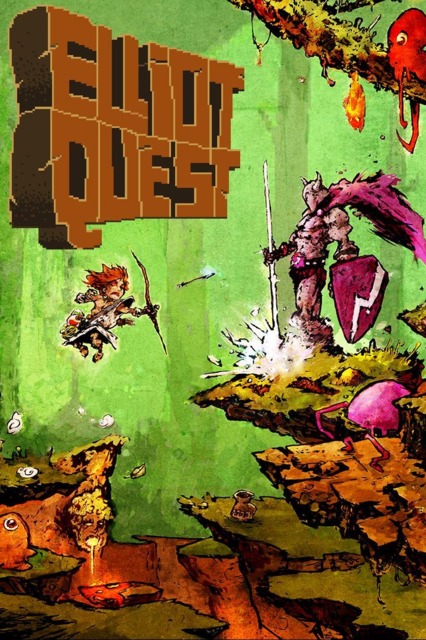 This is a platformer/adventure game with RPG elements and Cave Story momentum. Left/right move, A does a full jump (no short hops), X shoots an arrow that starts to descend after a couple units, Y uses whatever item/spell you have equipped, B of all buttons brings up the pause menu (where you equip items and assign XP), and select brings up the options menu (which is how you toggle fullscreen since the game always starts windowed). Start is unused.

The RPG mechanics are slightly unique since increasing STR doesn’t have you deal more damage; it instead increases the distance your arrows go before they fall, so you’d want to increase AGI so the game won’t make you wait so long before you can fire another arrow, and then you’d want to increase ACC so you have higher critical-hit chances. Also, there’s an arrow you can buy in the second town, but as far as I could tell, it doesn’t actually increase your damage, either (all enemies still took the same amount of hits to kill).

The game starts you off on the path to the first dungeon, and if you look past the bland level design, it’s okay at first. Thing is, if you know Zelda dungeons, you’ll know they not only have an item in each, but also require you to use that item to progress. In the case of this game’s first dungeon, the item is a shield, and you need it to block projectiles in a certain hallway (and then never again). Problem is, this hall is one way in a split path, and the shield is the other way, so if you go the wrong way first, it looks like you should be able to make it through that hall, but you’ll take damage at the end. This dungeon also has shielded enemies that you can’t damage, but are required to kill in order to progress. How do you defeat them? Simple: you just stand there and WAIT for a few seconds until they decide to lower their shield, and then they become vulnerable (but only for around 1-2 seconds because then they’ll attack and put their shield back up). In the second dungeon, there’s a couple halls that have lava rise and fall, so when it rises you have to wait a couple seconds for it to fall, which wouldn’t be much of an issue if the game didn’t put the boss key before it and the boss door after it, so if you go the wrong way by accident (again), you have to backtrack and wait some more. This game could really benefit from being able to fast-travel between save points.

The game tries to teach the player things without using dialogue (when you get an item, it just does a fanfare and puts it in your inventory), but it doesn’t always work. For example, when you beat the first dungeon, you get the tornado power, and the last room has foliage tiles, so you use the tornado on the foliage and you zip right through them, instantly putting you on the other side and destroying the tiles in the process. Later on, you’ll go through a mini-dungeon and get the bomb bag, which lets you lay bombs to destroy a certain circular rock tile that you’ve seen blocking other paths. After this, you hit a dead end. There’s an area on the right of the map that has an updraft, but jumping into it just has you fall down into the spikes. Turns out, using the tornado power on the updraft is what lifts you up. A similar issue happens when you beat the second dungeon: you get the fire shot and encounter an unlit lantern so you know you can use the fire to light the lanterns, but those crates you’ve been using your arrows to destroy one-by-one can also be destroyed with the fire, and it also destroys all adjacent crates as well, and wouldn’t you know it, this little mechanic is also required to progress. Of course, it’d be too easy if it showed up in a dead end like the last one; instead, the first crates you’d need to destroy with this method are blended into the ceiling of an area two rooms away from the dead end and three rooms away from the entrance! You’d think it was a come-from the way it was designed. Yes, I had to look up a walkthrough for both of those.

When you beat the second dungeon, you’d think you could go to the north part of the map and start heading for the third dudgeon, but if you try that, you’ll be met with dead ends, but not after you have to go through a couple screens of enemies and hazards (why can’t the roadblocks just be put up front?). Instead, you have to go to the southwest to a rainy forest where lightning will make the entire screen (except projectiles) go white for an entire half-second, then having a single frame of visibility before flashing some more and going back to normal. After a while, you’ll reach a dead end and be told you need to collect 4 turtle shells, but the turtles are invulnerable to your arrows, so how do you kill them? Another trip to the walkthrough shows you need to use bombs. Thing is, unlike the Zelda games (where some enemies also require bombs to defeat), this game never has bombs drop from enemies/crates as a collectible. They can drop from crates, but you can’t collect them; they’ll explode after a couple seconds and hurt you if you’re near them. They can drop from turtles, but again, you already need bombs to kill them in the first place, so it’s a moot point. The ONLY way you can refill bombs is by going all the way back to town and buying more.

That stormy area also has a couple switch-hunts where you have to light the torches to move the blocks, but there’s no indication which torch moves which block, yet you need to move the blocks in a certain order to progress, so it’s just trial and error.

To get to the third dungeon, you have to pay an NPC to fix the bridge, and crossing said bridge leads to the white palace you saw on its other side on the overworld. This is the part where enemies start shooting projectiles at you, and while they don’t move fast, they certainly move faster than your character can move, which helps explain why the level design was so bland up to this point: the game’s controls aren’t conducive to challenge. When you make it through the white palace, you’ll be placed on top of the white palace on the overworld and you’ll realize that whole area wasn’t actually the third dungeon despite being as long as them and having a powerup of its own. Where to now? There’s an area with ripoff Gerudo Valley music and a cyclops that triggers an earthquake as soon as its onscreen that’ll deal damage if you happen to be standing on the ground, but that path leads to a dead end after three rooms. There’s a cave that puts foreground objects in shadow in favor of a bright background, but not long into it, you reach a hall where you’re being chased by a spike wall; problem here is that there are a couple points where you need to run forward in one branch to hit a switch, then run backward, towards the spikes, the first time being 20+ units or so, so maybe I’m still missing an item? Lemme check that walkthrough again…wait, I MISSED the dungeon?? Yup, turns out the white palace on the overworld isn’t representative of the white palace you already went through, but is instead actually the third dungeon. That exclamation point that shows up when you get past the white palace isn’t actually to go back the way you came (like it is in every other instance), but is instead to enter the third dungeon. The dungeon itself has those teleporting mages that shoot at you before going away again (yay, more waiting) and earthquakes that don’t damage you, but instead just have blocks fall from the ceiling (blocks that look identical to regular ceiling tiles, some of which fall quite late).

Despite all that, I didn’t give up until I made it to the fat bat miniboss in the upper-left area of the map. For one thing, it shoots a stream of projectiles at you, and while they don’t seem that fast if you’re just watching a video, they move faster than you can move and are made harder to dodge by the game’s momentum. However, what puts this boss over the top is that the boss is too high for you to attack with your arrows; the only way you can hit the boss is to use the magic attack you got at the end of the third dungeon, so if you run out and you didn’t put points into INT to get the MP regen ability, you have to wait for a single normal bat enemy to show up and HOPE it drops a magic refill on its death (because it’s random what drops), but even that may not be enough to use your spell one time. No wonder the guide kept recommending we put our XP into INT; the game is irredeemably tedious without it! For the record, you only needed magic for switch-hunts up to this point, and there was always plenty of jars to break that could contain MP refill, so this comes out of nowhere.