Just in case being a Wii U fan wasn’t hard enough, another exclusive got a 3DS port with additional content. I’m glad I waited, now. (Devil’s Third for 3DS when?☺) 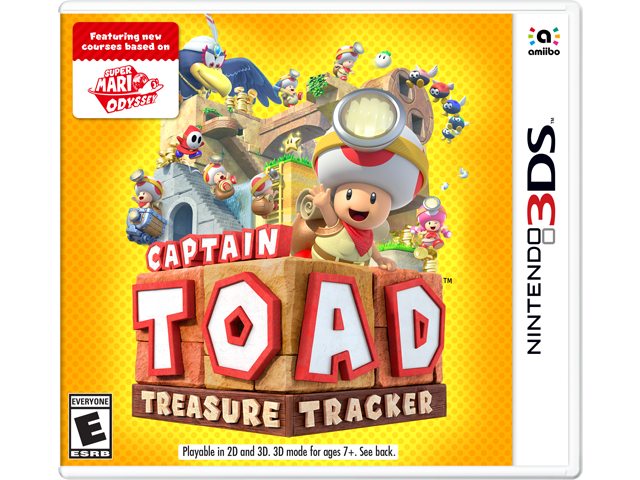 This is an action-puzzle game (which, if you remember my Sutte Hakkun post, is just a catch-all for action games that don’t fit into an already-established genre, regardless of how much emphasis they have on actual puzzle-solving). You can move and pull plants up like in Doki Doki Panic, but you can’t jump. You can still kill enemies by falling on top of them or throwing an uprooted vegetable at them (though if an owl stomps on the veggie you’re holding, that won’t hurt it and you’ll lose your veggie).

Due to the 3DS’s lack of a C-Stick, you have to drag the stylus across the bottom screen to rotate the camera, which can be awkward at times since your left hand will be carrying the majority (if not all) of the 3DS’s weight. You could also control the camera by using the L and R buttons, but those won’t snap to 45/90-degree angles yet move too quickly to be very precise (plus, they can’t tilt the camera up or down); combine this with the fact that some levels require touching platforms to move them, and it’s better just to ignore the shoulder buttons entirely.

The main objective of each stage is to reach the star, but each stage also has three diamonds in them, and you’ll need to get most of them to progress. Most of them aren’t hard to reach: you just need to rotate the camera until you see where one is, and at that point, figuring out how to reach it (and actually reaching it) usually isn’t difficult at all. If you ever miss a diamond, chances are it’s because you didn’t put the camera at the right angle to see a certain detail of the map rather than any kind of clever level design. Likewise, if you do see where a diamond is, but don’t see any way to reach it, chances are you either need to throw a veggie/enemy at it (which the game relies solely on brand-recognition for it to be intuitive) or you just need to keep going forward until you hit an obvious switch that makes the path to the item possible.

Each level also has an achievement associated with it, and these can range from “defeat all enemies” to “collect X amount of coins” to “find the hidden X” or even “don’t defeat any enemies.” However, the game never tells you what the level’s achievement is until after you beat the level, and what’s worse is that some achievements run counter to collecting all the diamonds (e.g. “beat the level with only one shot” when you need at least two shots to clear the way to the star and get one of the diamonds), so achievement hunters: I hope you like playing the whole game twice for no reason. You do get the achievement if you happen to meet the conditions on your first win, though it can be tricky to anticipate what the achievement might be.

However, the single worst part of the game are the fan platforms. At first, it seems like a harmless gimmick: blow into the mic to move the platforms, then stop blowing to let them move back. The problem comes in with the fact that the microphone works by vibrations: blowing into the mic hole vibrates the mic, which lets the system know the mic is being used, which the game interprets as a command to move the platforms to their forward positions. Unfortunately, blowing isn’t the only thing that triggers vibrations. For example, if you happen to be playing this portable game while riding in an automotive vehicle that is currently in motion, the whole automobile will be shaking, which will in turn shake you, then the 3DS, then the mic, which means the platforms will always be at their forward positions. In other words, you can’t play this game on road trips! You can try covering that mic hole all you want; it won’t stop them. I’ve never been more glad to be stopped by red lights (and even then, the engine’s vibration can sometimes trigger them without warning). Oh well; at least that’s how I found out that blowing into the mic gives you an audio-cue when a diamond is nearby (IIRC the game never tells you this).

Besides the game’s standard action levels, there are some rail-shooter levels where you hop in a mine-cart and aim and shoot at things in first-person. These are the easiest levels since it’s impossible to lose; the only thing you need to worry about is trying not to miss where the diamonds are.

There are also some “boss” stages, though they’re really just another type of level since you have to scale a cylinder while dodging a dragon-snake-thing that spits waves of fire. Even though you can see the individual fireballs, you won’t be able to squeeze in between them without taking damage; you have to take cover behind other platforms. There will also sometimes be lava droplets that fall from above and block the path for a few seconds; not only are these more annoying than challenging, but it can sometimes be hard to tell where they’re going to land, even with the 3DS’s 3D.

The game’s actual boss is decently designed, but it gets recycled as the final boss with little change to its pattern, which makes the final boss rather easy. In fact, the game as a whole is really easy, with only a few challenging levels showing up around half-way through the last chapter (though I guess that’s to be expected from a title in the Mario franchise).

Lastly, if you look on the back of the box, you’ll see the game boast about having “more than 70 worlds,” but the main campaign has 64 levels, so the cynic in me thought there would only be, like, six new levels in the post-game. However, I was wrong: there are FOUR new levels in the post-game, with seven being recycled stages from earlier (ugh, it’s Super Mario 3D Land’s post-game all over again). The only difference for the recycled stages are either 1) you’re gathering your team-mates instead of diamonds (they’re either in easier to reach spots or the exact same spots as the diamonds, but you have to get them all to reach the star), or 2) you’re being chased by an evil clone that follows your every move, and two out of three of those levels already have time-pressure built in with collapsing platforms (great choices, you guys!). The only thing to watch out for is that the team-mates won’t follow your every move because that would cause minor graphical clipping; this can result in them not getting on the moving platform with you or even being left behind entirely with you having to go back and get them. Also, the game apparently counts the impossible-to-lose chapter prologues and high-score bonus levels as “worlds,” so I think it’s safe to say that’s some sketchy advertising.

Overall, this is an okay game. I think $30 may be a bit much for what it does (and $39.99 is really too much, so go for a physical copy since they’re discounted), but it doesn’t have any major problems aside from the fan platforms, so you can’t really go wrong by getting it; just remember to bring at least one backup game with you while traveling.