I’ve been sitting on this post for about a week; I should probably go ahead and upload it before it goes the way of my Roundabout post. 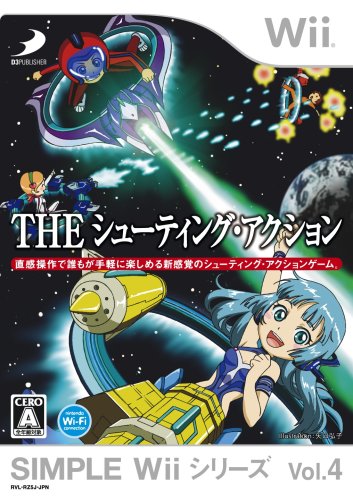 This is a twin-stick shooter. Nunchuck’s joystick moves, WiiMote aims, A button shoots, B button uses a special attack (can only hold 3 at once), and the C button dashes (can be used to dodge bullets). There are four ships to choose from: spread shot, laser (goes through obstacles), homing missiles, and electricity that explodes when it reaches where the opponent was when you fired. Each ship gains experience as you get hit combos, capping off at level 3 (level resets when you go back to the title screen). Arenas are all square, only differentiated by background and placements of obstacles (I thought obstacle placement was random, but after tinkering around with the multiplayer mode, it looks like placement is static). Sometimes, there will be metal boxes you can shoot open to get power-ups, but your opponent can get them, too.

The main campaign is a gauntlet: 8 worlds with four battles each. You fight each type of ship once per world, though they’re in different orders each time. That may seem repetitive to those of you who prefer when games regularly introduce shiny new mechanics to jingle in front of your face at regular intervals, but this game keeps things interesting by increasing the aggressiveness of the AI, making the game more difficult as you progress. To be fair, the game does take 3-4 worlds to pick up the pace, and those earlier battles can really drag on (it took me a while to realize I had to drain the stationary opponent’s HP completely in the tutorial before the game would let me start the campaign).

I do have one major criticism for the game: the ships are differentiated by weapon, not by player. This means that if, for example, both you and your opponent have the spread shot, the screen will inevitably be filled with tiny blue dots, making it nearly impossible to recognize which shots are enemy fire, much less dodge them. This means that, even if you do win, you’ll be low on health, and your health doesn’t regenerate after each battle, so you just have to hope that the next arena has a healing item or an extra life (though losing a life just re-spawns you right there with some invincibility frames). Apparently, what Famicom Wars did in 1988, this game couldn’t do in 2007. I knew the game was a budget title, but how hard can that be? Maybe they could’ve used the resources they did on the character creator to make a dynamic palette for the ships instead.

There are a few other modes besides the campaign. There’s endless mode, where you just keep fighting opponents until you lose; time attack mode, where you keep fighting opponents until time runs out; and “Destruction” mode, where you fight waves of regular little enemies until you lose. The other two modes are okay for what they are (though I was satisfied after the campaign, so I didn’t play endless mode much), but Destruction mode will have enemies just spawn in random parts of the arena, so you’ll inevitably take damage when they spawn right on top of you. This really disappointed me since this is the only mode where you fight normal enemies instead of other ships. Plus, while the other modes would zoom the camera in and out to keep both ships on screen, Destruction mode has the camera at a static zoom, at a position where you can’t see the entire arena, regardless of where the enemies spawn (though it still tracks your movement, of course).

There’s also a multiplayer mode, which supports up to four players, though I don’t exactly have the means to test it out.

So, do I think this game is worth fifteen US dollars? Eh, not really. For what it is, it’s okay at best, though the game could really use better ship differentiation (especially regarding the spread shot), and Destruction mode could also benefit from some extra polish.