Trials of the Blood Dragon

An enjoyable spin off/sequel to Blood Dragon, using Redlinx Trials engine.
Its a weird one to discuss, its the least polished Trials game. If Blood Dragon made you question "Why?" Than Trials of the Blood Dragon, makes it clear that, however makes this, they are only interested in continue the story and style regardless what they are given.
Ubisoft´s low effort of appeasing with something that isnt at all cut out for the job, even though they have had 2 Far Cry spin offs already, with Primal and New Dawn, the latter is completely unremarkable.
This, just to say, Blood Dragon 2 would be a better game, and Trials of Blood Dragon was probably not a good idea.

The physics are alright for motorcycles, But that's clearly not what's in store. The ones who wondered why this wasn't a dlc shortly found out why.
They added other vehicles, on foot sections that are floaty as hell, there's gunplay and i advise using a controller, space sections, a small RC car that breaks the laws of physics and moves completely different from all the rest, space sections that i bet everyone hates.
overall it's more action oriented, generally you are going through the level in a faster pace, occasionally killing a few enemies.

Not a great game, but between you and me, it's totally worth it. There's content variety despite its short length, its creative, and completely bonkers. Seriously, one of the levels is a Boss Rush, how can anyone not have a soft spot for this.

Remember to look for the 5 keys to open the not so hidden safe. Theres some fun stuff in there. 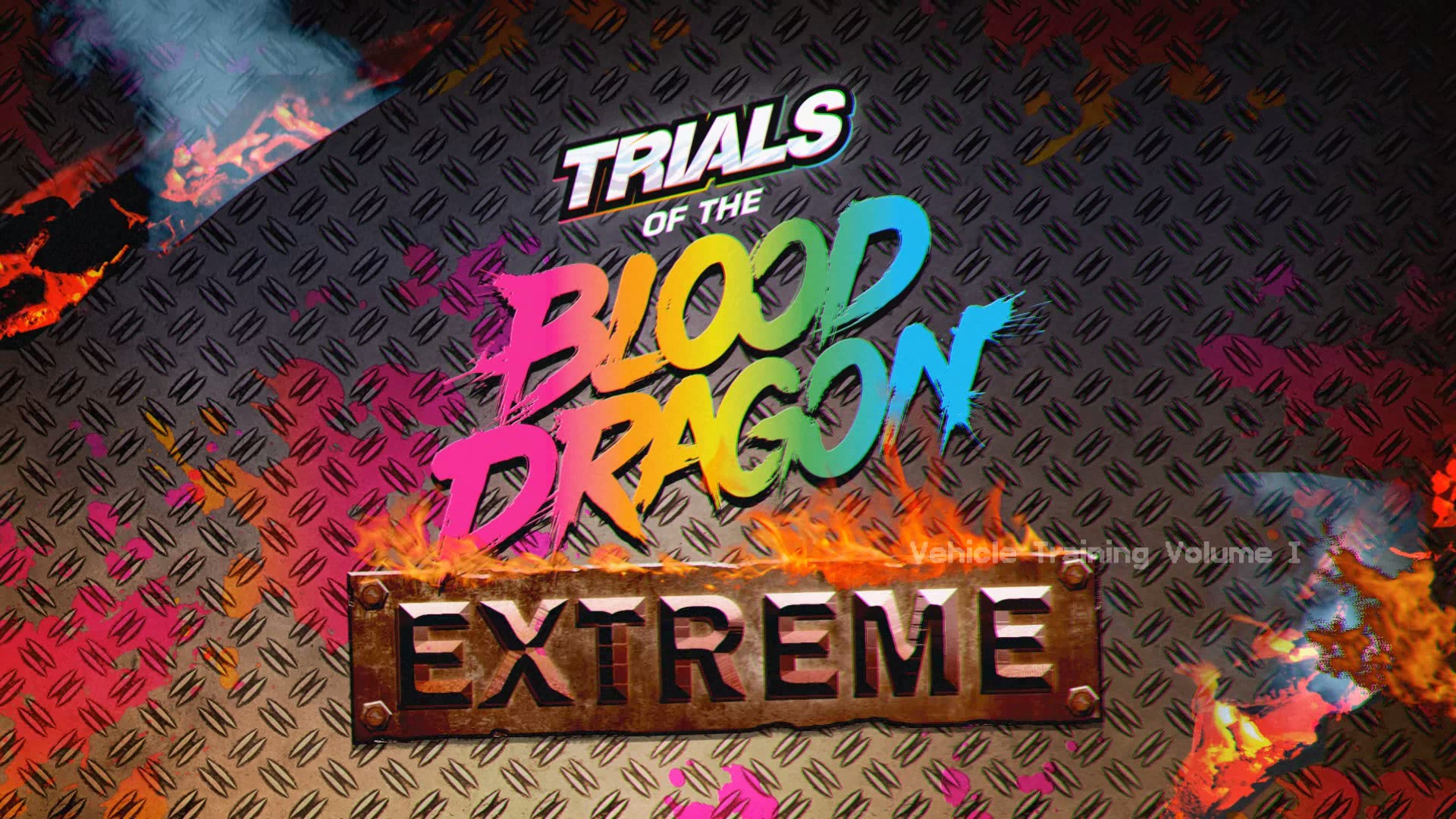 it caters to my tastes, im not quite sure it would still hold up on its own. I think horror fans will appreciate it.
You can break down the title to REM MOTH MOTHER RED. And each one is present in game.
Italian made game influenced by western culture.
It checks boxes on:
Silence of the Lambs, as you might be able to tell from the obvious similarities between the main character and Jodie Foster.
Res 7, gameplay and set pieces. At least when it comes to open house location, stealth and hiding location. Consequently even a bit of Texas Chainsaw found its way in there
Lastly, Italian movies in general, particularly Giallo when it comes to storytelling.
Also, all this...
- Sexuality is a prominent theme
- Plot is intensionally broken down in favor mistery
- villains tipically strangely dressed, wielding less conventional weapons
- only women are victims
- Villain Troubled childhood and upbringing
- long plot exposition dump of big reveals and villains explaining their actions to the main character.
- The possibility of there being more than one murderer all along.
- Main character unknowingly gets near a corpse
- Regular person is investigating the case.
- pseudoscience
- Strange DREAMS or hallucinations.

Remothered wears its influences, in part it requires an acquired taste, for being less commercial horror than the majority of games. I wouldn't even say, the reveals would be worth for everyone. I think horror fans would appreciate it as a whole for what it is. Though, everyone would likely appreciate the small details and character backgrounds. The story is open ended, as this is only part one with only a few hours of gameplay. While, it also leaves some aspects open to interpretation, even if the identity of Madame Svenska is somewhat obvious, it means a lot to me, that it does its best a telling a story, instead of explaining a story.
Opening cutscene shows the mysterious Madame Svenska talking to a journalist. The topic, a strange illness. Not primarily a disease, but non conventional science, secret experiments, disregarding secondary effects or inhumane treatments.
Svenska remembers the story of Rosemary Reed, Who forces her way in Felton's house, by pretending to be investigating his strange decease and a drug called Phenoxyl. her objective is to confront Felton over the disappearance of his daughter Celeste.
Rosemary notices signs of mental illness. That however doesn't stop her from Trespassing, after she is ordered to leave.

Theres nothing particularly great nor bad about the gameplay itself.
You roam through a large open house in search of clues.
A few areas are initially closed and require searching for some items and find their usefulness, basically solving small puzzles. Items and puzzles are highlighted and hard to miss.
All the while hiding or running from a psychotic drugged up murderer.
The level design, save points, sound queues, do a good job at directing you towards progress, in some moments. So hopefully, you won't get lost too often.

Most of remothered is stealth and exploration.
Throw or set distractions as means of clearing the way from enemies. seems like enemies are often either spawned, or scripted to move towards your location once you complete an objective.
It's not particularly repetitive, this is a short game after all. For whatever reason, getting the enemies attention and running to a hiding spot seems a more attractive option than to simply throwing or placing a distraction to clear the way. It's even possible to hide behind large objects like tables or counter.
The later portions are more action oriented, with a few chases and qte events thrown in.

I felt more interest towards story and characters, i wouldn't mind sitting for 10 min watching a cutscene. which Is not to say the gameplay was bad, i thought it was quite alright. It works fine, AI wasn't unfair or buggy.
I mostly have smaller issues, that hopefully won't be repeated in the sequel.
The one that stood out the most was voice mixing. It's far more noticeable in game, than cutscenes.
it seems enemies are equally loud, if they stand right above on the upper floor. Creaking wood is fine, but voices should be lowered, as it is important to be aware of enemy location.

Save points are taken from Enemy Within, though that doesn't excuse it from introducing them properly to new players. I'm not making an assumption that different players would not be aware of this mechanic. I just find introducing a mechanic over text and following that up with a different save system to be unnecessary when, you have a save point right at the end of the floor corridor.

I'm also not a fan of quick time events, but if you do have to use them, refrain from using mouse buttons.
It's hard to keep your fingers from instantly clicking, when they are resting right above them. It doesn't help that the icon for RMB and LMB won't be clearly distinct from one another, like a controller button or a Key would be.
Made even worse by lowering the qte over to the bottom of the screen, which also delays that reaction, since its not where im looking at.

I get that they don't wanted to clutter the screen with button presses, as it takes from the atmosphere, than again...quick time events take away from the experience. They are cinematics, requiring the player to click a button doesnt make the set piece more intense. 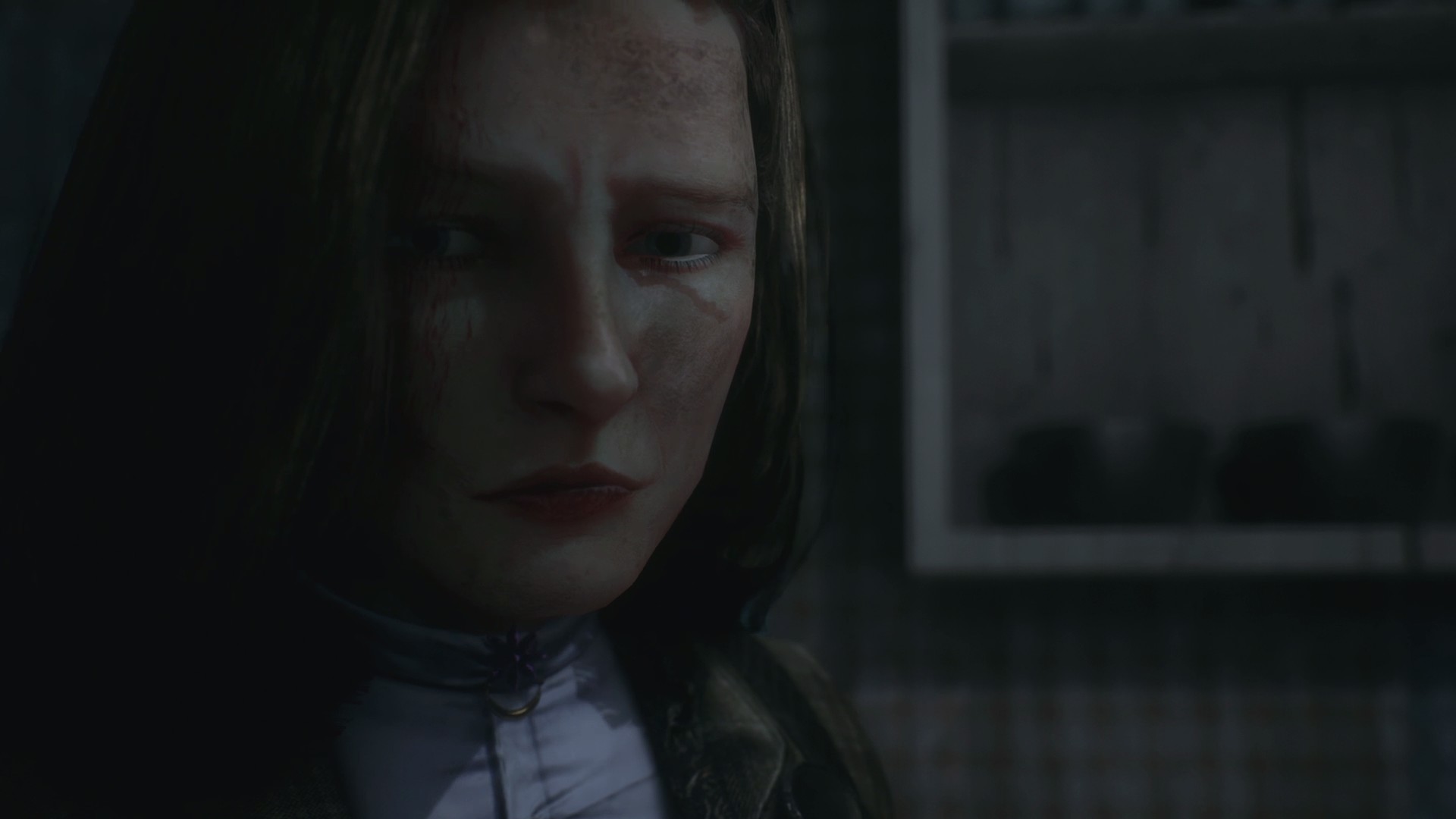 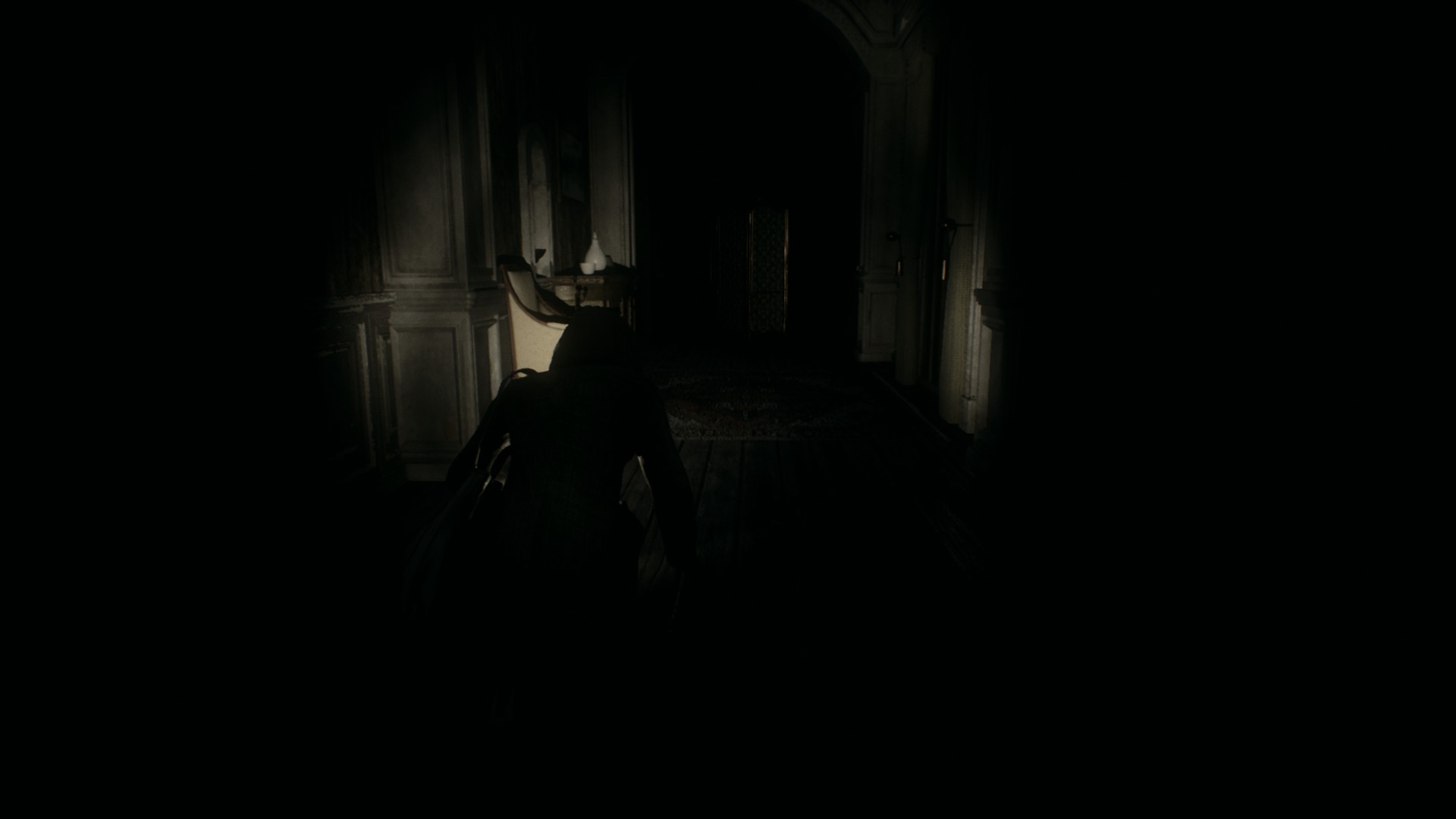 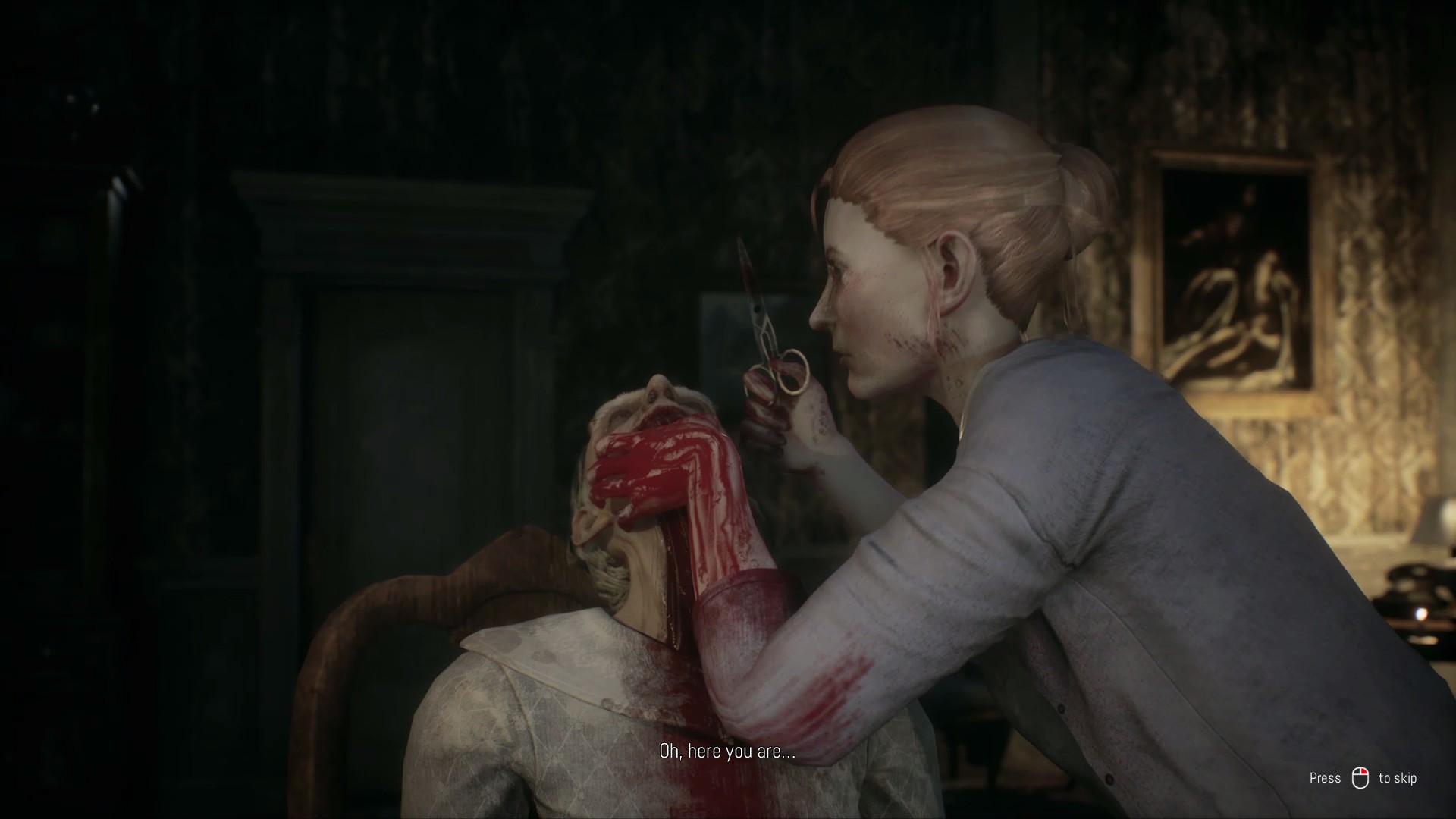 Swery liked it and that's how little it takes for me to check something out. I will never say about american developers, the industry doesn't really have space for an individual voice, and honestly i cant even stand them when they take their frustration over to social media.
Anyway, this is a good point and click, and don't worry, it had very little in common with Swery´s work. Its goes towards the surreal and it does finish every chapter with a quick quiz that also works as a summary. Thats about it.
it's really well written, i've enjoyed looking for logs. It does help with the murder mystery aspect that you never speak directly to any of the possible killers, instead you read, documents and texts around the house.

this game was probably just 1 hour long, but i enjoyed most of it.
It's cool that you can actually die, but these moments and a trial and error hide and seek minigame
I think, the way they were presented, that the inventions are a bit underwhelming.
And the point and click controls and movement are slow and limited, which perhaps works better with VR, but thats something i have no interest whatsoever 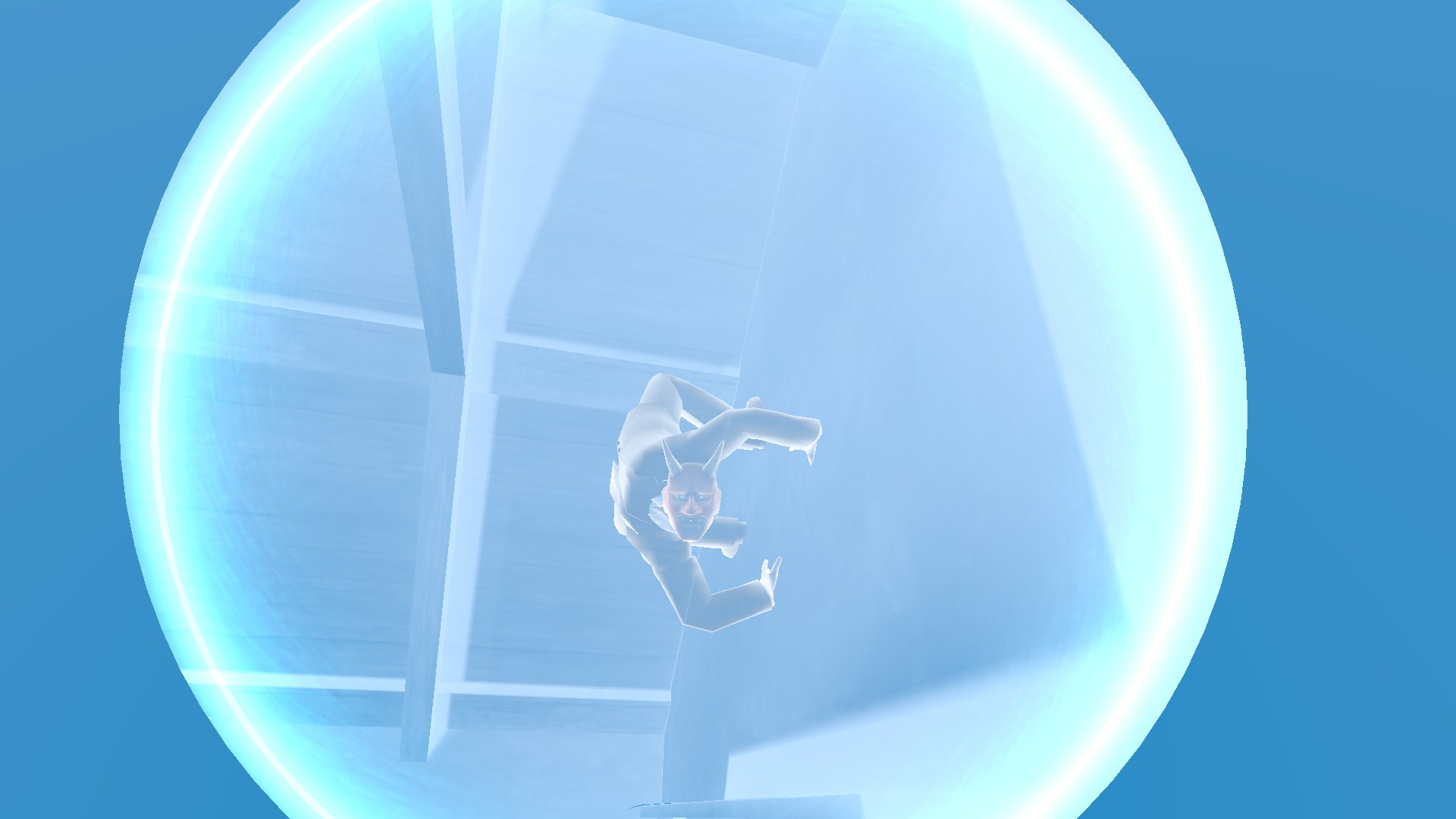 Its an arkanoid on a puzzle bobble board. Except heavy on power up usage.
levels are gonna have a few power-ups laying around the board, each one is a different character. Collect those, while you are still building up a meter.
Once its full, you can use your character´s ability, depending on which power up you are using, if you are using one at all. Essentially, rack up points to build meter, collect power up, use current character´s ability. Repeat the process.

The main objective is to collect the stars on the board, in puzzle bobble rules, these can fall along with other pieces when they are no longer connected. And you really need them to upgrade every ability

Was it worth it? Not really
the paddle sucks, i can't really find a good angle. If you hit the ball near the edge of a normal paddle, it typically, or at least those are the rules, the ball is sent in the same direction, its probably better not to think too hard about the angles right?just that there where specific rules that worked and we accepted them . here, the middle area has a larger vertical hitbox, and it always sends the ball back on the same exact angle. Because of the eyes, even if i hit dead center, it's not guaranteed it will have anything near a simetrical path.