Platformer. Left stick moves, A jumps, X attacks. You start off in red form, which has a shield with the B button and unlocks a down-stab after a few levels, but as you progress, you’ll also get a green form (ranged attack with X, double jump, dodge with B) and blue form (float by holding jump, toss gravity-affected projectiles with X) which you can switch between with the shoulder buttons. Controls are almost done well, but too many things have a baked-in delay before you can do anything else (can’t move or jump during attack animation, can’t switch colors twice in a row if you accidentally switch to the wrong one, the down-stab stuns your for half a second when you land, etc.). It might not seem like much at first, but when you make it to those late-game levels that demand more precision and quick reflexes, it will feel like the controls suddenly become unresponsive right when you need them the most.

Oh, you also get “nebulas” after beating certain bosses, which augment your attacks when equipped. I barely used these and often forgot about them; I only bring them up because you swap which Nebula you have equipped with the D-pad, the thing normally reserved for movement. There were a few times I’d try to move with the D-pad (sometimes while being attacked by enemies) and wonder what was wrong.

The first issue I had is with the camera. Especially near the beginning, it’ll sometimes zoom in too close, as if the game was originally built for smartphones. There’s also one part where you need to be red so when you touch the red platform, it’ll break and you’ll fall down; however, the room below has a spike floor, with the only way to avoid damage being another red platform, which of course will also break because you’ll still be red. The reason you won’t see the platform coming up? The camera places you at the bottom of the screen while you fall. Heck, there’s even this one screen transition that not only puts you right by a cliff, but the background is the same color as the solid tiles! 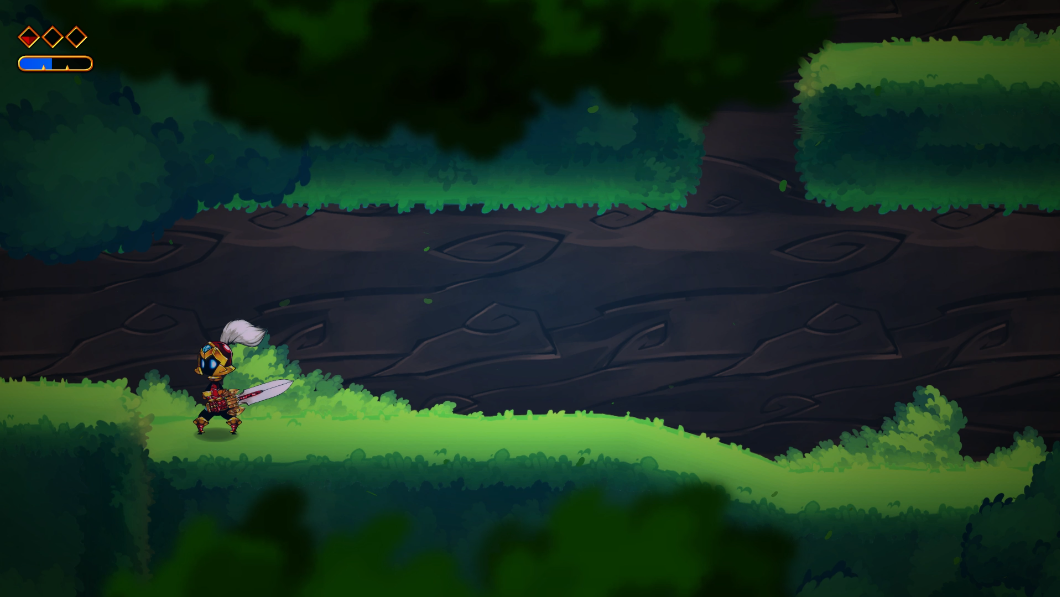 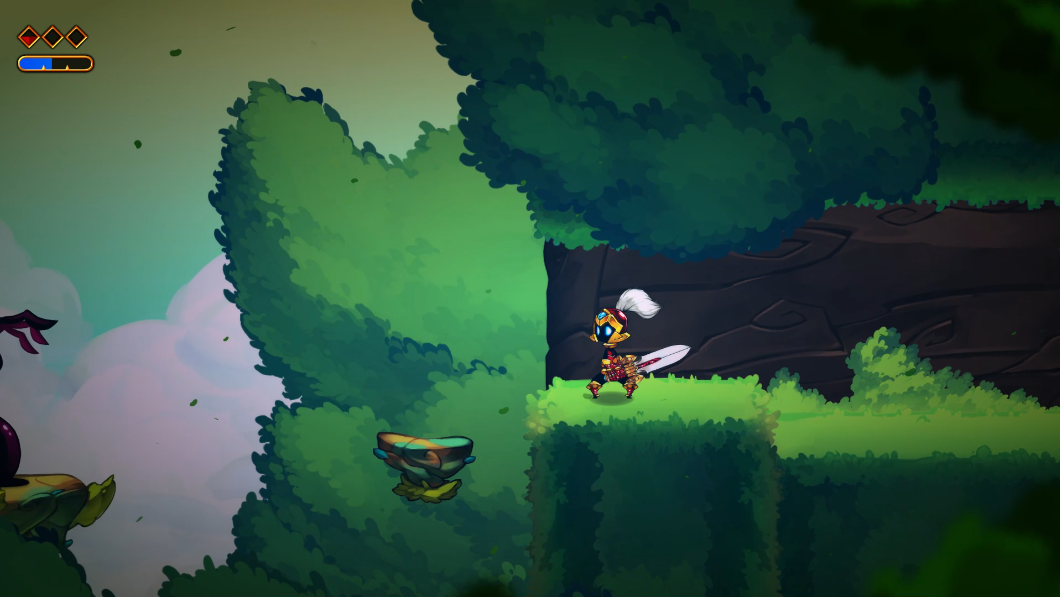 Still, the camera issues are rather rare. A much bigger issue is that the majority of enemy placement is bland. The game wants to be part hack-‘n’-slash with its three-hit combos and grounded enemies that’ll chase you, but what this actually results in are long, flat rooms where you can just jump over the enemies without consequence. It’s honestly kinda sad how often the game does this. There are some lockdown segments where you have to fight the enemies in the room to progress, but those are only marginally less mediocre. There’s also this one hall that has a bunch of the basic blob enemies, but the ceiling is too low for you to jump over them, so you just gotta stand there tapping the X button until they’re all dead. The worst are the sandworms in world 4, though: the only indication of their location are little sand-bumps on the ground, but then the game often blocks them from your view with more swarms of blob enemies, so you’ll have no time to react when they suddenly burst out from under you. At least the world 4 turrets merely blend in to the ground tiles instead of being completely obscured from the player’s vision.

That said, the game does get enemy placement right a bunch of times as well. For example, world 2 introduces an enemy that’ll shoot three projectiles before taking a break, and the game places some of them on moving platforms among other small platforms you need to jump across.

There’s some waiting for stage hazards to get out of the way as well. It’s not as bad as other games I’ve played, but it’s still noticeable how often you’ll have to come to a standstill because there’s a lavafall in front of you or something. It’s much more of an issue with bosses because most of them are wait-for-vulnerability fights, and it can take quite a while for said vulnerabilities to show up, leading to the attacks becoming repetitive. Notably, the world 4 midboss makes you do the Ocarina of Time Ganon “play tennis with a projectile” thing three times. Still, as far as wait-for-vulnerability fights go, they’re mostly designed pretty well, but the world 2 midboss takes things too far. See, it’ll have a spotlight appear where you’re standing, then after a second or two, it’ll fall down on that spot and jump back up, leaving you to wait until the spotlight shows up again. You’re probably thinking that you’d attack the boss when it comes down, right? Nope, it’s invulnerable until the 3rd time its pattern loops, and then the pattern repeats with absolutely no variation or even speed-up (once again being invulnerable for two more drops). And then after a couple levels, you have to fight the mid-boss again, still with no variation to its pattern. The only change is that the arena is slightly different; it’s blander (no spike floor and platforms, just a standard flat arena with a couple large blobs at the top tossing little blobs onto the ground that die in one or two hits).

The dark cave levels suck. You can only see a unit or two in front of you, so thorns and exploding mushrooms can come up on you abruptly (at least you can see enemies’ eyes). Then, it introduces boulders, but it does so with one chasing you, and the platform you need to jump on to progress is missable, meaning you can get trapped between the boulder and the wall. Afterward, boulder segments are just more waiting; they pass by, you move forward to the next small hole in the floor, then wait for the next three-boulders-in-a-row to roll over you before you continue to the next small hole. Luckily, this type of level never shows up after world 2.

World 3 has a single bland SHMUP level whose mechanics are never used again.

World 3 also has a midboss that’ll teleport from the right side of the screen to the left when you get close enough, but immediately go back to the right side when you cross that same threshold again. You recently got the blue power, so you can intuit that you have to use the stun projectile so you can get close enough; thing is, the stun projectile suddenly disappears after traveling a few units, meaning you can’t reach the boss when it’s on the left side, and when it’s on the right side, it can travel vertically behind a wall. Although the stun projectile can go through walls, your regular attacks can’t, meaning you’d have to be right next to the boss to attack, but then you’d get hit with contact damage as soon as it gets un-stunned. It’s not technically a wait-for-vulnerability fight, but it still manages to have issues.

IIRC the final boss is the only other boss that isn’t a wait-for-vulnerability fight, but it takes place on a mini-planet (where walking one way has you loop around to the bottom and back up). Thing is, unlike other games’ mini-planet controls, standing on the bottom means left moves you right and right moves you left; not only is that unintuitive, it’s the exact opposite of the game’s own earlier stand-on-ceiling controls. Then, when you more-or-less get used to the new controls and make it to the third phase, it adds falling meteors to the laser-chase part of its attack, but despite the pretense of fairness, the meteors fall on places where you’d have to be in order to avoid the lasers since said lasers move at the same speed as your movement speed. After a few retries, I realized the game wanted me to stun the laser spawners with the stun projectile, but you wouldn’t think to do that while it first happens (let alone have enough time to stop and attack since attacking stops your movement, giving the lasers time to catch up). As if that wasn’t bad enough, the fourth phase has no clear weak point; you just avoid attacks until an abstract icon appears at the bottom of the mini-planet, which is all the game does to let you know that you have to use the down-stab attack there in order to finish the fight.

Overall, I always appreciate when a platformer actually focuses on platforming, but bland enemy placement and annoying boss decisions bring it down somewhat. Wait for a sale.

P.S. For those of you who care about story, keep in mind that the game abruptly ends on a cliffhanger despite implying there’ll be a world 5 (or at least another boss). EDIT: And the game dares to call itself the “Complete Edition”!