I changed my plans quite a bit and decided to tackle a few short adventures in the broadest sense. I chose some which have no achievements on Steam to be able to flag them as “completed” once I’ve played through them.

I had already flagged the game as “completed” in my first post but felt inclined to write what I think about the game. At first I thought it would be a nice game to play with/as a child, however the game gets progressively darker. I also liked that the characters in the game only speak gibberish, but you still always know what is happening because tone as well as non-verbal communication are very telling. “Brothers” also succeeds in creating an atmosphere that draws the player in. Storywise, it do not think that it is great, but I’ve also experienced worse plots. Overall, I would certainly recommend the game if all these things sound like something you might enjoy. 8/10

An adventure that mostly consists of Hidden Object sequences, but also includes other puzzles, some of which if found quite fun, while others were very annoying. Moreover, the graphics make some of the puzzles harder than they should be because of a high degree of pixelation. However, what annoyed me most were some details. Robinson Crusoe, not having seen a human soul for years, for example, apparently thought it would be necessary to place a “do not trespass” sign near his hut - a stranged thing to do if you’re yearning for human companionship. In addition to that, you can see a ship passing not far from the beach of the island - which makes you wonder if Robinson is even attempting to get off the island. There might have been a few other minor inconsistencies which still bothered me nontheless. Another aspect which left me with a bad taste in my mouth was the question of ethnicity. Robinson is portrayed as English, but so appears to be Friday. However, the latter has to be saved from evil cannibals, which are black. Maybe I’m a bit oversensitive in that regard, but I found the whole constellation a bit unfortunate. The Story is probably known by most people anyway, although there are a few little deviations from it, which however do not improve the plot. Nevertheless, I think that the game is an okay adventure that you can play if you enjoy HOGs and similar games. 5/10

The first thing I thought when starting the game for the first time was how hideous the starting screen is. I’m glad that I decided to try the game anyway, because the quality of the animations in the game itself are of a much better quality. The story is not great, but due to the variety of the minigames (which you can later play again in the main menu) and characters one encounters I found the game enjoyable anyway. Some of the puzzles are very easy, some a bit tedious (and one or two got me stuck), but you have a variety of customisation when it comes to help for these (ranging from rather rough explanation how a minigame works to the option to skip individual ones entirely). Unfortunately, the game failed to draw me in atmospherewise, but because I found most of the minigames quite enjoyable I did not mind. 6.5/10

I might start another adventure, but because I bought the new Mass Effect I expect that my backlog might suffer a bit more in the near future…

Sorting finished and plans for next games

I’ve finally reached a point where I’m relatively satisfied with the categorisation of my games. Below you can see my stats before I registered here: 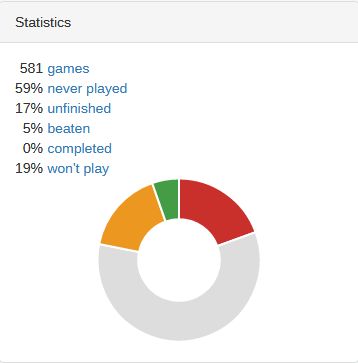 What annoys me most about those statistics is the high amount of games that I’m fairly certain I won’t play. However, if I consider why I own these games but don’t want to play them I feel a bit better.
Out of those 113 games about 40 are from the Dollar Mega Bundle that I mostly bought in the hopes of making a tiny win by selling the cards. Then there are plenty of games that I got from bundles before I knew of Steamgifts and which I thus activated just because. A handful of games I own on different platforms (e.g. Dragon Age or Dead Space). Lastly, there are a few games which I tried but just did not like at all.

I’ll try to concentrate on the big mass of games that I’m still interested in instead of being annoyed by the ones I probably won’t play. Who knows, maybe I’ll one day give those games a second chance once I’m done with the other games…?

After having bought a xbox controller for the sake of playing certain games with it I’ll probably give Darksiders a shot. I’ll also continue to play Dungeon of the Endless some more (mostly because I genuinely enjoy it and it’s great for in between because you can always easily pause and save it and it loads extremely fast). I’ll also try to collect the achievements I’m missing in 9 Clues: The Secret of Serpent Creek.

I decided to edit this post rather than create a new one to minimise spam a bit. I have decided not to hunt missing achievements but tackle games that I have not played at all. I’ll probably also postpone Darksiders because it would take more time than I am willing to commit to a single game at the moment.

Beginning my journey as BLAEO

I’ve finally decided to tackle my massive backlog and began by finding out which games I’ve actually beaten (the fact that I had to check the achievements in some cases to make sure that I actually did beat them was somewhat discomforting).

I still have to sort a lot of games, especially into the “won’t play” category, as many are remnants of a pre-Steamgifts era and thus do not interest me (or were bought for the cards, as was the case with the dollar bundle a few weeks ago).

However, I already finished my first game since registration regardless (Brothers: A Tale of Two Sons) and was even able to complete it in the sense of getting all the achievements.