It’s been a while. I’ve been lying low for a couple months; lurking. But I won this here game on SG through the BLAEO group, so it only seems proper to share my thoughts after completing it. I had this game on my wishlist because I like story driven games and it certainly looked interesting.

The game is reasonably well put together, and I did not encounter any bugs. However, it is falsely listed under adventure games on Steam. To be fair this is likely because there is no category for walking simulator, and even then it is closer to a kinetic visual novel. There are no decisions or puzzles to solve, and you don’t have to go very far between interactions so not much walking either. The entire (very short) game is moving through a prescribed progression of 3 compartments of a space station to listen to dialog, read notes and interact with objects if you are inclined. The idea is to piece together a story of what happened to the inhabitants of the station. And then you leave and all is well. No bad endings here.

It is hard to categorize whether I consider Tacoma to be a good game or a bad game. From a technical standpoint it is good. My biggest beef is that there is not enough story. It is very simplistic, predictable and unimaginative. It just felt very hollow and unsatisfying. This is what the store description says about it:

As you go about your mission, you’ll explore every detail of how the station’s crew lived and worked, finding the clues that add up to a gripping story of trust, fear, and resolve in the face of disaster.

Um.. yeah there is nothing gripping about it. Nothing compelled me to explore every detail. I only did so in order to get all achievements. In the end it was worth the price of admission, just don’t buy. ¯\_(ツ)_/¯

Not much to add. I’ve been pretty busy with work so I’m actually quite surprised I was able to finish that many. Here are the numbers:

Yes, in the grand scheme of things I lost ground in June. (And I’ve already added a few more games from summer sale to July). Looks like the backlog is bound to get worse before it gets better.

It’s been a rather slow month again, but I did manage to finish some stuff. Here’s the lowdown:

Let’s get to the numbers: 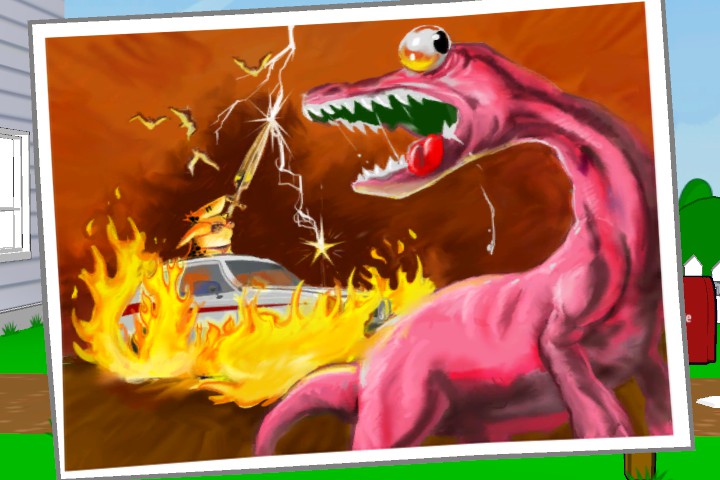 Well, I made my goal of finishing Gurumin - great game! -, playing some Ys and managed to complete Cubot finally. In addition I was able to complete A New Beginning (an SG win). But April's warmer weather helped keep me away from the computer, so I did not manage to finish the other two games that I started, and overall it was a down month for slaying the backlog.

I loved playing the Ys Chronicles. I had the Ancient Land of Ys for Apple IIGS a looong time ago but never got very far into it, so to finally complete this was awesome. Not so awesome was A New Beginning. It is okay, but by the end of the game I found myself hating every single character. It also has a good share of bugs. Strangely the interaction choices or subtitles would alternate from English to Russian, sometimes Italian or German. There were occasions where multiple languages were on screen at the same time.

The highlight of May should be beating Bayonetta (shoutout to BraveDave for that opportunity!).

Let's get to the numbers:

Do you ever get nervous that some of those old keys you are holding on to will be invalidated? On April 1st I decided to add a total 41 games, some old and some new, from my list of keys. I've drastically slowed my intake of bundles, but I still have plenty of keys left to decide what to do with. Oh well.

Overall I think I did well enough in March. But cats don’t like it when you spend too much time not looking at them. It probably won’t get better what with spring bringing lot’s of outside things to do. We shall see.

I counted CAT Interstellar as beaten even though it is in early access, because I’ve done all I could and there is no telling when it might be finished. I’ll definitely have another go at it if it does get finished. It is a quite a nice little adventure so far with great visuals.

If you like Tell Tale games, I recommend The Descendant. It doesn’t have quite the polish, but it is very similar and has a pretty good story.

I should have played Far Cry 3 - Blood Dragon much sooner. It is even better than I thought it could be. It’s too bad it doesn’t have Steam achievements. But other than that I don’t think I’d a single bad thing to say about it. (Well I might mention it was too short)

I expect to complete Gurumin fairly soon and expect to make progress in April on the other March titles that aren’t finished. Also I expect to make a dent in the Ys series, because I need more weebness in my gaming.

Not a bad month. I'm making progress on SG wins, but I'm still adding too many games to the collection.

My favorite this month has to be Deadpool. I laughed so hard :D. I highly recommend it even though the game play itself is not stellar.

I tried to play Dark Shadows Army of Evil. Wow, that was a mistake. It is so poorly put together that it is nearly unplayable. If you happen to have this game don't even think about trying it. I gave up after about 40 minutes of nauseating play. I also had to abandon Pushcat - it wasn't a terrible game. The early levels are relaxing, but then it gets a little frustrating and I wasn't enjoying it anymore.

I have new hope!

This is my first post to show my progress and I think I did pretty well. I managed to play 20 games in January, twelve of which were SG wins:

“The Room” was a really cool puzzle game and I’ve added “The Room Two” to my wishlist. Also very good are “Kathy Rain” and “Fran Bow”. “Lifeless Planet” was surprisingly good, but a little rough in spots; it turned out to be more of a jumping simulator than a walking simulator.

“DeadCore” looks good and is pretty well polished, but is way too hard for someone like me that likes his puzzles to be a bit more casual. Maybe I will beat it sometime in the future, but for now I must accept that I don’t have the precision timing or patience to get good. On the other hand I finally finished “F.E.A.R.” after dropping it a couple times. Turns out that it is still a pretty good FPS for an older title.

Let’s see… Don’t bother with “Caffeine” it is terrible in its current state. If the developer ever finishes the rest of the chapters and optimizes the graphics it might be worth a second look. That seems unlikely though. “Refunct” and “It’s Spring Again” are great achievement hunter games ;). “Gomo” is a short and cute adventure with simple puzzles. “Grotesque Tactics” was okay-ish, but the camera was really shoddy and the jokes were barely worth a smirk.

The bad part of January is that I’ve added 28 games, including 5 SG wins, to my library. :(

I’ve set up a list with about 30 games that are good candidates to play next and each time I finish one I look for another to take its place in the list. My hope is that I can play 20 to 30 titles a month. The challenge is not be brain locked on what to play next since I have so many I want to play now. Shorter / easier titles help fill in the gaps when I don’t feel a strong urge to play or am too busy.