As stated before:
I’m happy to paint for each and everyone of you. Only fee are the material and shipping costs \o/
If you wanna give me something extra, that’s totally up to you and not expected ;)

Smiley that had to be rescued!

MASTER LIST OF ALL ABC PLAN’s
The ABC Screenshot challenge!

November Progress:
7/8
PPU monthly:
done
November Additions:
16 (I should not have gotten all the Free to Play games…) 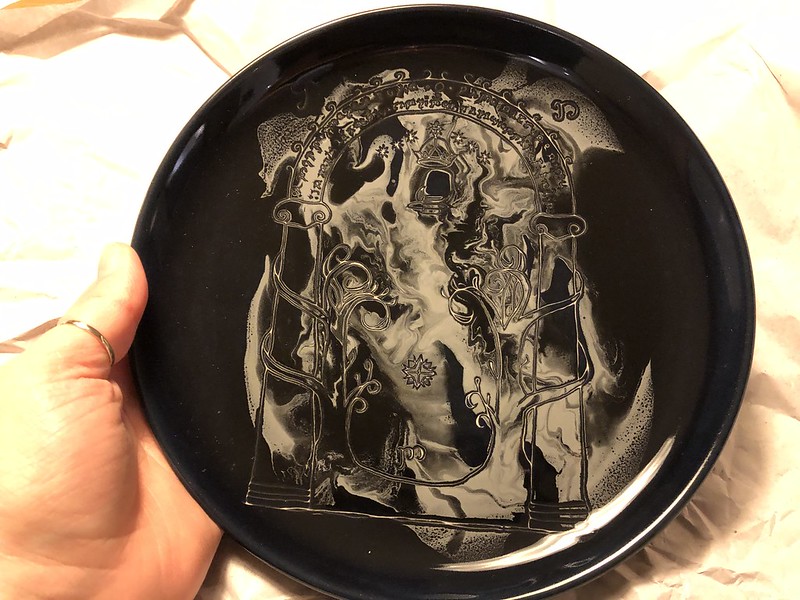 Completed Games:
The Council
Missed messages.
Marie’s Room
Among Ripples – how can I even count this?!??!?!
Cateau

The Council is a Detective game - I very much like Detective games. Even if they sometimes make me feel a bit stupid. Worse though when I didn't quite figure it out only to be like: OMG, THAT WAS SO OBVIOUS WHY DIDN'T I GET IT?!? right after looking stuff up. Bc I do that. I try not to, but I do. In this case only twice, which I think was pretty good. I had worse :D
I must say it was not really a horror game for me, but it had a few… unpretty things in it. Like the pictures were sometimes very much on the boarder to "omg i don't wanna look too close!" Which I didn't. But then art wasn't always pretty so that's not really news. Still isn't. Anyways. It had quite a… well I want to say plot twist, but it wasn't that mind blowing in the end. It felt more like it crept up on me while gaming and when it finally came around I was more like "ah, now that explains everything" than the omg version.
I very much liked the game. It doesn't get the highest rating, bc it didn't have me completely hooked in the way I had to play it right through. It had a lot of thinking going on on my part, so having a headache while playing it sucks a lot.
But I need more games like this! (O.O)
Hidden Lewd rating: Uhm, kinda lewd, but she wasn't really naked and kissing was the most that happened - sadly. Also bad kissing, they didn't even manage to make it really fitting. Like how hard can it be to program to face getting that close together and just smooch?
Gay-Ship: Sadly I didn't encounter one D:
Recommendation? Yes.

Cat Story ahead!
Ok, I have a little one: Tizio as a putting new sheets on my bed-helper. Well not really? After I just brushed him, he jumped on my bed and sat down on the blanket so I could maybe play with him. Instead I started pulling the blanket off the bed. With the cat on it. Which he didn’t like. And therefore decided to relocate onto my bed – without blanket! Next step. Ameno helped with removing the sheets of the mattress, which by now he is kinda a pro in. But the real challenge started once I wanted to put the sheets on my blanket and Tizio decided to heroically jump on it, while I shoved my hands in it to grab the blanket and… somehow we got into each others way. So he had to jump off again instead of catching the sheets. Which is such a shame, he is so good with that!

Resume of last month:
Ok, I give up! Making monthly plans just doesn’t work out for me! I somehow don’t seem to play what I intend to play. Plus I stuff my months currently with shorter games. I also tried to get back to Sims 4 AND got Cluedo, which I just love in rl and might spent way too many hours in. So yeah, I’m screwed. But on the plus side I currently have a completionrate of 53% and I think that’s pretty good. At least playing short games helps out with this laughs
The best thing though: Only two more months with my “play 8 games per month” thing! And I’ll be done with that. And not repeat it for another year. Or at least not with that many games. I decided to take it slower next year and give bigger games a bigger chance! I’m honestly looking forward to that! Hopefully I don’t get lost in endless games though O.O

Oh no! I forgot the review! Anybody want it? Otherwise I’ll just leave it O.O

Review will come in the next update, bc I basically finished it just now xD

What the heck? Why can't I walk over a can (insert any random weird items here) on the floor but a folded chair lying around?
So yeah, the controls were really not pretty. Not sure if this is due to playing with controller or if this just is a thing, but there we are. A lot of weird turning around. Like leaving the room and instantly re-entering, bc I failed. That was not nice. Also pressing B to quickly to get out of a thing - bc I played the game 2 1/2 times and at some point knew I'd just go back out and not really look around - might lead to being stuck and having to restart from the last savepoint. Which is very stupid. So no hurrying with that I guess.
Onto the story itself. I very much liked it. I really got into the apocalyptic stuff and trying to survive it. In the end things are - as usual - totally different than expected. Ok maybe not TOTALLY, but a lot :D Only minor cases of - huh, how does this fit together? For example when we do something with Mia and Silas is doing his thing. It just doesn't really fit together with his point of view later on. At least it seemed that way to me. Also and this is the biggest thing bugging me about the WHOLE GAME! What happens to Silas? I really have no idea. For all the other characters you get a last glimpse of what happens, but he just… nope, nothing, nada! He might just be lying in some corner and quietly dying, but that would be too easy, right?
For some reason I thought the HQ dude with the Scottish accent was David Tennant, but… he wasn't. Which kinda disappointed and at the same time irritated me. Bc why did I think it was him? I blame Broadchurch. Weird, weird.
Anyway, I liked it. Although this one achievement was a bit of a hassle. You have to interact with everything in a certain situation in Chapter 5. And two times it just didn't work. The third time I really interacted with everything on the way up and also the way down. The Second item on the way down unlocked it in the end. So wow. But I got it, so who cares :D
No LEWD-rating nor gay ship included
Recommendation? Yes

Deiland - or the long waiting game
Honestly! It's a crap ton of waiting! Waiting for your crops to grow, for your trees to grow, for ppl to come by, for the RIGHT ppl to come by, for having enough money, for having MORE money. For finding bugs, that screw you for a millisecond, bc then you go right back to waiting some more. Oh, and worst of all: Waiting for the right monster to finally come! Which they somehow refuses to do - yes, I'm talking of you, stupid crab monsters! >.<
Encountered two bugs: Never ever go with Mûn, when somebody else was with her on the planet.
Also never ever try to make money by selling your 4 sheep to Umi bc they give 525 and then by 5 sheep for 500. In the end I had hardly no money AND no sheep. The heck???
And always buy stuff Like yes get the stupid diamond, if you can afford it, from Goliath, and really, buy uhm… yeah… stuff which you have to get from monsters and hardly do or can only get from merchants anyway, bc that way you don't HAVE TO WAIT EVEN MORE UNTIL THEY COME BY SO YOU CAN GIVE THE STUPID CRAP TO OTHER PPL! Really, we are supposed to be special, not the stupid postman/cook/errant boy! D:
No LEWD-rating nor gay ship included (unless you count the pink alien obv in heat…)
Recommendation? It looks cute, it could be nice. But no, I don't recommend it. Too. much. waiting.

Resume of last month:
Sooooo how did last month work out? I’ve beaten/completed 7 of the (10) games I picked at the beginning of last month. Plus I had one extra picked. Which leaves three. One I started. And I will probably finish it this month. One I haven’t started and am annoyed I didn’t do so. And ooooone, I should just maybe… put aside and leave it there. Maybe. Or give it another try. Ugh.
That’s that. On to next month!

Plan for the Month:
PoP games:

Brought you some ceramic pics. It’s a yarnbowl with all the zodiac star constellations on it \o/ 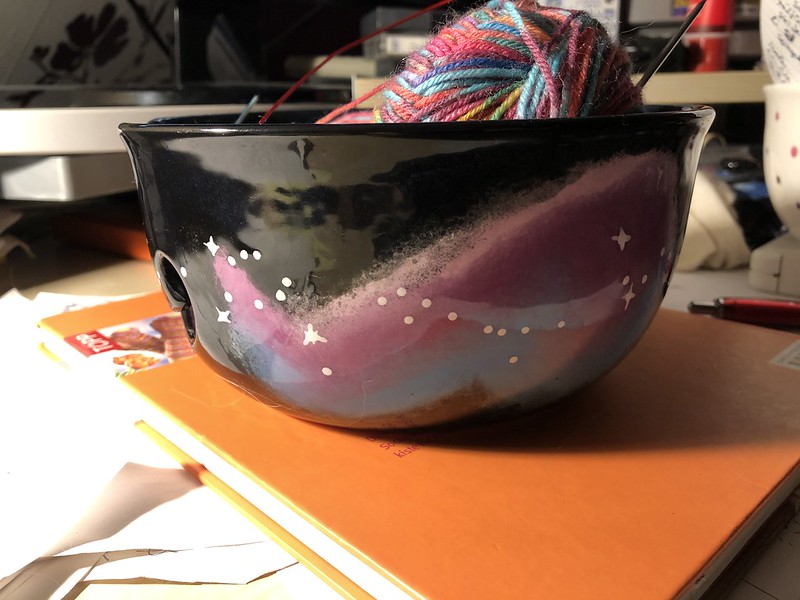 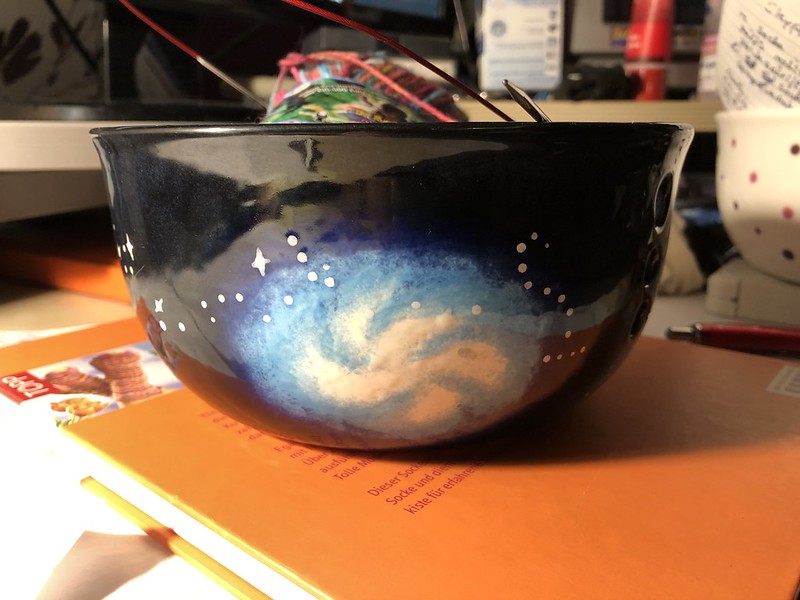 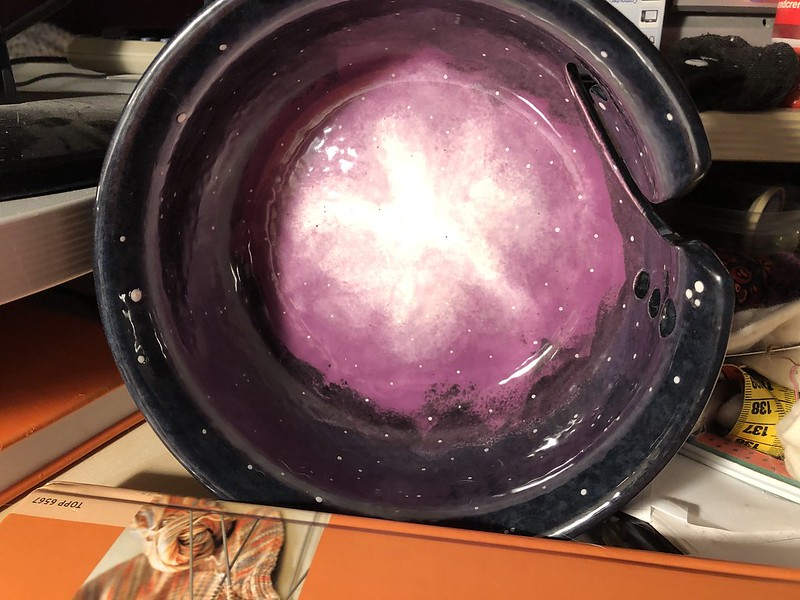 Well at least I didn't like fail, ok? I didn't need to look for videos so I can solve jumping segments. I also managed to beat ALL the fights - although yes, I did look up guides for the boss fights, bc… right… stuff doesn't always seem to make sense. Although I did kinda know what I had to do with Nessie, just it didn't work out when I tried, so I looked it up. Same with the end boss, just not slightly. So yeah. Funny. That. Me looking up shit. But I managed, ok?
Also I didn't die as much as I did last time - and rly the jumping was not THAT horrible! It's still super stupid to handle, still super clunky and the camera still sucks! I'm not sure if I needed it with the last time, but I had to use my wristbands against motion sickness. That sucked. I blame the camera.
And wth is wrong with Laras posture? So we have this one scene were she is (supposedly) sexy in a black dress and… nobody walks like that or holds themselves like that. Or fights badass in such a thing with boobies her size and NOT HAVE A BRA ON! Never mind. She had suspender. Hurray!
Story wise it was… interesting enough? Although pretty sad what happened to her friend. And her mum. But I liked the story. How old legends seem to connect. I do wonder why Lara never tried to reach that place though in her other games. I guess she doesn't? Unsure. Will see in the next games thinking
OMG! This game gave me such a fright! I was distracted for a sec and suddenly some enemy jumped me and I might or might not have yelped and Tizio woke up totally startled and ready to bolt, until he realized nothing was going on and we could just keep going D:
No LEWD-rating nor gay ship included - no? no.
Recommendation? Uhm… For the sake of having placed Tomb Raider, yes do it. Otherwise… I think I wouldn't really miss it? :D