Really want to get through my backlog of games I’ve spent so much money on. I don’t have a ton of free time due to work, so I tried to be realistic with games I wouldn’t play. Bullet hell, difficult platformers, and FPS are some of my least favorite genres, so unless it seems like an amazing/unique game, I probably will not play it in the near future. 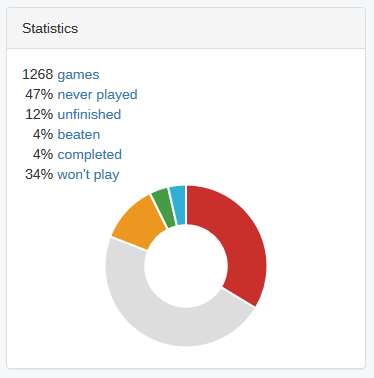 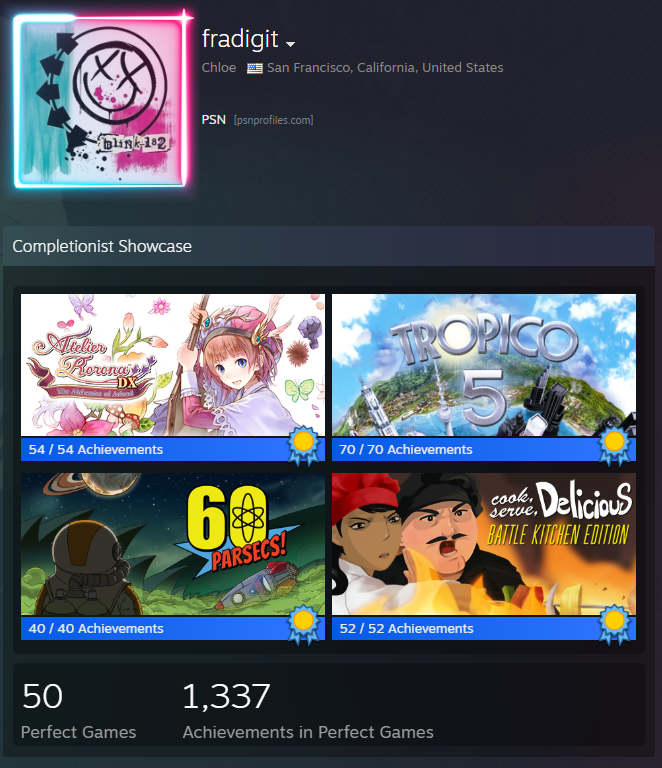 I had a pretty productive May in terms of clearing my backlog - although I didn’t actually play any of the themed games I picked (I played Watch Dogs 2 for about 15 minutes). I also picked up a couple games from the Golden Week sale. I beat Her Story, Do Not Feed the Monkeys, Samsara Room, Not For Broadcast (the part that’s released so far), The Haunted Island, Atelier Totori, and There Is No Game. I also started Golf Peaks, Steins;Gate: My Darling’s Embrace, and Tametsi. I also spent the long weekend playing Tales of Symphonia, but it takes like 4-5 playthroughs to 100% that (the playthroughs are probably 60+ hours each) so not really a ton of progress there; I did about a third of the second playthrough.

This month I’ll be attempting to 100% Totori (there’s a big boat you build so theme appropriate!) and maybe YMBAB. I’ll try and finish Steins;Gate dating simulator. After that, probably start on Atelier Meruru or maybe play something on the Switch.

I am back after skipping April to binge on Animal Crossing. And what a theme - I live in Seattle currently and San Francisco before that so I decided to look for games developed or set on the west coast of the USA. In fact, I will probably be playing Guild Wars (developed by ArenaNet in Washington) since it got new content for the 15 year anniversary, but it is not in my Steam library so I didn’t include it in the list. My brain is kinda fried from work, quarantine, and new dog, so I don’t know if I’ll get to the games listed. Plus, I just bought some games from the Golden Week sale and will probably be prioritizing them. Also Animal Crossing is still a thing.

To be honest, I’m not too happy with my list since I was looking for simpler games like puzzle or rhythm games, but I don’t know which are developed on the west coast. Maybe Crypt of the NecroDancer (looks like Vancouver so almost close enough)? Maybe something by Double Fine (around San Francisco)? Or a bigger company? I don’t think I would count Nintendo since the games are not developed here, but Pokemon Go would count (not on Steam though). Anyone have better suggestions? Something set in Seattle so I can virtually explore? I saw someone playing Watch_Dogs 2 and thought its depiction of San Francisco was pretty good! I looked at Wikipedia, which had Killer7 but I haven’t actually bought that game yet, and Deus Ex: Invisible War, but I haven’t played the first one yet and the reviews are bad. First world problems I guess :)

I made no progress last month and expect to make no progress this month, unfortunately. Got back into Pokemon when Pokemon Home came out, and Animal Crossing is just around the corner! I guess if I do find some time I’ll try and play Tacoma. I did actually play a walking game last month, The Gardens Between. The mechanics were interesting, and I think I missed most of the secret achievements so there is some motivation to go and 100% it.

Stay healthy and don’t forget to wash your hands!! :)

February 2020 theme Out of This World:

Terrible progress in January, was not motivated to play anything. I haven’t even been keeping up with Pokemon Go, didn’t get any Lunar New Year new Pokemon or anything. I did open up Detention with the intent to finish it before the end of the month and it ended up having some action sequences which I wasn’t expecting (not anything really difficult but scared me when I was trying to get ready for bed). I knew it was a horror game but didn’t think it had enemies. I really liked it though, not sure why I liked it so much more than The Cat Lady which had similar sort of genres. Also, was the theme for February picked with FTL in mind? The fact that it JUST came out with achievements seems like too much of a coincidence. Besides the above, I’ve been playing some Slay the Spire and Hanafuda on my phone at work via Steam Link (it works decently).

Once again, not much progress. I did manage to beat one game. Unheard was OK but I wish they had more of a budget for voice actors, that kinda killed it for me. January is the last month work should be super busy, so once again not expecting more than 1 game this month. I’ve been setting up all the consoles and everything in the living room with an HDMI switch and once a few more HDMI cables arrive, I should be able to plug everything in and not have to physically move wires anymore. That should make the Steam Link more appealing to use when I do have time. Outside of Steam, I’ve been playing Persona 5 and Ring Fit Adventure.

Not much progress in November, as expected. Did manage to finish Backbone: Prologue… Probably wouldn’t get the full game unless I didn’t have a massive backlog. The first half of the month I was busy playing Ring Fit Adventure on the Switch everyday, and the second half was entirely devoted to Pokemon Sword, which I completed the Pokedex on. I don’t have too many games released in 2019 that I haven’t beaten already but I did just pick up Unheard so that and two free VNs are my goal for this month. I’ll try and finish one but honestly I will be pretty busy with work and Ring Fit Adventure still so I’m not expecting to start all of them.

Did not really make any progress on the backlog in October. Work picked up, some bad allergies developed, and I got Ring Fit Adventure for the Switch, which I’ve been attempting to play every night. Most of the weekends have been busy doing chores or playing Pokemon Go. I did start The Cat Lady, but really didn’t like it very much. I haven’t dropped it entirely, but doubt I will be playing anytime soon. Not expecting a ton of progress in November either to be honest. Still need to exercise every night, Pokemon SwSh is out in a few weeks, and work is only getting busier. I probably won’t be making any major progress on the Steam backlog until maybe late January or February when work slows down.

I didn’t end up playing any of the DLC I picked for September. I did beat 428 Shibuya Scramble and Cook Serve Delicious. For October, I’m also planning to get that new fitness game on the Switch when it comes out later this month, so some of my time will be playing that. I might buy Atelier Ryza when it comes out as well.

September 2019 theme Deal with the DLC:

I DID IT! I beat all 3 games for August! So happy. Settled into my new routine and just have more time and less stress. I was hoping I’d be able to play more during my commute too, but the actual bus/shuttle ride is only about 25 minutes so it’s not quite long enough to really get into anything (I was trying to play Legend of Dragoon on the Vita but I only get through like 5 battles so it isn’t satisfying, maybe I’ll just read).

For September’s theme, I tried to pick DLC that had self contained stories. Technically Cthulhu is just a bonus story, not DLC, but I couldn’t think of any other DLC off the top of my head.