The Other Backlog: Trapt

Playing Resident Evil 3 the other day reminded me of that ever-growing backlog I have been neglecting for so long; the console games backlog! (AKA those games I’d really love to play but never got ported to PC). As a fan of the Deception series I just had to play Trapt, the fourth installment of the series (the previous 3 were released on PSX). 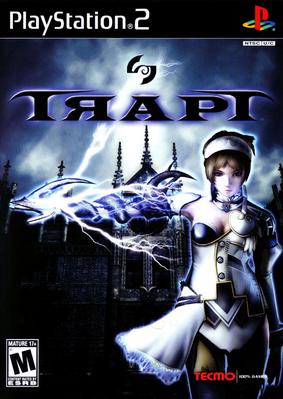 The game follows Allura (Alicia in the JP version), a princess who was framed for the murder of her father by her totally not evil stepmother and escapes from the castle with the help of her handmaid. She then takes refuge in an abandoned castle, but is forced to make a deal with a fiend. She then gets the power to magically set traps to fend off her pursuers in exchange of the souls of the people she kills. The plot is nothing to write home about and it can get a tad confusing at times, though I have to say there were a few plot twists that caught me by surprise. The game has multiple endings based on some choices near the end of the game, and they are all pretty messed up. In the good ending you manage to defeat the Fiend, save the world from its doom and become the new queen, but you’re pretty much the only inhabitant alive of said kingdom since you killed pretty much everyone thorough the game, and the evil ending gets you fully possessed by the fiend and you get to see the MC kill the only person powerful enough to stop the now resurrected fiend.

If I had to describe the game from a gameplay angle it’d be “Home Alone, but darker and deadlier”. There are 3 kind of traps you can use in the game. Ceiling Traps like giant boulders that fall from the ceiling, vases that do the same, guillotines, etc; wall traps like iron maidens, arrows shot from the wall, push walls, etc; and floor traps like bear traps, bombs, and the ever deadly banana peel, among others. Also some rooms have already set traps that can be used to make combos with your own traps (and the more combos you do the more money you get). There are some special traps called Dark Illusions that can be activated if you meet certain conditions which are brutal and over the top enough that they’d fit in games like Mortal Kombat (this game has no gore though, all you will see is blood).

There were a few things that bugged me a bit though. For starters they changed the main character’s name in the english translation yet they kept the japanese voices, so everytime they name the main character you’ll hear “Alicia” but read “Allura” in the subs. Also the Legionnaires are way too annoying and hard to beat. They can pretty much resist anything and you’re royally screwed if you aren’t prepared to fight them.

All in all it was a good game that can be beaten in a few hours. Gameplay-wise is the best of the first four (I’ve yet to play the PS3 ones) but I liked the plot in the third one more.

If I had to describe the game from a gameplay angle it’d be “Home Alone, but darker and deadlier”.

The genre you’re looking for is “Tower Defense.”

All in all it was a good game that can be beaten in a.

Oh crap, I didn’t realize I left that sentence unfinished. It has been corrected ^^;

The game is very different than a tower defense though. You can move your character across the different rooms in the old castle unlike in tower defense games where you have to defend an stationary building, and the idea of the game is to lure your opponents into the traps laid in it (either set by you or previously set).