I ran into some problems with this one. The last achievement popped up before hand, so now it looks like I got it before actually finishing the game, but the game’s so full of bugs I won’t even bother fixing it with SAM. This one is CONSIDERABLY harder than Rebirth, because the optimization is bad so you’ll get a lot of lag if too much is going on in the screen, among other problems. I hadn’t picked this one up for a long time because I was playing rebirth, and I have to say I don’t like it as much as I did with my first 200+ hours. It’s still good, but now that there is Rebirth there is no point in playing the original simply because Rebirth actually works. Either way I’ll still enjoy it in 50 years when I decide to replay some “retro” games of my youth.

And now I finished both isaacs! 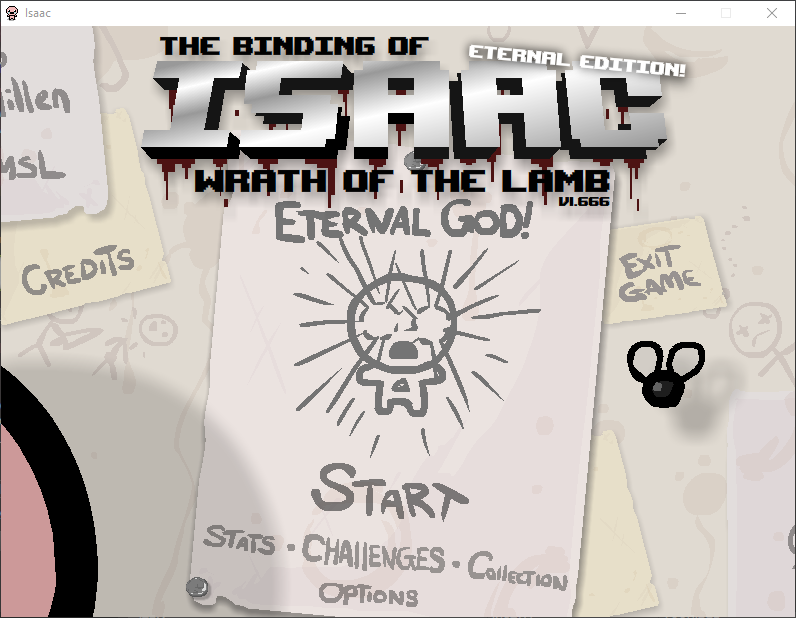 Look forward to our next broadcasting where we finally stop fucking talking about The Binding of Isaac!

Great work. I working in my last 2 achiev for 100%, no damage in depths and womb. Any advice?

Hold R until the first floor item is decent then pray. That’s what I did at least. It helps if you sacrifice two goats to the RNG gods.

Yeah, I basically got lucky in that department. Try to gather as much money in earlier floors for some shop items that give you mapping so you have a direct path to the boss. Also I should mention with the Depths one I got an XL room. The item “forget me now” resets damage done in that floor which is super useful.

Congratulations! Your comment made me wonder if Steam still exists and our subscriptions are valid after 50 years.. :)

I envy your determination :D

I tried to play Isaac base game again some time again, but got annoyed after like 30 min and uninstalled it.

Yay, eternal god! This shit made me hate this game. And beating ??? while playing as ??? on hardcore was just too much >/<

Well, I’m not gonna try it, ‘cause I’m not goona play it again :P