2016 was hardly an amazing year from an overall perspective, but I do believe that it turned out to be a pretty good year gaming wise. Various ambitious titles, both AAA and indie, have been released onto the market, but when I’ll to choose my favourite game released this year then I’m gonna go with the best carrot farming/plumber/rage quitting due to precision jumping simulator 2016, Final Fantasy XV.
This is most likely going to end up as a rather long post with various instances of fangirling and a bunch of screenshots so you have been warned. In case the pictures won’t look this amazing, then blame the in-game photo share thing and not my complete inability to not butcher screenies, please. :p 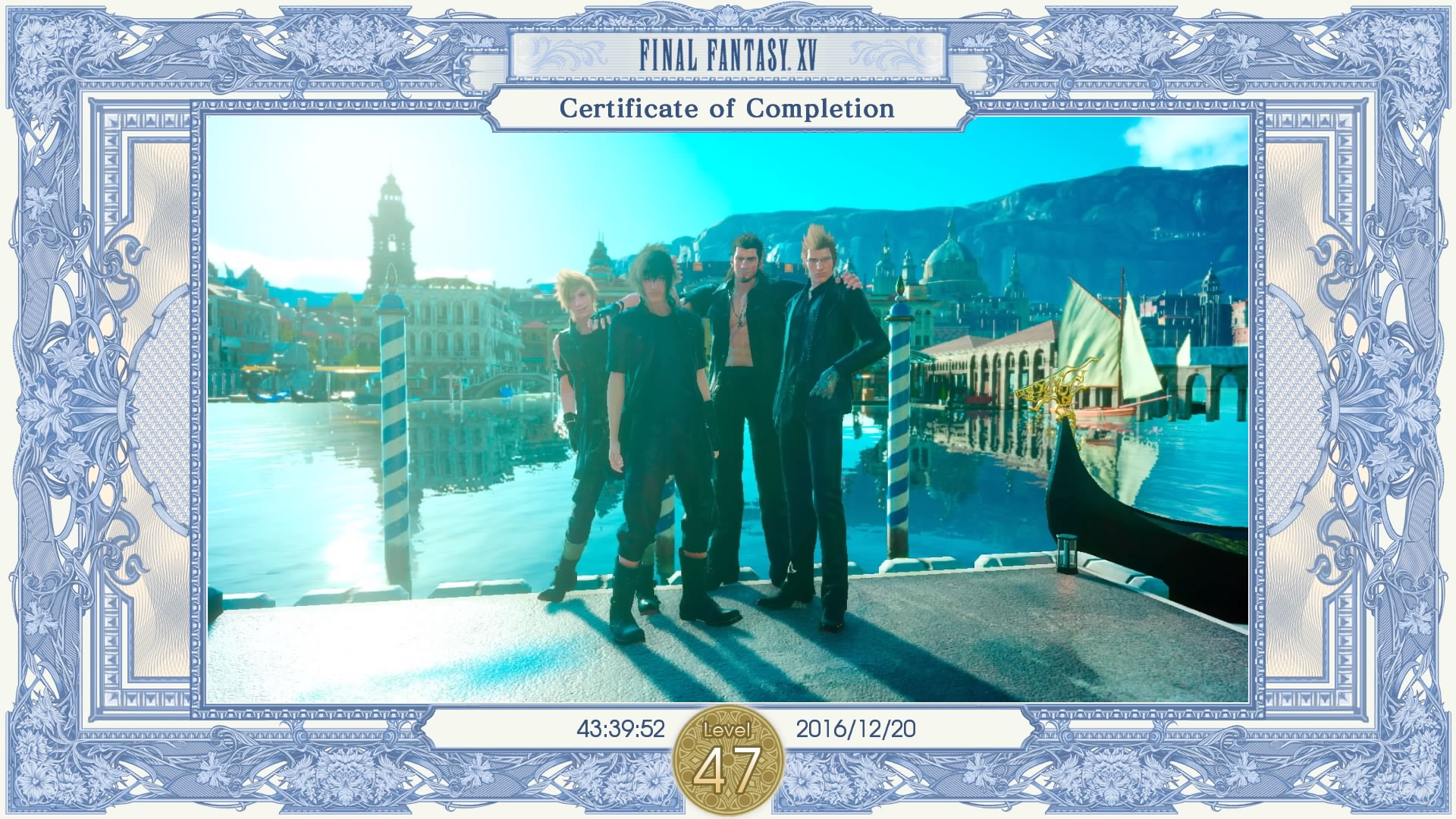 Characters
First of all, let me just say that, as is clearly visible by what I have done to my car (third pic below), I am absultely not obsessing over one of the characters Ignis at all.
Well, now that we have that out of the way, let’s go into the more substantive aspect. Both good and bad guys&gals have sadly a thing for being a bit underdeveloped from a personality standpoint, but this does in no way mean that they are not well designed characters. The entire cast is presented so as to make them as likeable without forcing it down your throat as it’s only possible, or at least in a way that you are able to understand their motives in the case of the baddies. It doesn’t sadly change the fact that the background of some characters seemed to be rather neglected and I honestly hope that their stories will be the focus of future DLCs.
Also, I played the game in Japanese with English subtitles and I thought that the voices matched the characters perfectly especially Iggy ♥ and portrayed the atmosphere and emotions of the scenes perfectly. I later watched some English VO gameplay and cringed immensely… 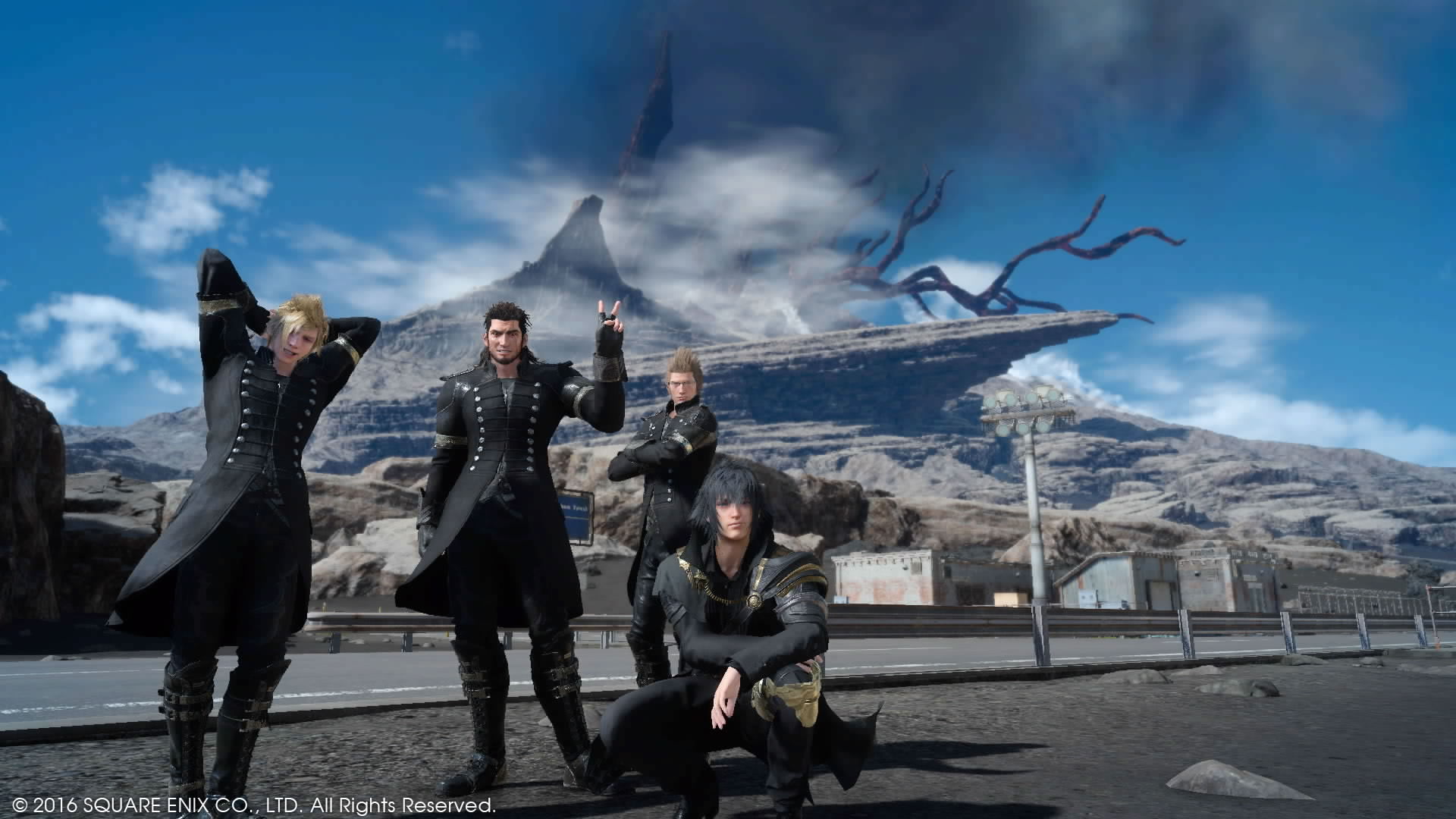 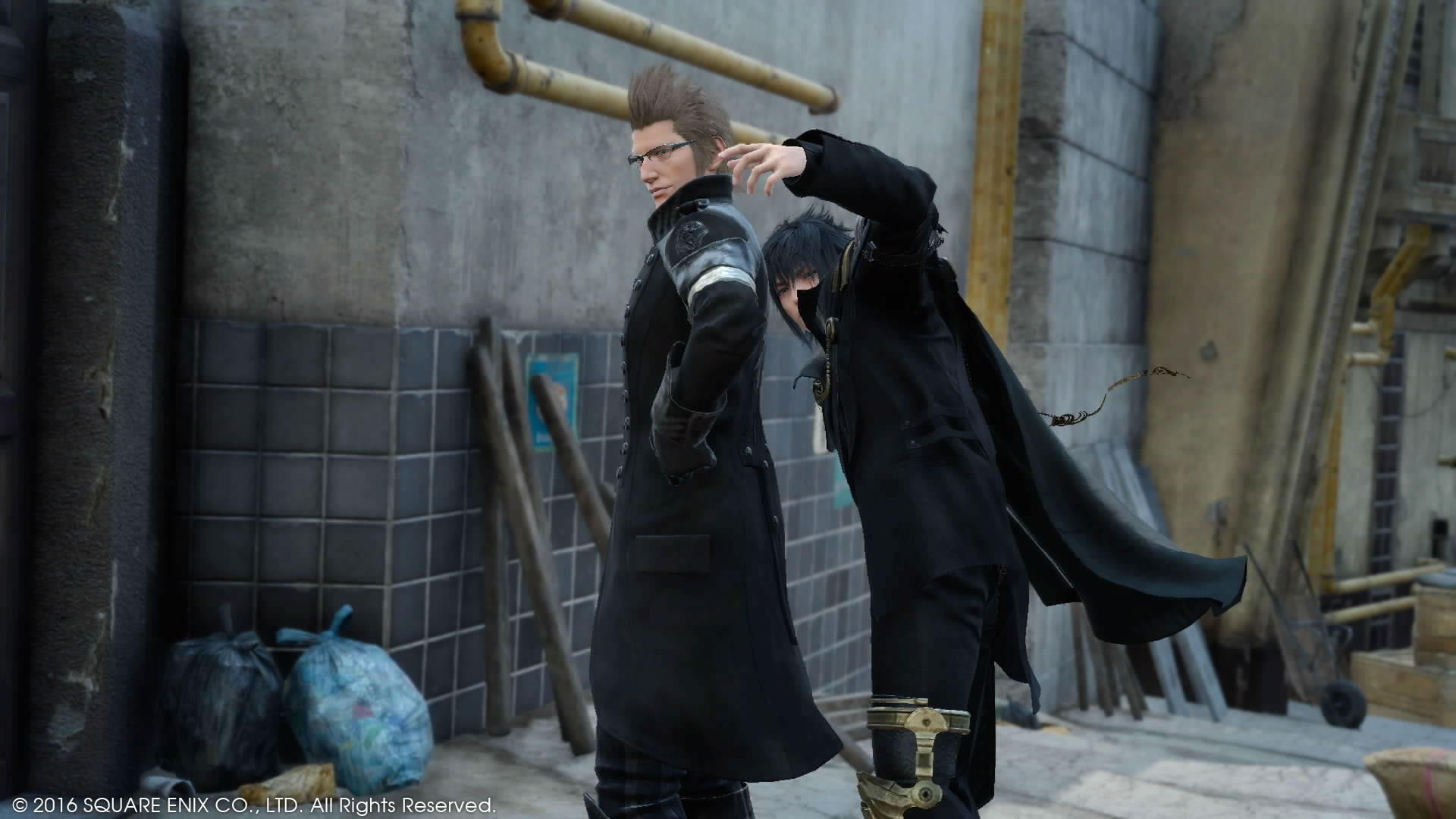 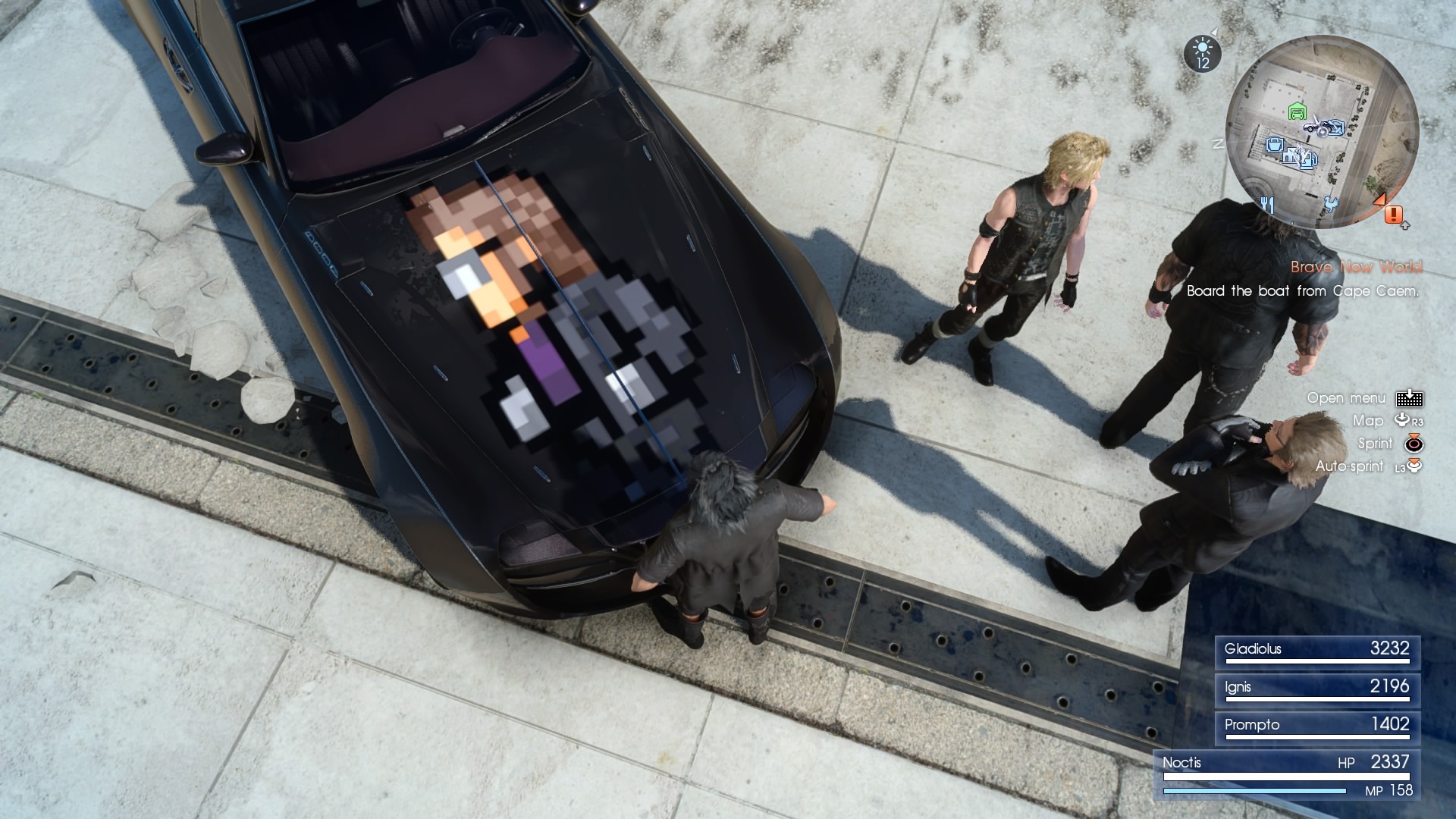 Story and main missions
So here is sadly the department where the game lacks a bit more. FFXV had some serious amounts of cut content and it shows. Plot holes are in no way something you come across at every corner, but there are visible due to the rather lack of serious indepth storytelling. Still, it certainly doesn’t water down to the rather basic “getting your throne back and fighting for your friends and loved ones” way of storytelling, it’s much more than that, but noone can deny that with the proper care it could have been even more and even better.
On the other hand, I don’t really have any issues with the way that the story was presented. Main missions were designed pretty damn well in my opinion and that’s basically it. :p
Also, let me just say that I certainly overestimated my emotional stability, since I could definitely use a few more packs of tissues then I had while playing through the ending.
It was more than I could take… 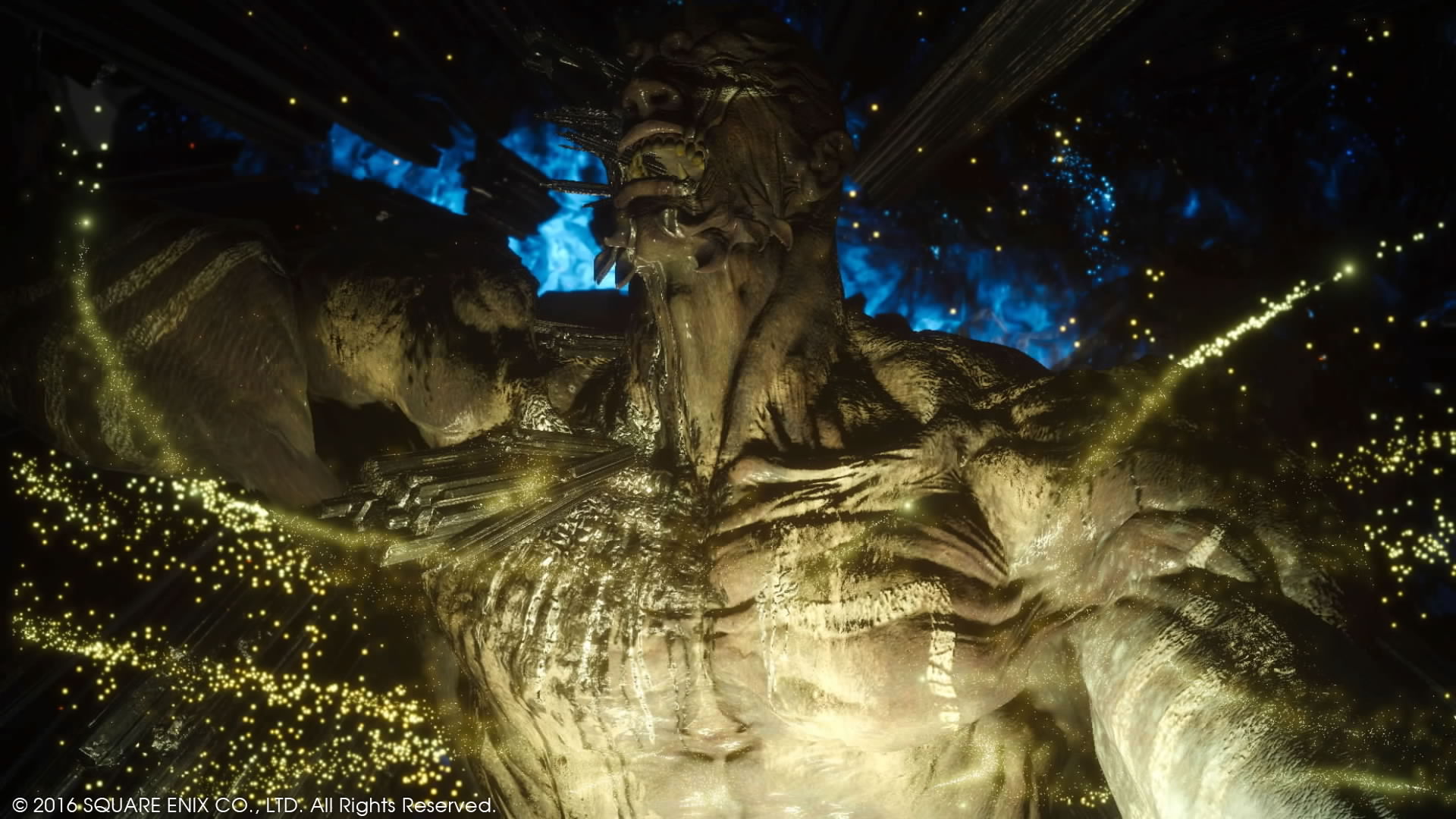 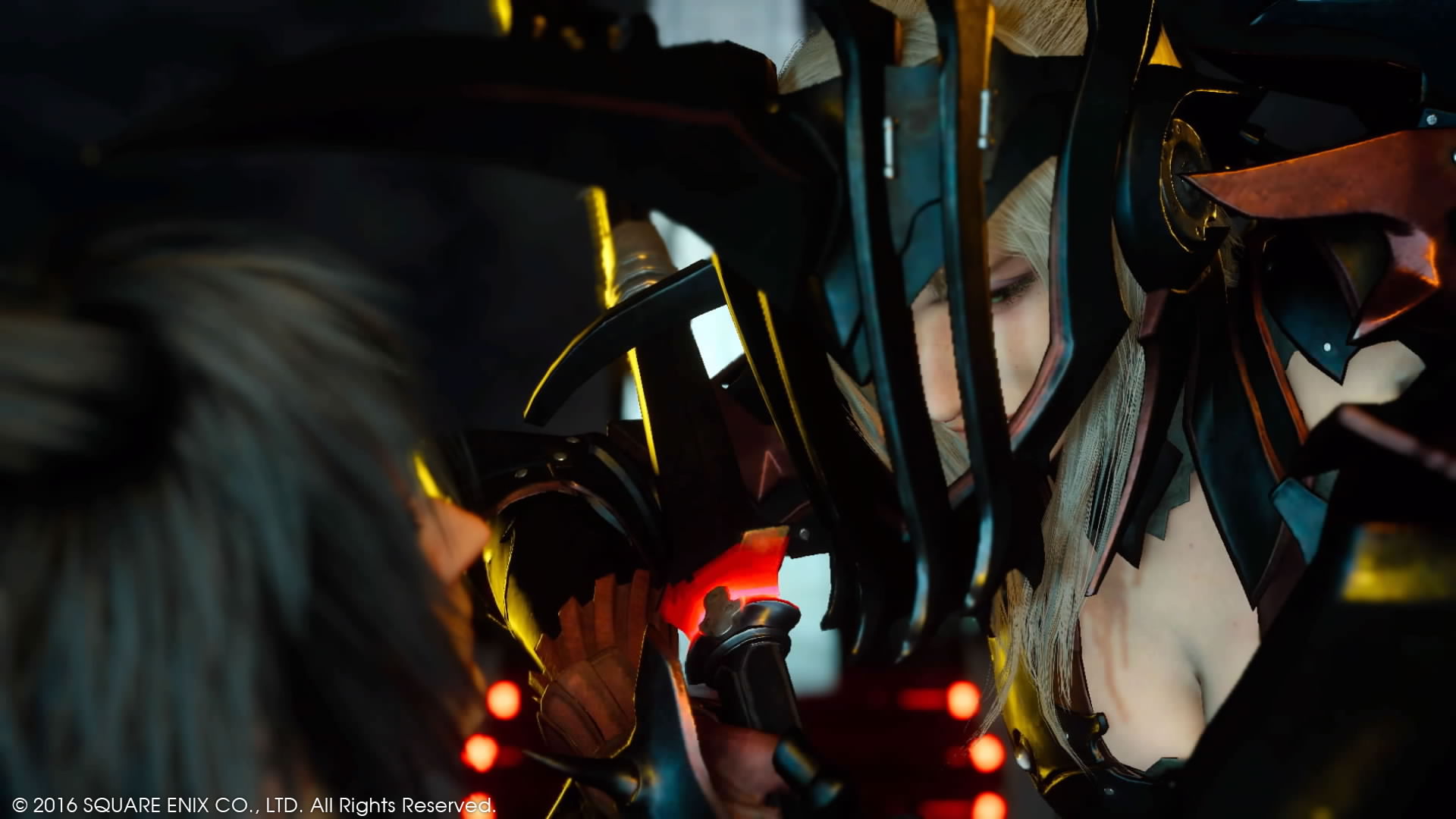 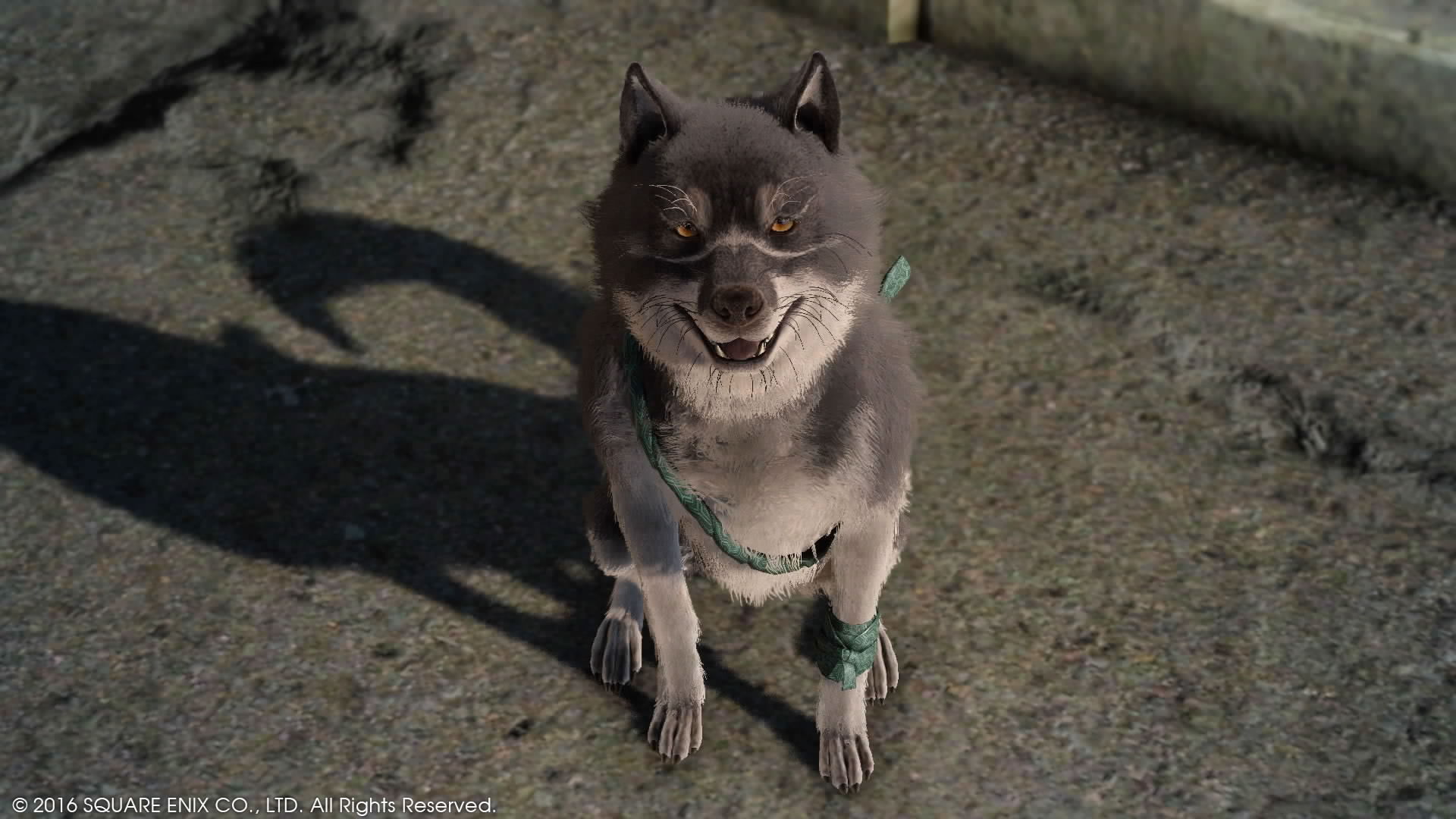 Hunts, tours and other side missions

Side stuff is divided into a few different “categories”.
First there are the most regular side mission given by various NPCs around the world. They’re hardly out the ordinary, since they mostly consist of fetch quests and/or killing X monster in Y location and they aren’t necessarily something to write home about, but they are still enjoyable, little distractions.
Secondly, there are hunts. Many hunts. 102 of them to be exact. And since I’ve done 99 of them, I think that I have the right to say something about them. :p Besides the fact that your “bounty targets” are much more dangerous than your average random mob, hunts are also highly rewarding activities as you get paid for doing them in both money and valuable recovery items and accessories. Also, I absolutely adore them and that includes the turtle superboss, which took me 2h, cause I was underleveled and simply wanted my Platinum fast. :p
Lastly, sometimes when resting in specific locations your party members may take you at the break of dawn at a “tour”. Those are short, adorable little events which are simply there in order to create some more happy moments between Noctis and the guys and because of that shouldn’t be disregarded. :) 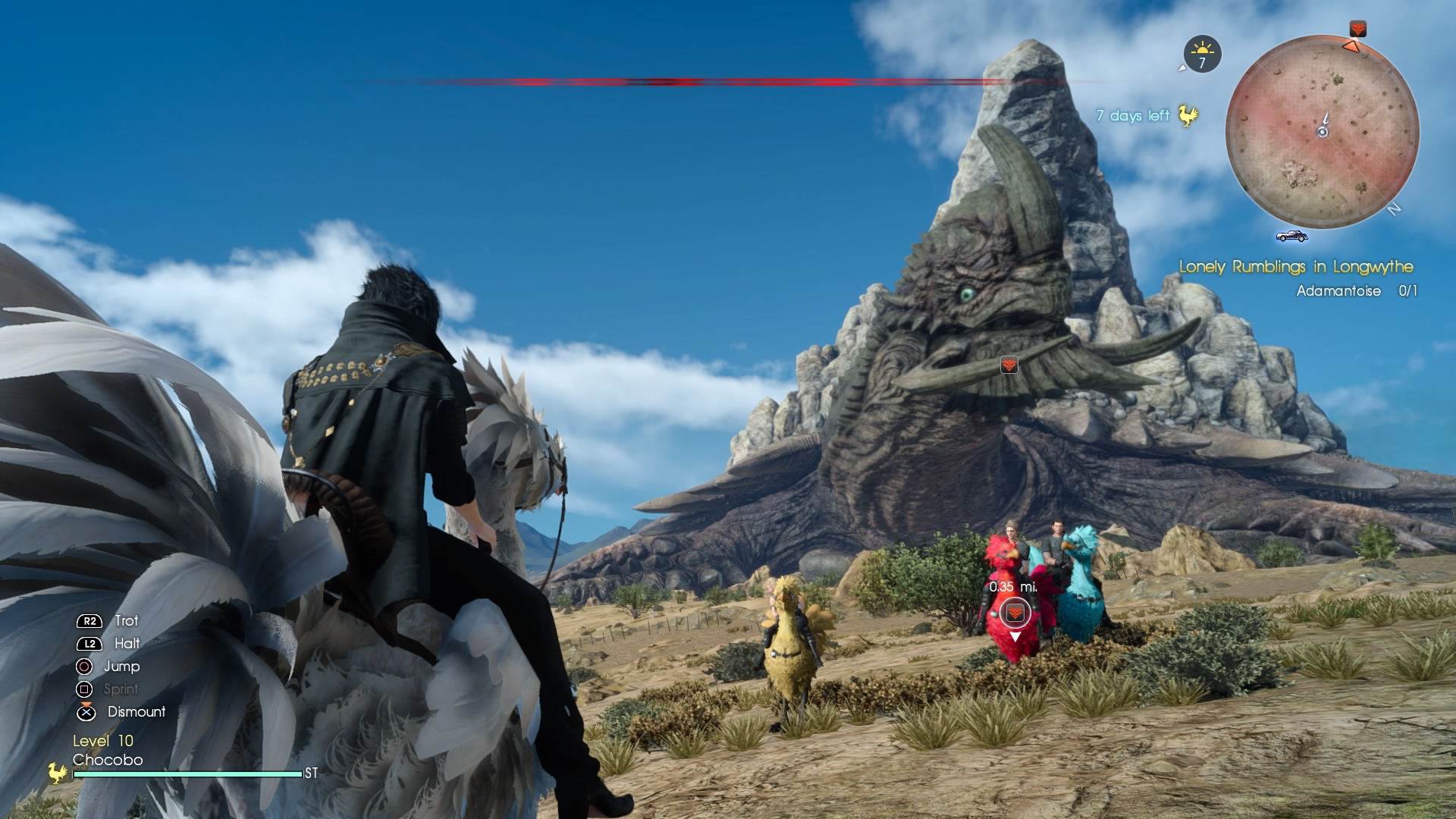 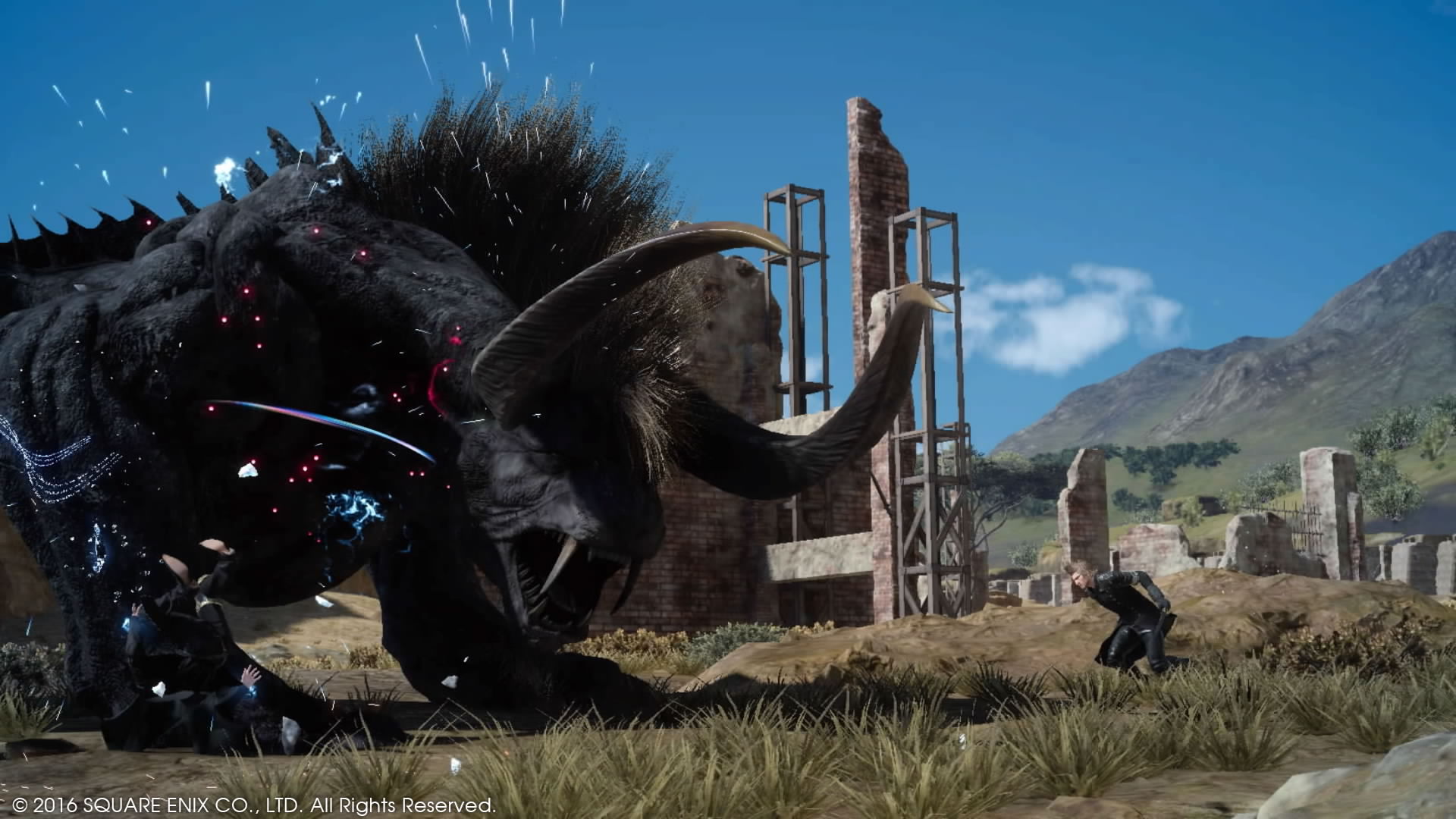 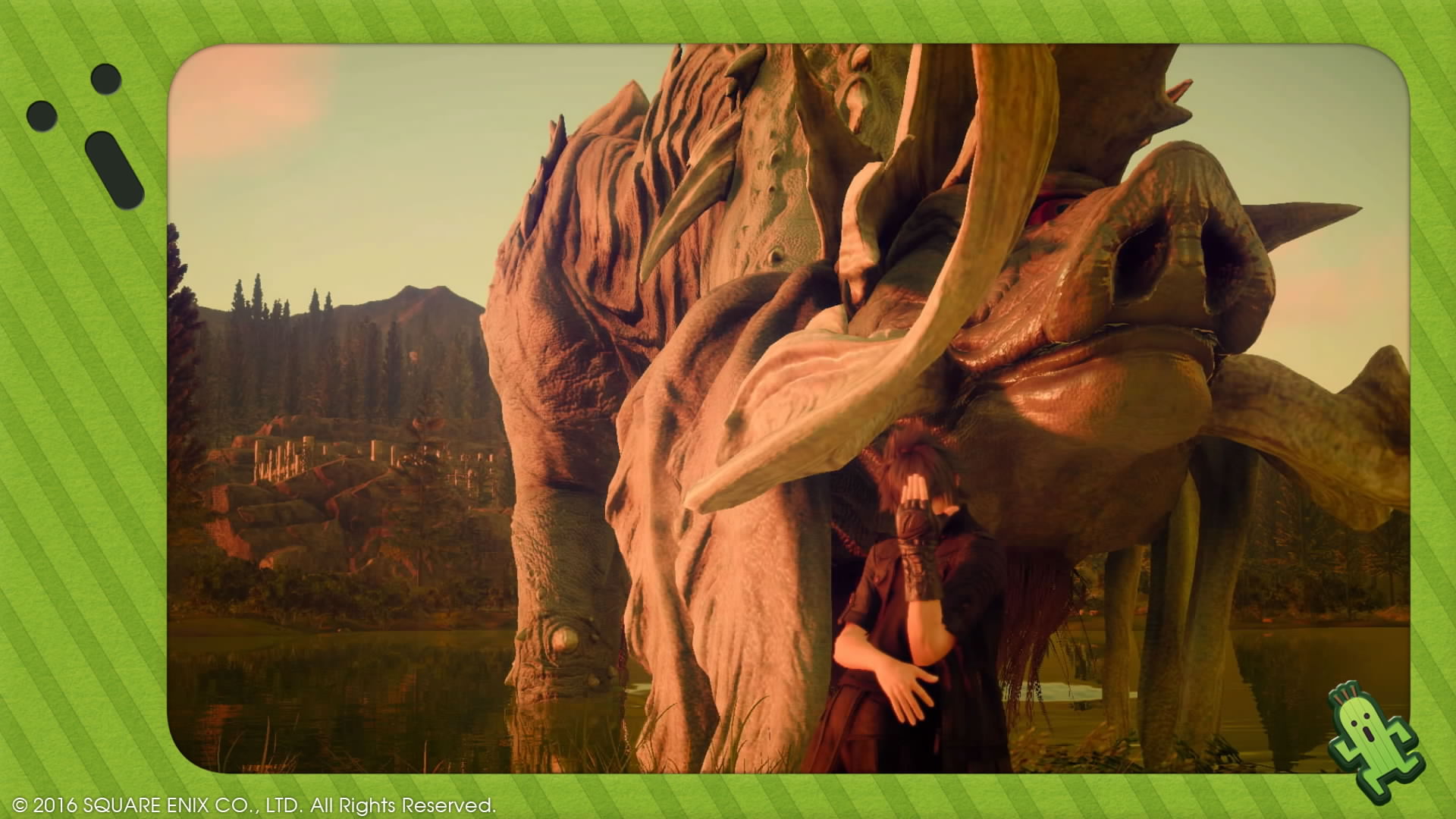 FFXV is after all a jrpg, so obviously you’‘l be fighting stuff. This entry in the series continues to utilize real time combat and does that in a really good way for the most part imo. Noctis, unlike his teammates, isn’t restricted in terms of weapon usage and has a wide variety of gear at his disposal, that should be suitable for most rpg playstyles.
Team AI is truly well done and the boys basically never derp around the battlefield in times when you need them to do stuff on their own.
Summons are a different story, as time was cut short during their development, but I tolerate them for what they are, even if it’s miles away from perfection.. 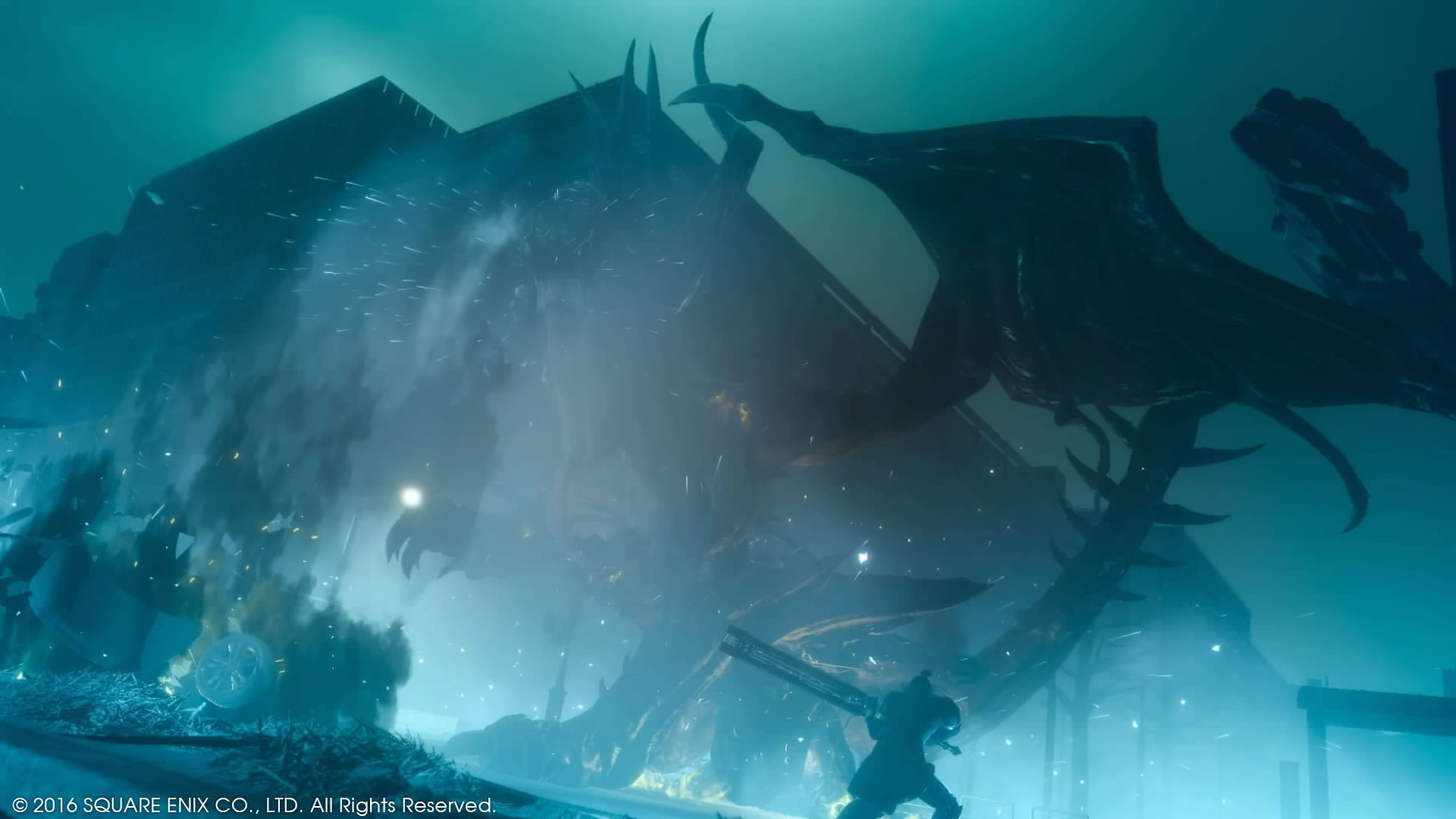 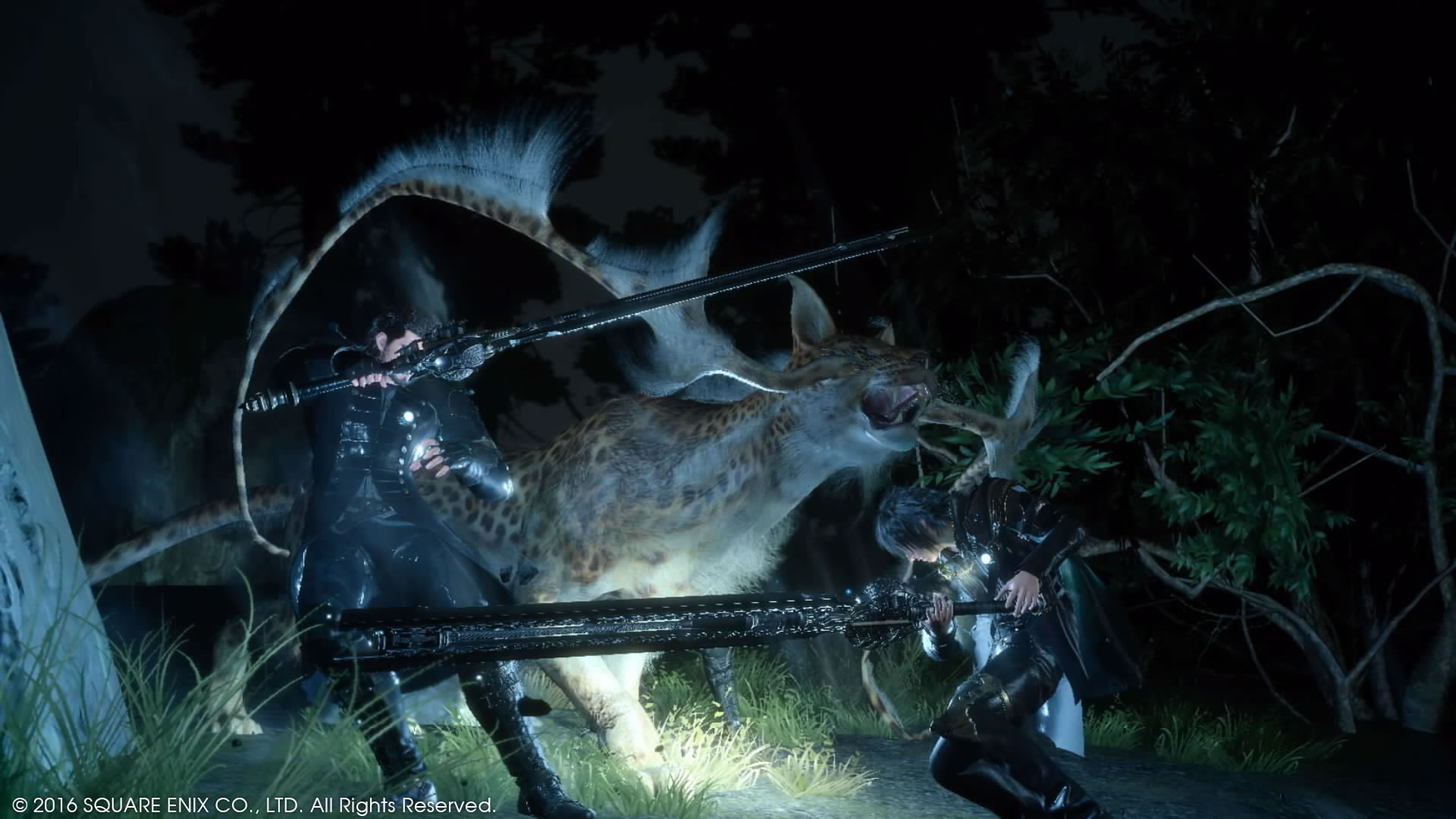 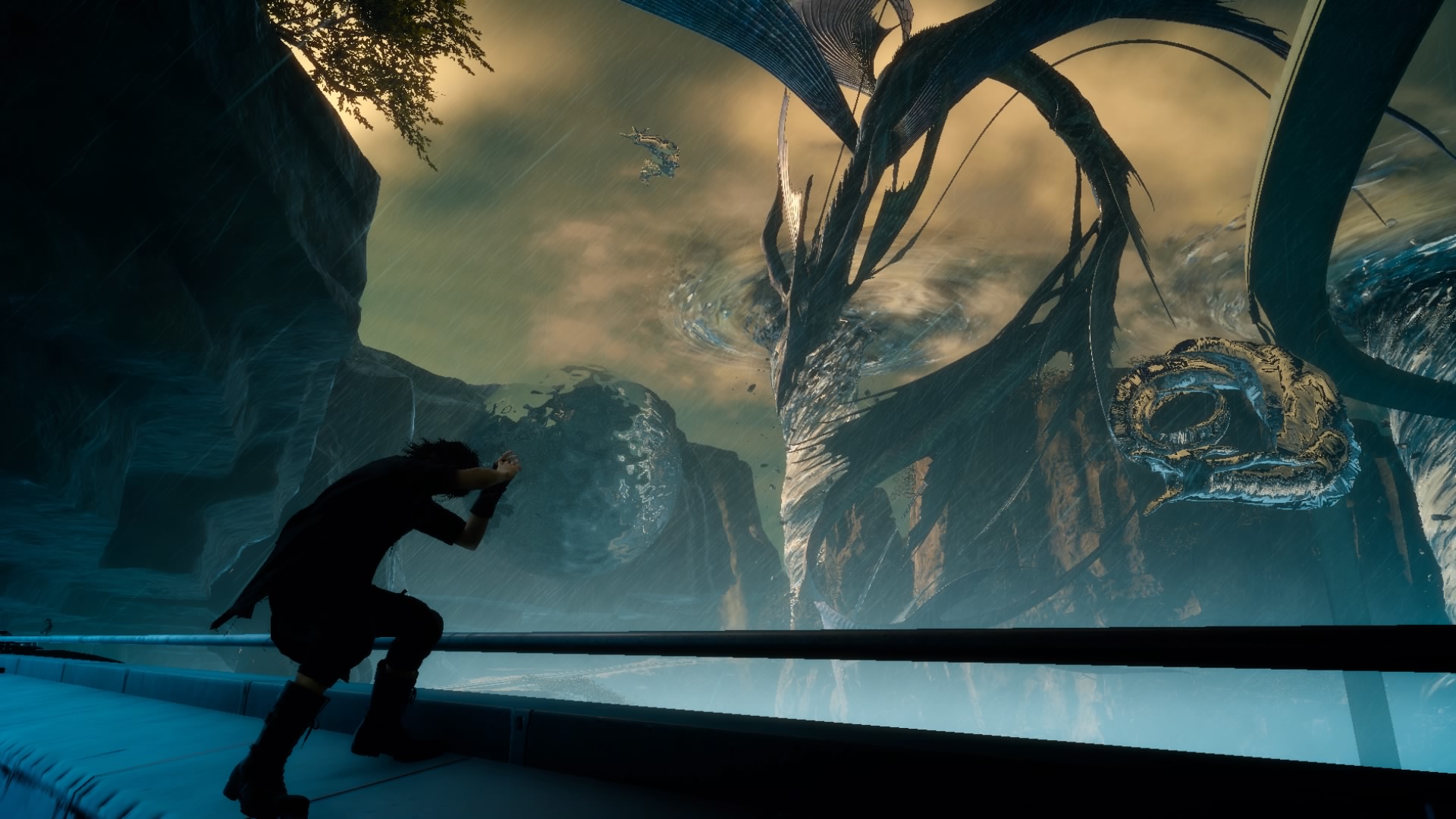 Monster designs
And now onto the stuff you’re actually fighting. I wouldn’t say that FFXV is ridiculously creative with it’s monster designs, as many of them are basically simply a bit “monsterised” versions of existing animals, like leopards, rhinos, snakes, etc, or variations of already famous creatures like griffons and dragons, but I don’t really see this as much of an issue. The inhabitants of this world fit it rather well and keeping things simple in that regard the way that FFXV can be seen as something positive. Nevertheless, I definitely had the feeling of “Wow, this creature is beautiful. I must kill it. :3” rather often. I^v^I 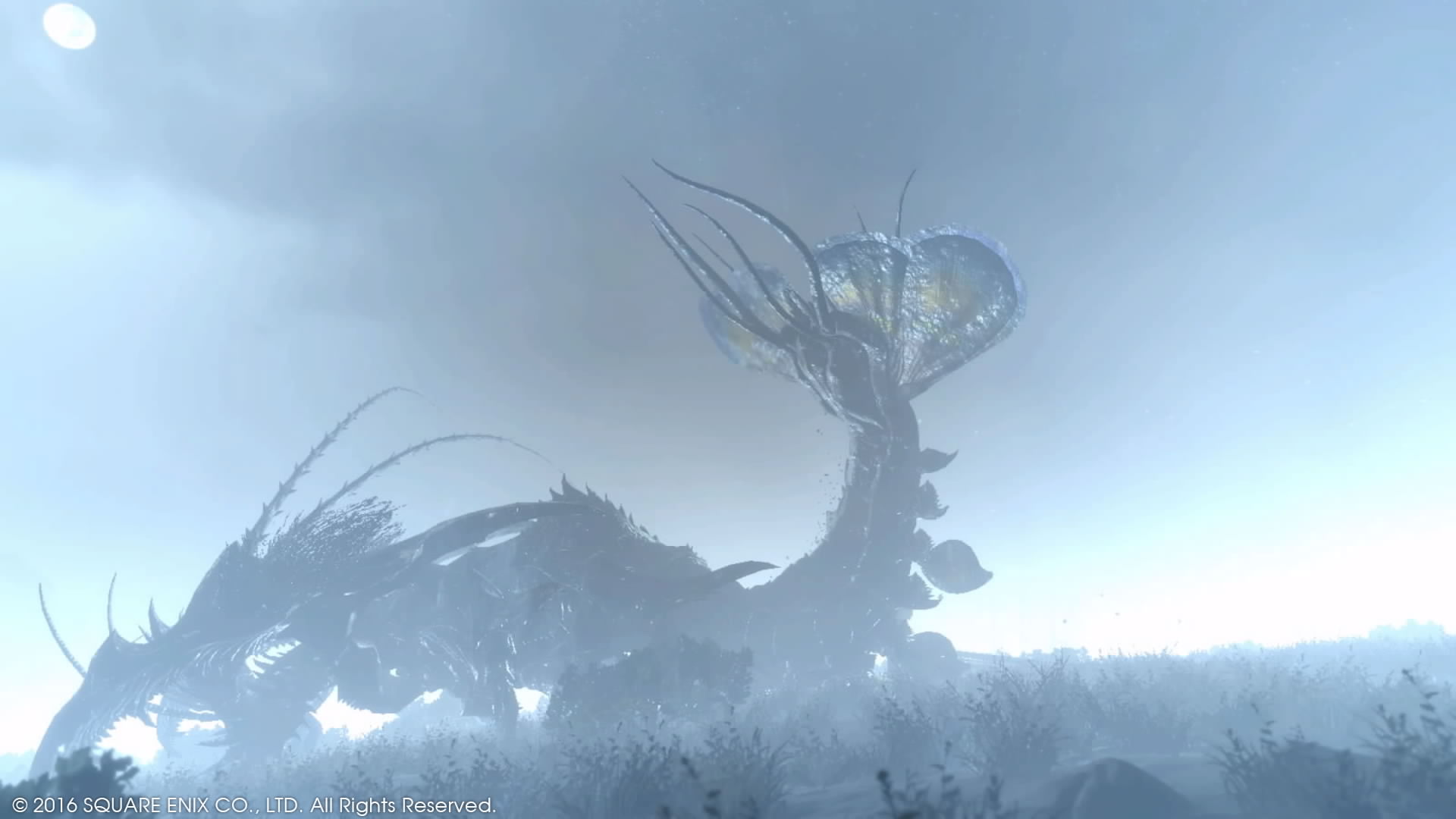 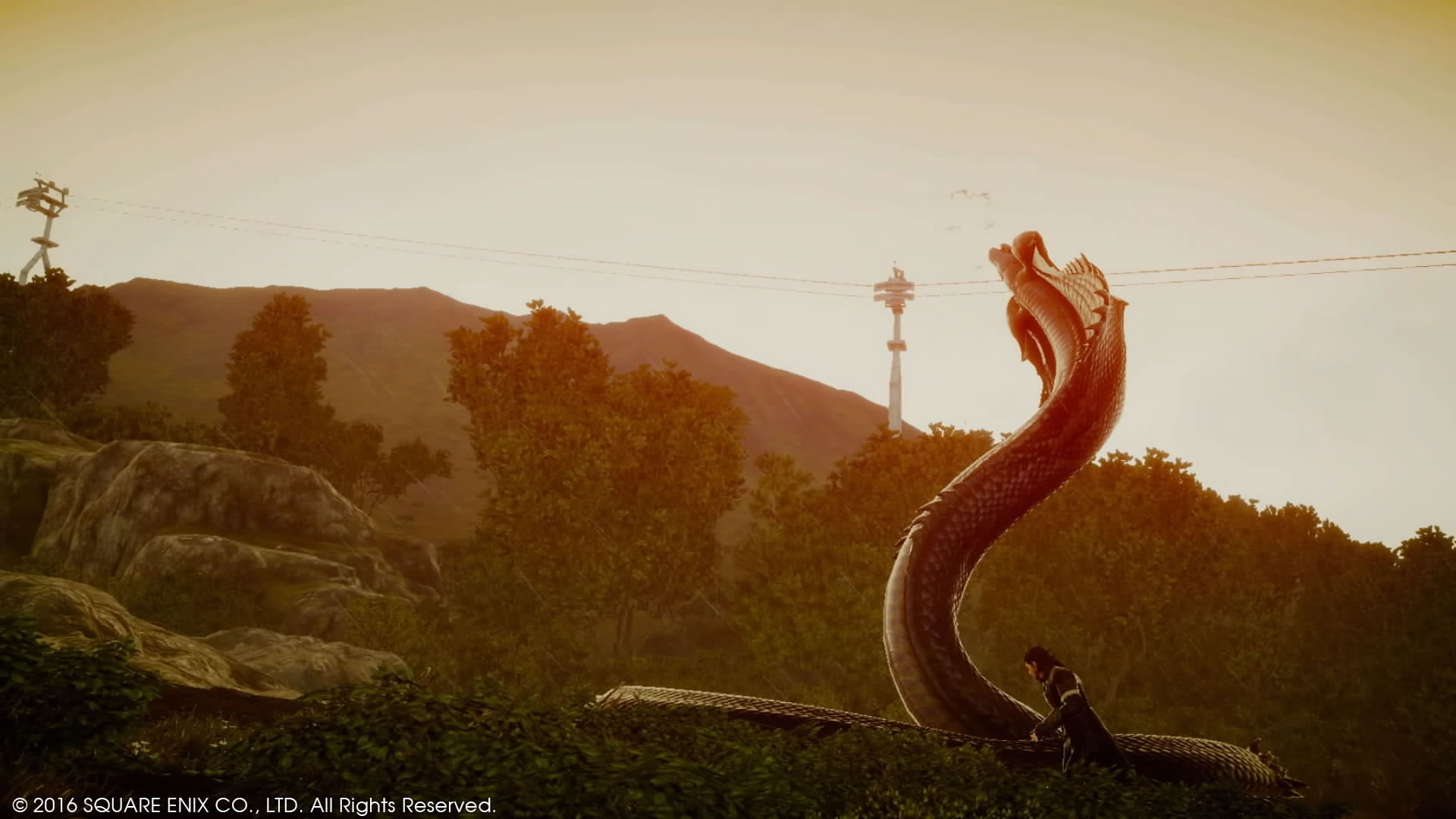 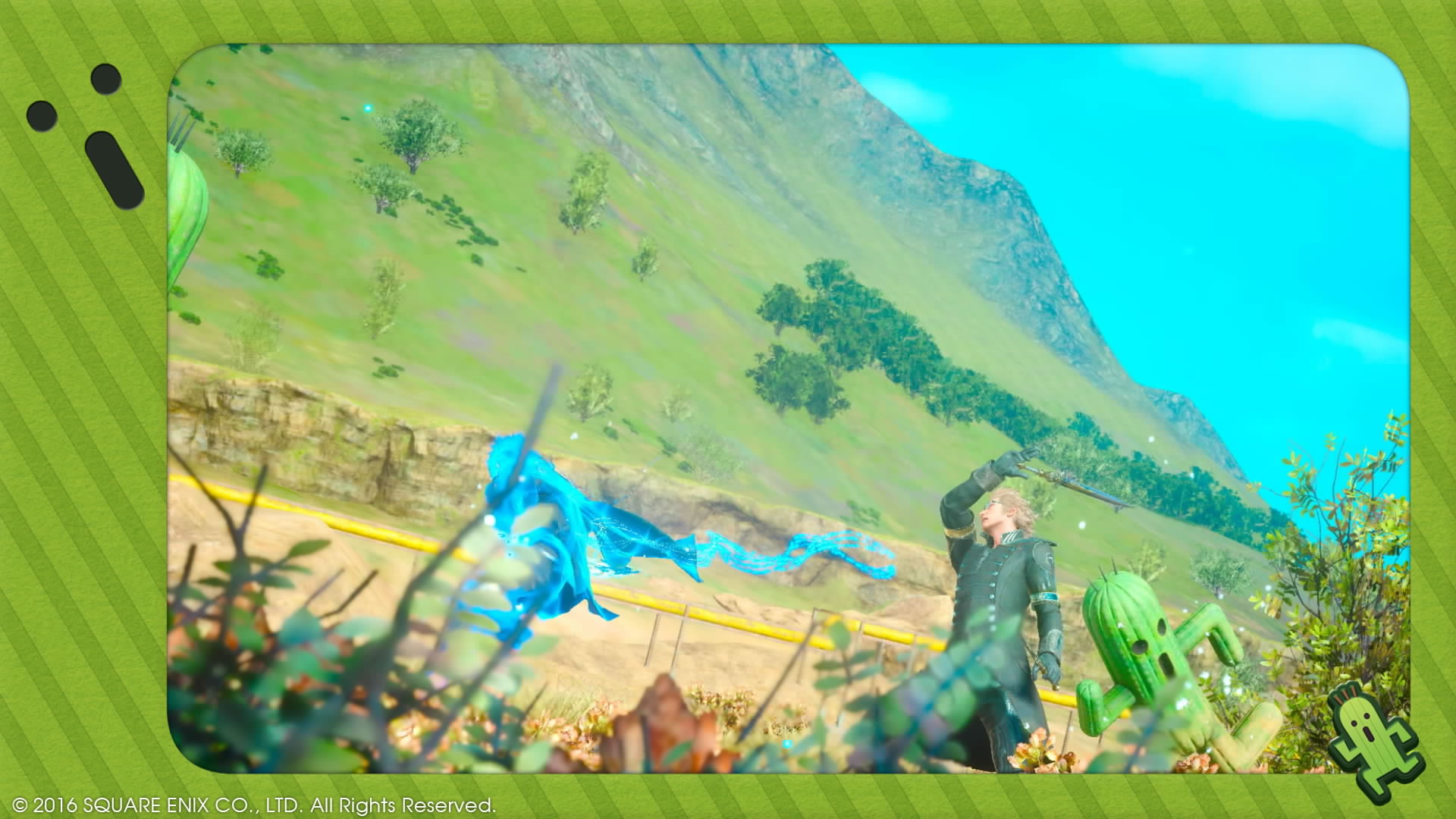 Speaking of the actual world in the game: it’s gorgeous. The scenic views are incredible, various ecosystems coexist with each other rather nicely and the few cities and bigger outposts feel truly alive.
Totally not making this point only to post an Altissia screenie :3 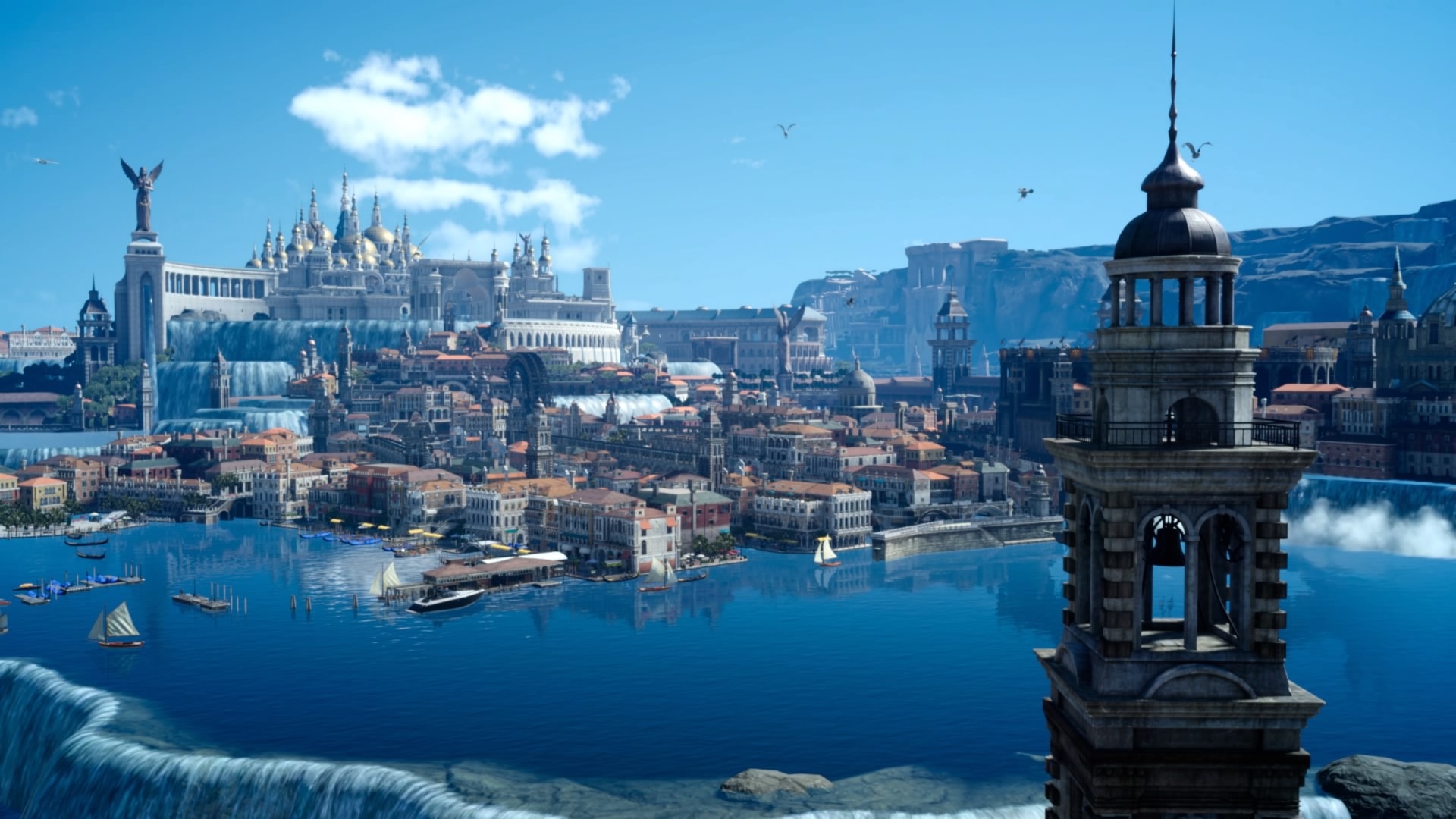 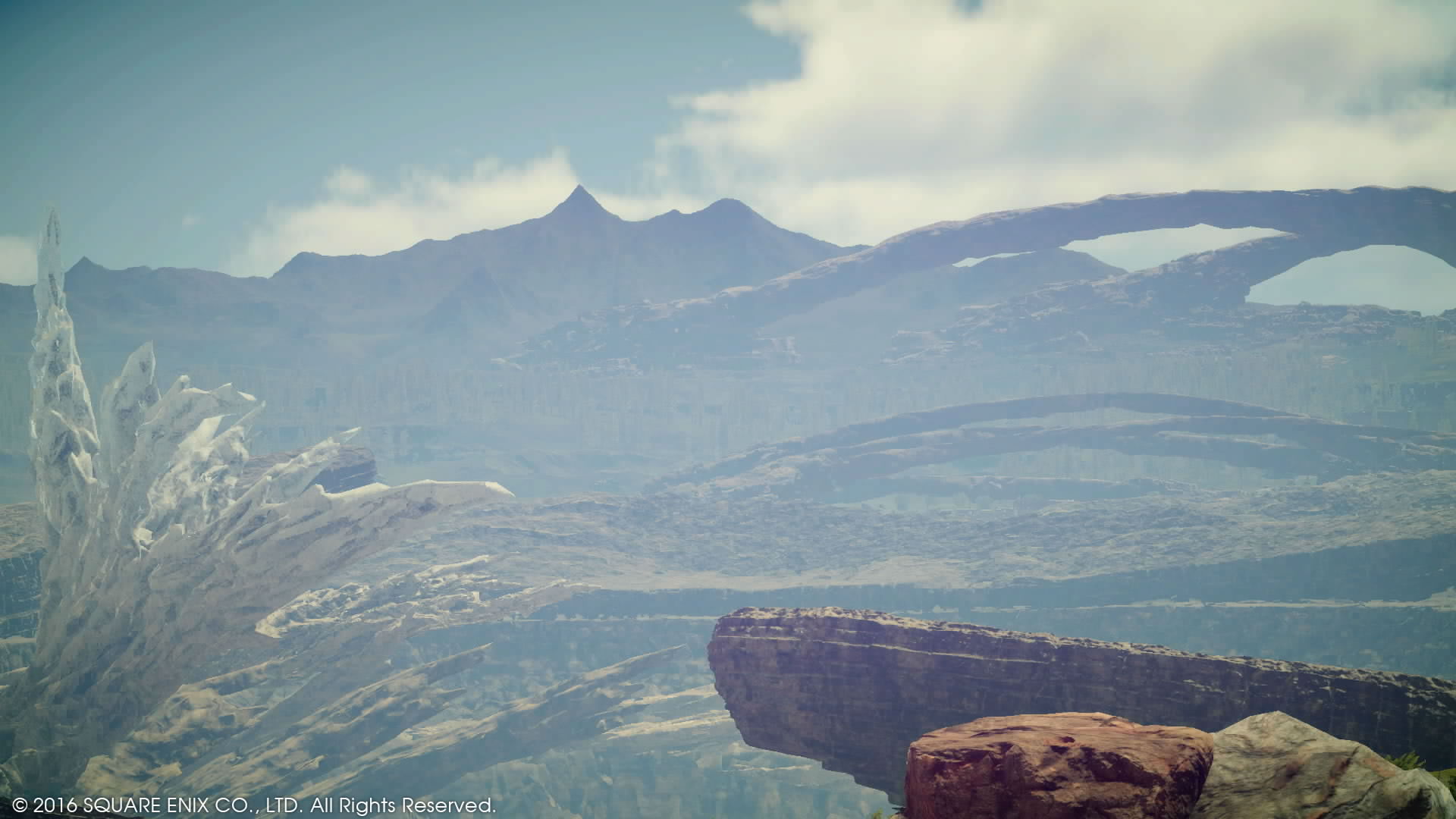 Dungeons obviously possess a huge role in the game’s world. The regular ones follow the simple rule of spawning some mobs and later putting a boss just before your goal, which is almost always a Royal Arm, basically a really fancy weapon which belonged to one of your ancestors. Some of those dungeons are also more puzzle oriented/maze-like than others.
After beating the game and doing all of the nonsupermegasecret dungeons, you can unlock a series of sidequests where you explore dungeons within the regular dungeons. They pose a much greater threat (recommended lvl ranges from 55 to 99…), but also give some truly nice rewards.
And there is the supermegasecret dungeon known as Pitioss, which is basically 5 long hours of platforming hell and I don’t have the strength to talk about this one (that spikeskull thing is from it)… 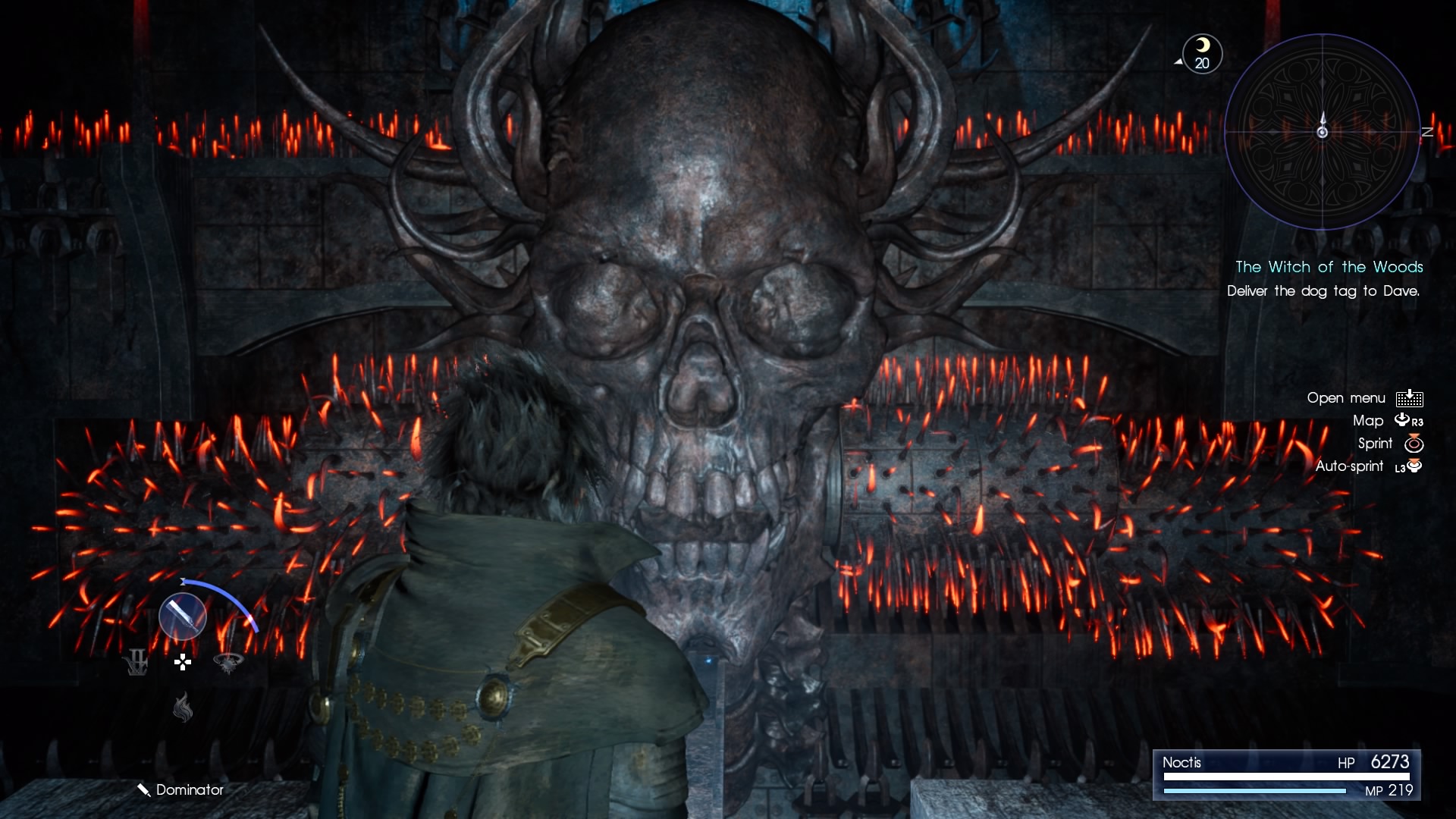 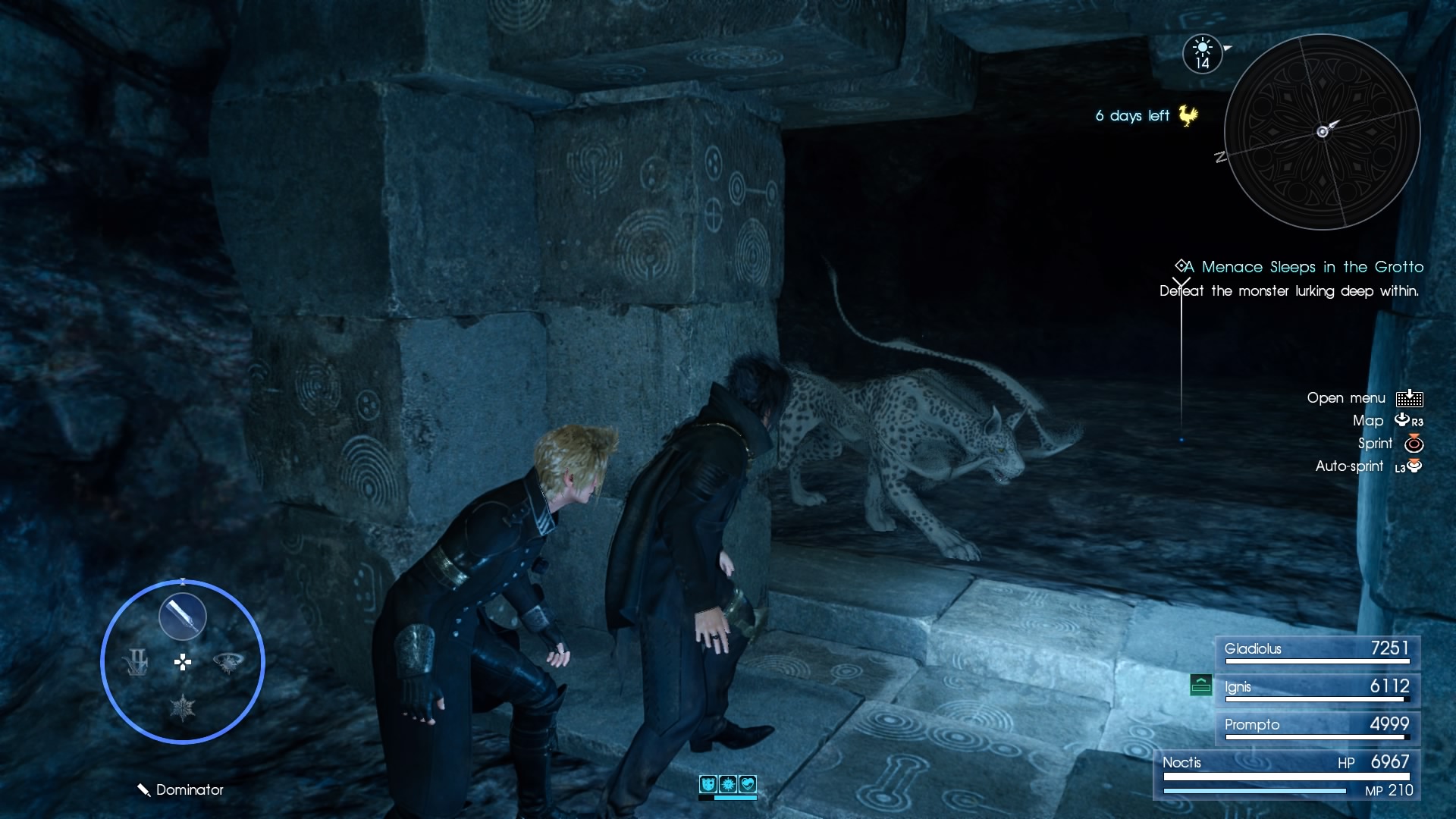 Mini-games
Let’s start withe the most addicting one: Totomonstro. It’s basically a betting arena minigame, where you bet which team of monsters will win in a versus match. The stakes are low, the prizes are sweet and the fights are sometimes incredibly interesting.
Then there’s Justice Monsters Five and I have no idea what this game is about and I saw no reason to try more than once. It’s basically a bizarre arcade pinball game with rather nice rewards for achieving high scores, but I don’t understand it. IiviI
After that we have Chocobo races and it’s just what it sounds like: racing your friends on chocobos and trying to not act like a sore loser when they whipe the floor with you and your giant chicken. :p
And lastly you have your obligatory fishing. Noctis’ fishing skill grows with every fish he catches which later translates to some nice bonuses. I generally love fishing in games (it was my fav thing to do in Okami. :D) and the fishing in FFXV is done really well. 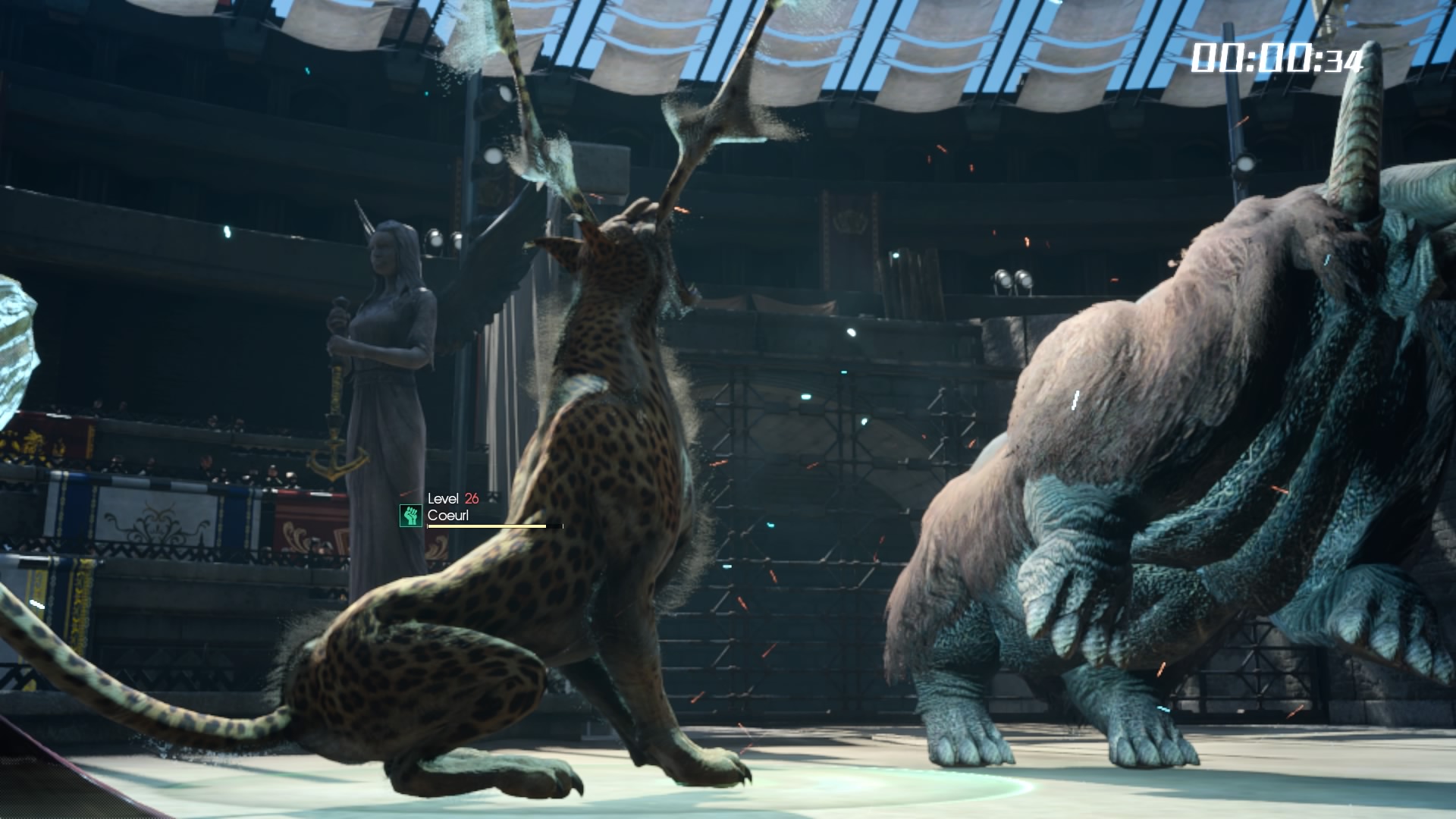 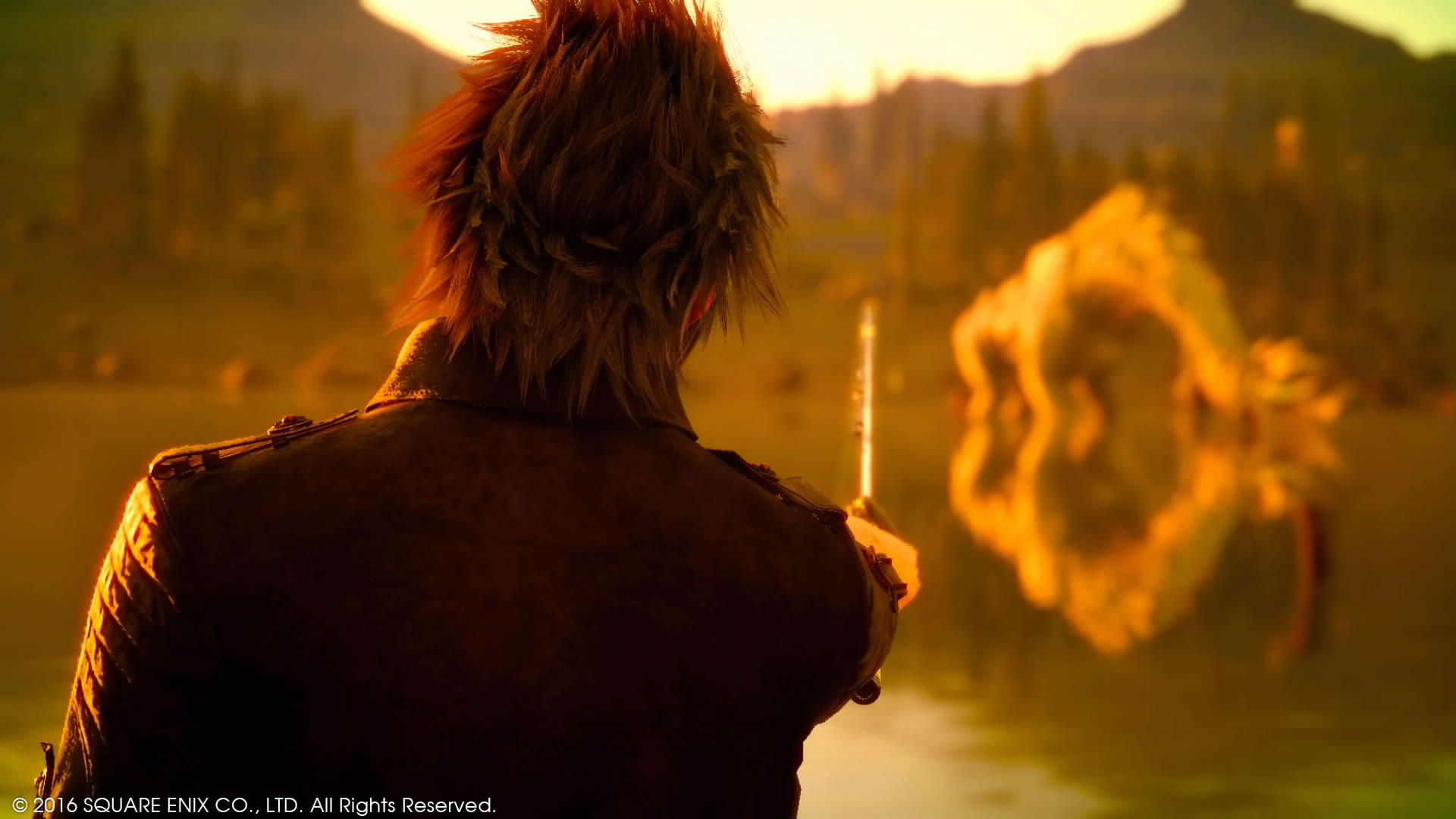 For the most part it was just your usual clipping errors due to the enemies’ sizes/small dungeon rooms. But there was this nasty soft lock that happened like twice when a group of enemies spawned when I was already fighting something, luckily it was incredibly rare. Other than that it was a rather stable experience, it didn’t even crash once through the 90+ hours I put into the game! :O 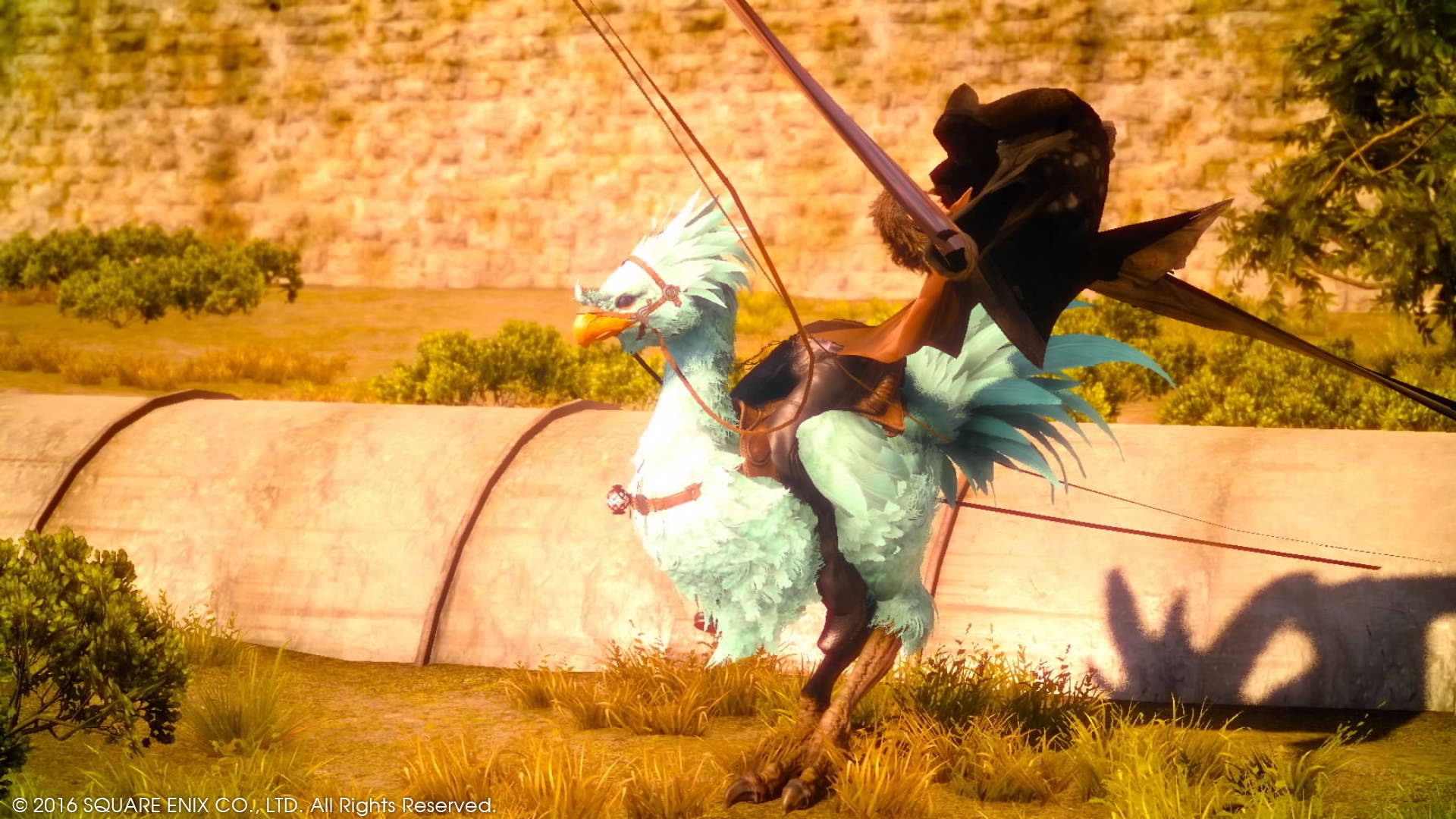 Anyway, whether you survived through this horrendous wall of text or not, me and this adorable chocobo chick wanted to wish you all a Happy New Year! I^v^I
See you in another post or somewhere on SG. :p 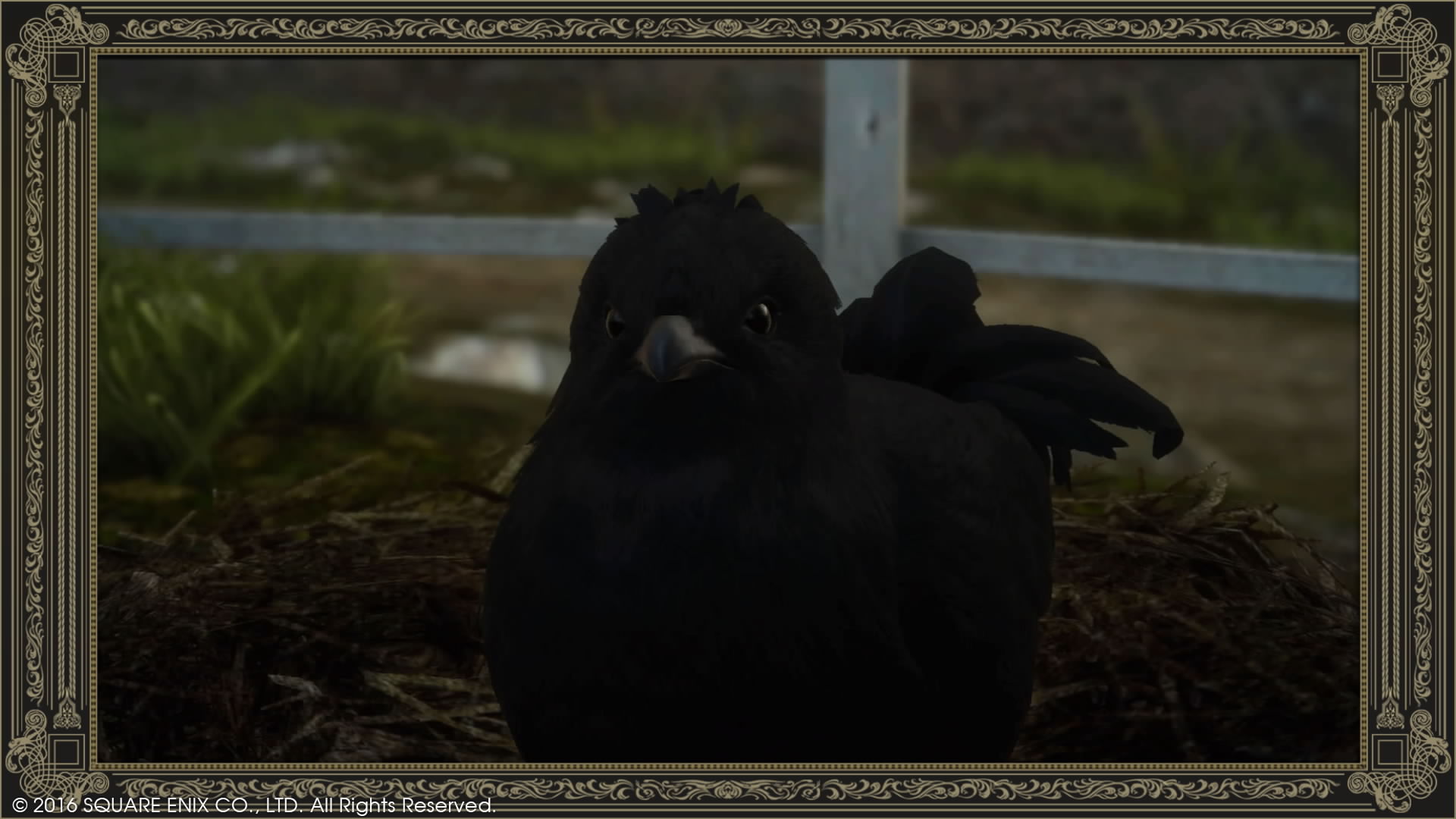 A certificate of completion? I don’t think I’ve seen a game give you one of those since Might & Magic 8

And also, wow, FF XV is a pretty game. I hope it gets a proper PC release.

I was honestly surprised as well by it too. The main point of it seems to be the fact that you choose the photo yourself during a rather emotional scene.

It should translate well to PC, but isn’t Square starting to mess up their ports again lately?

Yeah. Most of the recent Final Fantasy games have had terrible ports. FF XIII-2 was unplayable for me, and even FF V had performance issues on my computer. I don’t think I would buy FF XV at launch if they released it on PC, but as long as people say the port is alright, I would buy it.

Great post Zoey :) I know nothing about the game so sadly I can’t comment on any of those details you’ve given but Altissia looks absolutely breathtaking!

Thanks, it took a while. ^^’ It really does look stunning even though I’m rarely into Italian-stylised cities.

The game seems really great .I wish I had a Ps4 to play it :( I still have some hope that it’ll end up on pc in the future like GTAV and others FFs. You pics looks great. The aesthetics of the game is really pretty. That Venice-looking city looks awesome. Big congratz on finishing it, afterall all FF games are really long and hard to beat.

Thank you! :) I sadly don’t have that much experience with series, but apparently it’s one of the shorter Final Fantasy titles. It certainly makes up for it with the huge amounts of post game stuff though.

43h still makes it longer than the SNES games. 5 & 6 are both sub 30h games. XIII was a 41h game for me, according to steam, and that was despite having lost probably hours on just working around the games many porting issues.

Impressive, Zoey. I’ve never played any of the FF games…I typically don’t like anime or J-anything. But those graphics look nice– not cartoony. I only have a PS3 though (and almost never use it). Thanks for the nice update! =)

Thanks :3 If I have to be completely honest this was my first true FF experience (I don’t count the ~2h I spent in Kingdom Hearts), but I got FFX for Xmas so I’ll try to catch up on the series.
Why? IiviI The PS3 can be a beast and still love mine.

I’m just more of Steam/PC gamer. I bought the PS3 mostly for Rock Band back in the day, and got a few more games, but not too many. Actually, the last physical/DVD game I purchased was Dishonored for the PS3…and I can’t seem to find it! I’ve been spoiled by Steam/digital downloads.
I’m also not very good with controllers…at least anything where you have to aim!