Back at it once more, this time on steam. Before, i actually had them in physical form, none of them are a complete version, i would collect near released dates, later, not even that long after, i would acquire different releases, thanks to "free games" from gaming magazines. That somehow included, FEAR COMBAT, which was free2play, as any other MP mode is, but this one came in a CD without the main game. it's the lamest thing that could be included in a magazine, i should look into it to know which magazine it was

Anyway, F.E.A.R is one of a kind. If i ever find the strength to check the entire collection, the one thing i want to make clear, is that both Monolith and the other studios that worked on it, had a terrible time to replicate it. the expansion packs where still made on the same engine, but once the sequels rolled in, FEAR started aiming towards the COD crowd
Perhaps the biggest hurdle, is that FEAR was a simple game. Coming off the original, it was easier for Timegate to address the lack of content on the expansion. But for Monolith next entry, they soon entered a point where there was nothing to add. They opted to remove from FEAR 2 rather than add, with a minimum attempt of modernizing the series. While FEAR 3 from Day One went towards a COD direction.

The original, due to time and budget constraints, does not have much to offer in terms of variety. Though, that worked favorably for Monolith, has instead they put emphasis on what distinguish them from other developers

FEAR is a game of opportunities. People associate Monolith with advanced AI. To me FEAR sits between non traditional AI and a carefully built map. A few other games use Goal-Oriented Action Planning architecture, its easily searched and a good read. However this is the one game in the franchise, where the AI can surprise the player
It is interesting to check the expansions and the subsequent sequels, in how level design can deconstruct what once felt like battling actual beginner level players.
So, i always felt not enough credit was given, to whom an monolith was creating the maps. because the lack luster environment and recycled sets and textures just sort of become a more noticeable issue.
But yeah, there is nothing like it. They make short decisions, they are aware of the map itself, and which objects are interactable to them. the most interesting factor about FEAR AI, is that very few battles feel like a typical game encounter, when an enemy flanks the player to shoot through a window, its not an heavily scripted event, it's a quick decision based on player position.they also show individual and squad based behaviour. In turn, it feels different every time you play the game. I don't remember the battle's, just actions made by the AI

The dialogue is also important on selling the magical AI. It gives the illusion of inteligence, aswell as serving a gameplay purpose, in giving the player useful information.For example, most of the time, enemies don't spawn-in during an encounter, they are already roaming the area looking for the player, if they hear sounds, they communicate with the rest of the squad
Dynamic lighting might contribute to the horror atmosphere, but it is most noticeable during combat and identifying enemy position through shadows. It is unfortunate, that immediately after this game, it would fall to its lowest form.
FEAR has a small arsenal of useful semi realistic weapons and some more overpowered for easier disposal of large armored baddies. I just want to point out that, the SMG is not only the weakest weapon due to its spread, it has very little reason to exist when the burst rifle has full auto. yet, the SMG is the early weapon for both expansions.

I find FEAR more interesting at hard difficulty, as it is, the easiest of the 3 campaigns. However, it's the only that doesn't over rely in its slowmo ability, so i would recommend medium to test the AI in a fast paced tactical shooter without the ability, because its totally doable here, yet not at all in the expansions.
if there is any criticism i can give. The lack of variety in sets, textures and objects. Lack of verticality, lack of enemy types.
i dont think its fair to add overconvuluted story to the mix, as Monolith often avoided doing that. F3AR being the first to have a "compelling" narrative. While FEAR doesn't really go to such lengths. Even with the expansions that are set during or right after the event of the first one. The main objective is obvious enough, and most you need to pay attention are the Replica Forces, and to know who Alma and Paxton are.
it's great, i'm of the opinion FEAR doesn't do much, but what it does it does extensively and does it exceptionally well 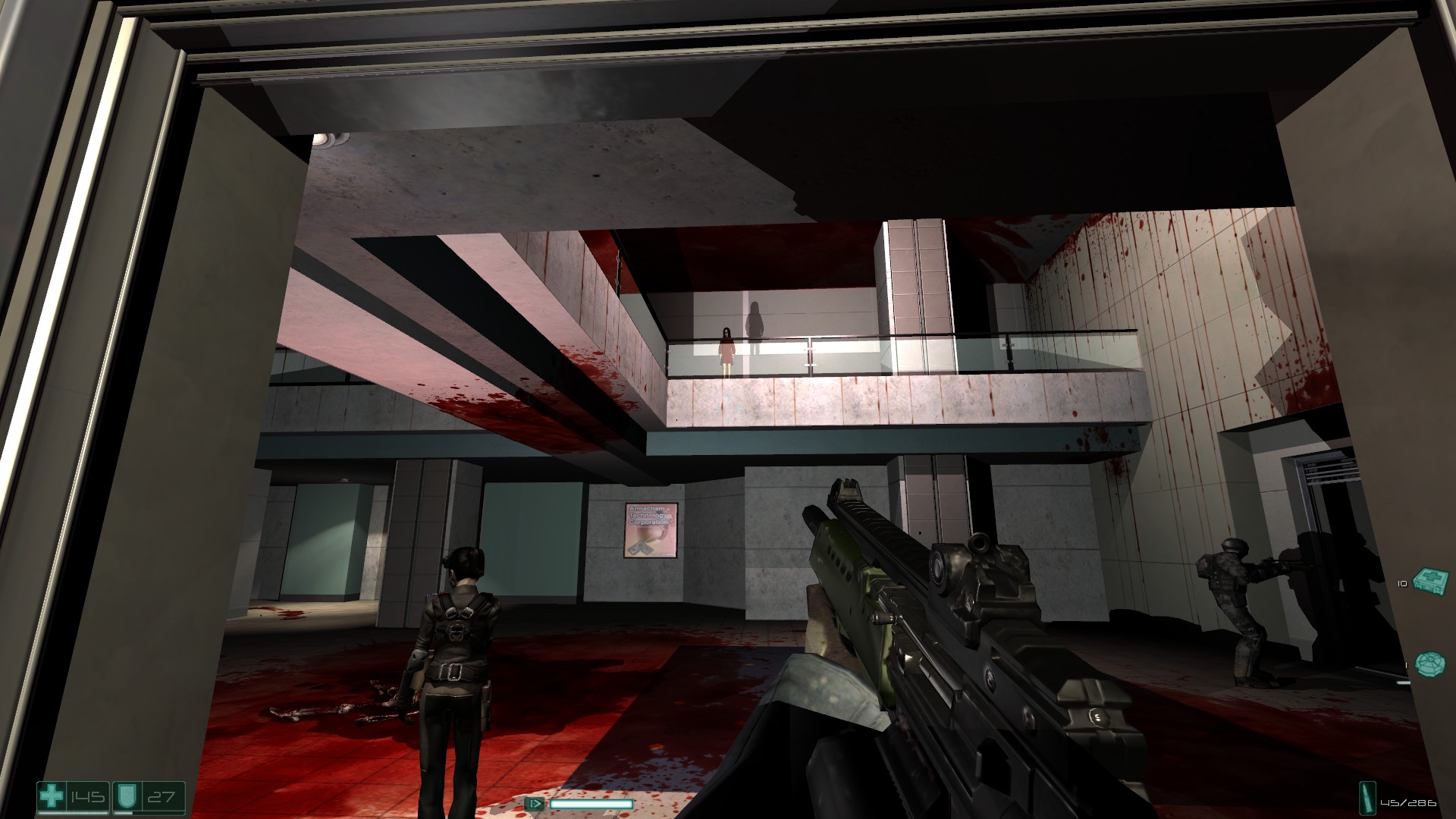 I have a problem with extraction point. Even though it requires FEAR to run, it sets up its own folder with non widescreen settings. Even if i change to the correct resolution, the game reverts back to 4:3 every time i start it.

Ok, so this aint Monolith, Vivendi had outsourced the expansion packs over to Timegate.
Rather than trying to copy the original, TimeGate decided to address the most criticised aspects. They did a good job at that.
There's more content, more level variety and much more verticality to the maps
Overall, the game feels more scripted, most encounters are an event a challenge for the player. Enemies are inserted into a map designed specifically for them to interact with it in a certain way, a spectacularly predictable piece.
while the AI doesn't really shine on most of the new areas. The direction in taking FEAR to a more challenging match, filled with all kinds of destruction, was fairly successful, even if a bit game like
TimeGate seems to understand FEAR level design better than the F3AR team. They revert back to the series of corridors and interconnected rooms of the original, but often fall for linear corridors and open areas. They often ignore the little details, like shadows. They don't always let replicas roam an area
But thats mostly the chosen direction. They want those explosive moments, they want to use the large areas to ambush the player. And a new arsenal is offered to the player, not just for the changes they made in enemy equipment, but to the map itself. You get these throwable sentries that stick to walls and provide protection over non covered angles.
The one strange thing with the expansions, is the need to out stage the original arsenal, tipping the weapon scale to OP sci fi. 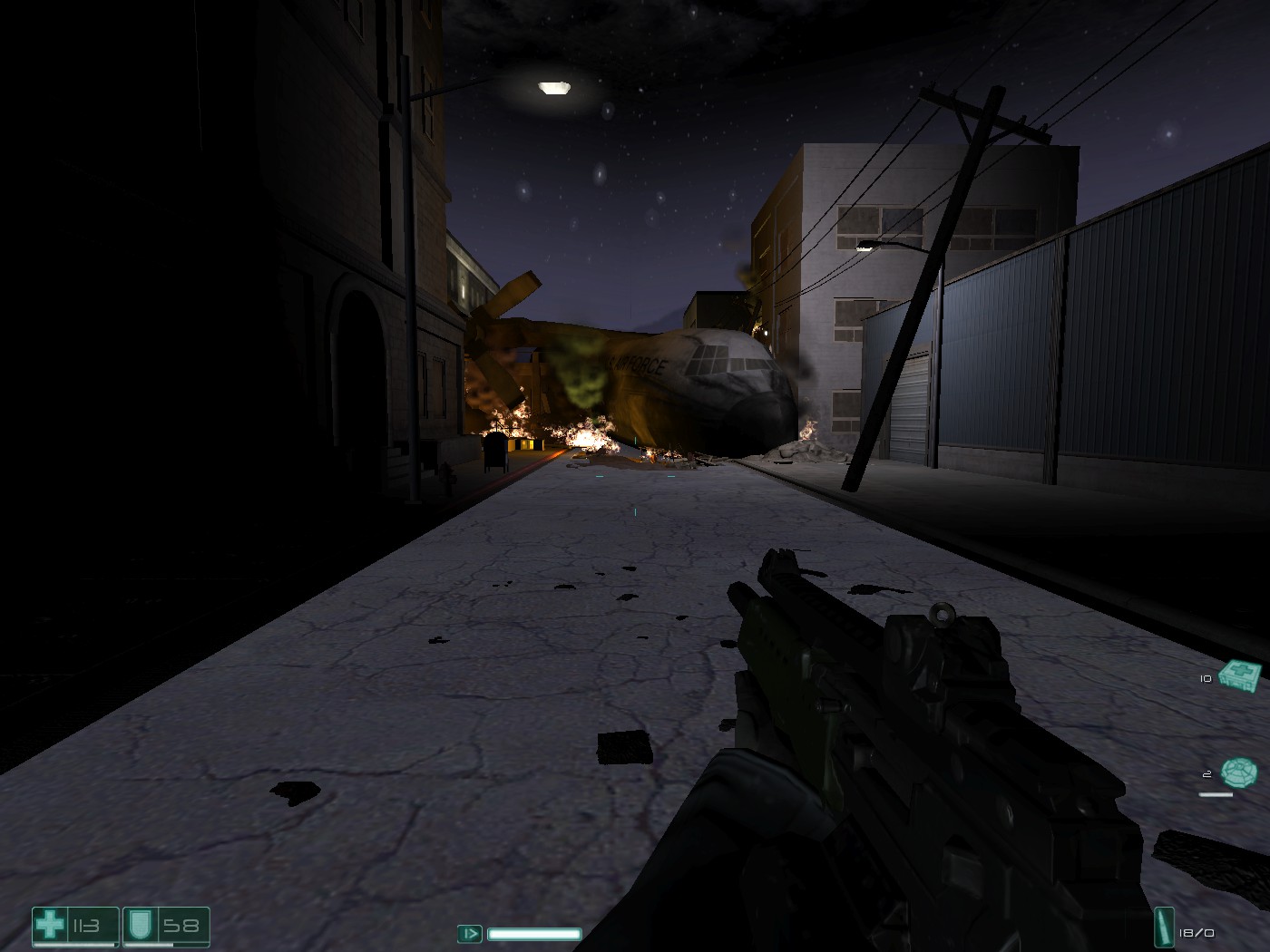 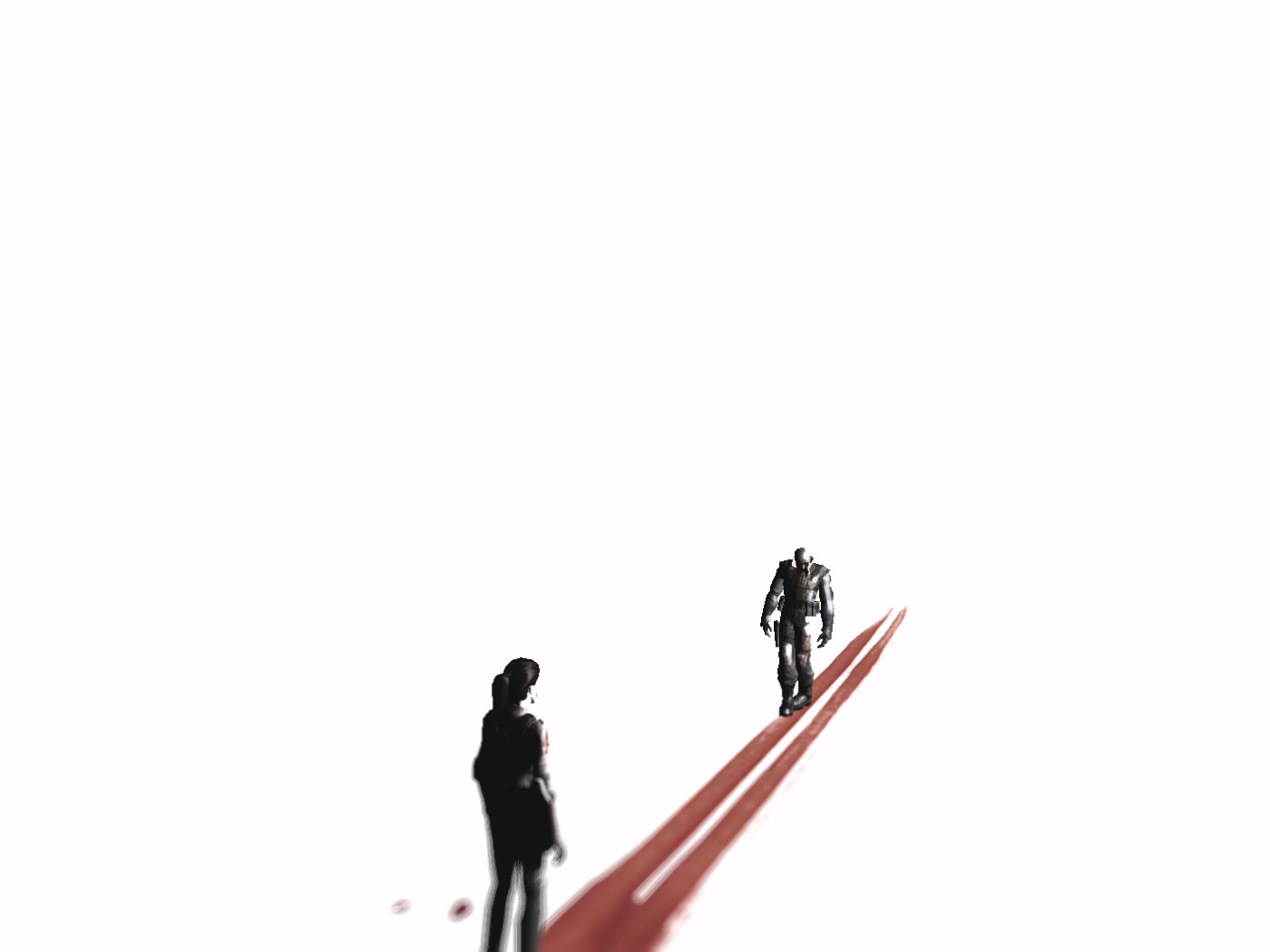 The game is not entirely bad, undeniably weaker, it feels more like a random game on the FEAR engine with the same mechanics
PM introduces a new character. On Paper its always a good idea to experience the same game through a different character, however, they go through extreme lengths to justify keeping the gameplay as it was, instead of designing and adjusting difficulty for a fast paced tactical shooter. they also add unjustified interactions between your new character and both Alma and Paxton. If it was to keep everything the same, why even replace the main character?

PM also excels in bad maps, that often give no opportunities to the Replicas. An overabundance of long corridors and chokes. Other levels include open areas, with cheap cover. The new enemies work well within the level constraints. But often you are slaughtering through weak replicas. Taking a corner and finding 4 enemies just chilling in a corridors with 0 chances of surviving is a common occurrence.
the levels themselves add more down time, with long corridors and stretches that you must cross

As for enemies, the weaker and most common replicas are reduced to jobbers with slowmo trivializing fights. The bad level design also pushed the player into relying heavily on slowmo due to the latent risks of advancing without proper cover.
The new added enemy Nightcrawlers have the same ability, giving the player no viable options other than employing the same strategy
There's a lack of armored baddies, PM prefers to achieve their difficulty quota by pitting you against a few enemies of the same type.
The new paranormal enemy is the scarecrow, An interesting concept, for an enemy below ground that you can spot by a large black poodle on the ground, once the player unknowingly steps in,the enemy grabs the him and pushed him down. It worked, about 2 times, there's a few reasons why they dont work on PM, even as a jump scare, no matter how hard they tried.
For one, this game is far brighter than the rest, exposing most of the puddles. It's also relatively fast to just point straight down and shoot, they also tend to drop multiple on the same location.

Overall, its a mediocre expansion that just so happens to work on the FEAR engine. but they didn't put much care or thought into it. the skybox is horrible, they reuse some levels. I didn't use the new The grenade launcher all that much, but Nightcrawlers did, and that thing has an insane explosion radius, 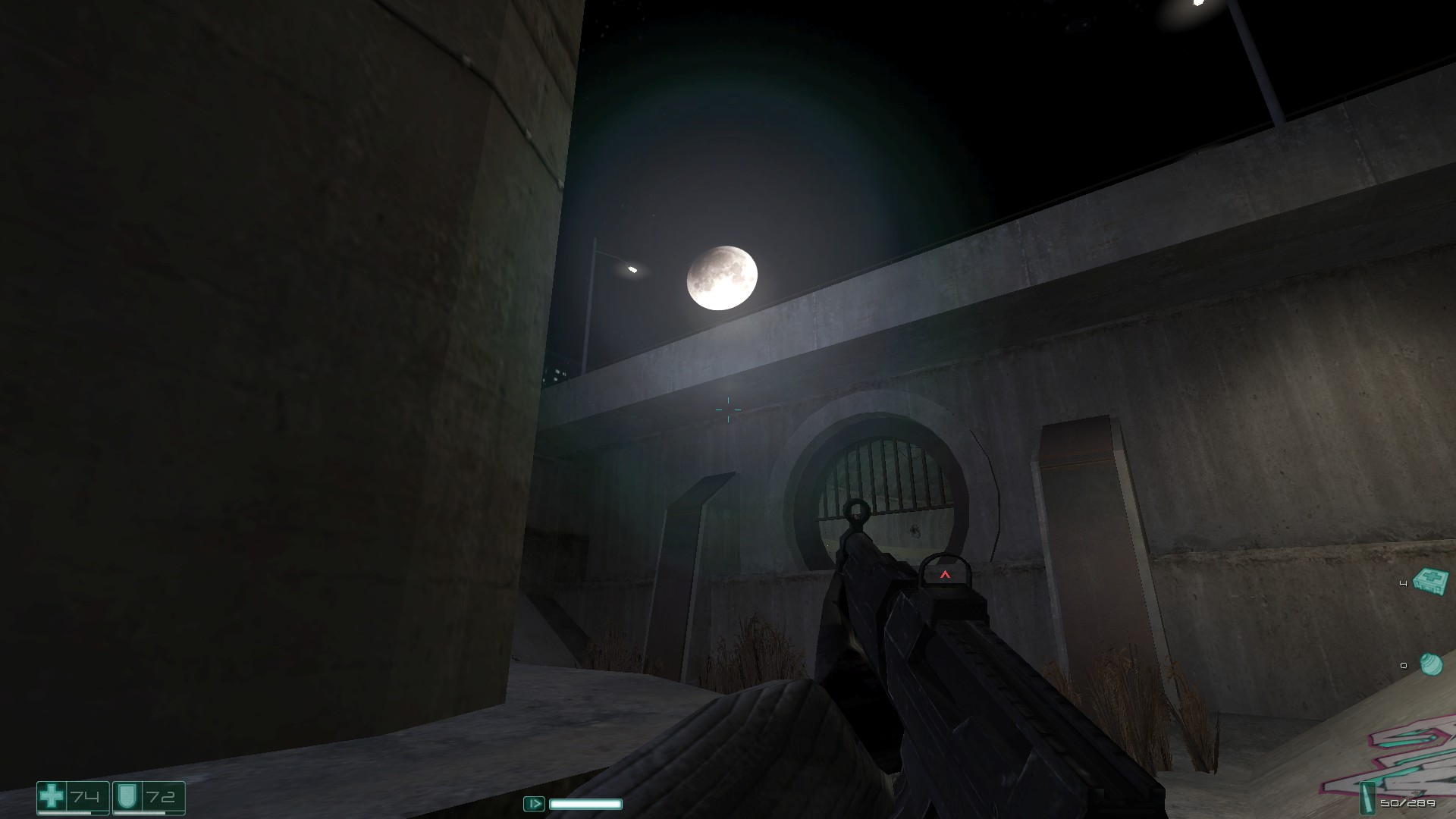 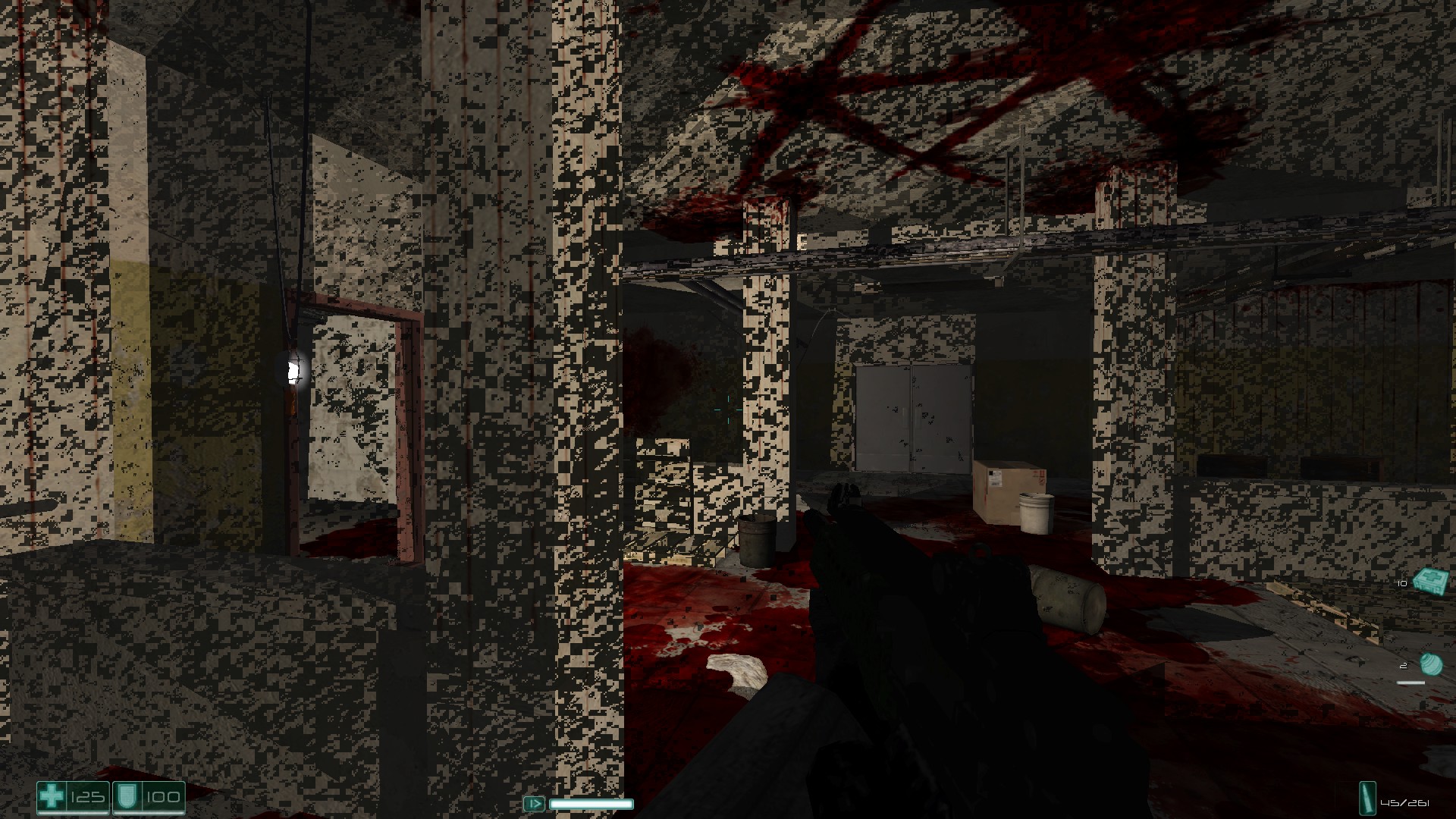 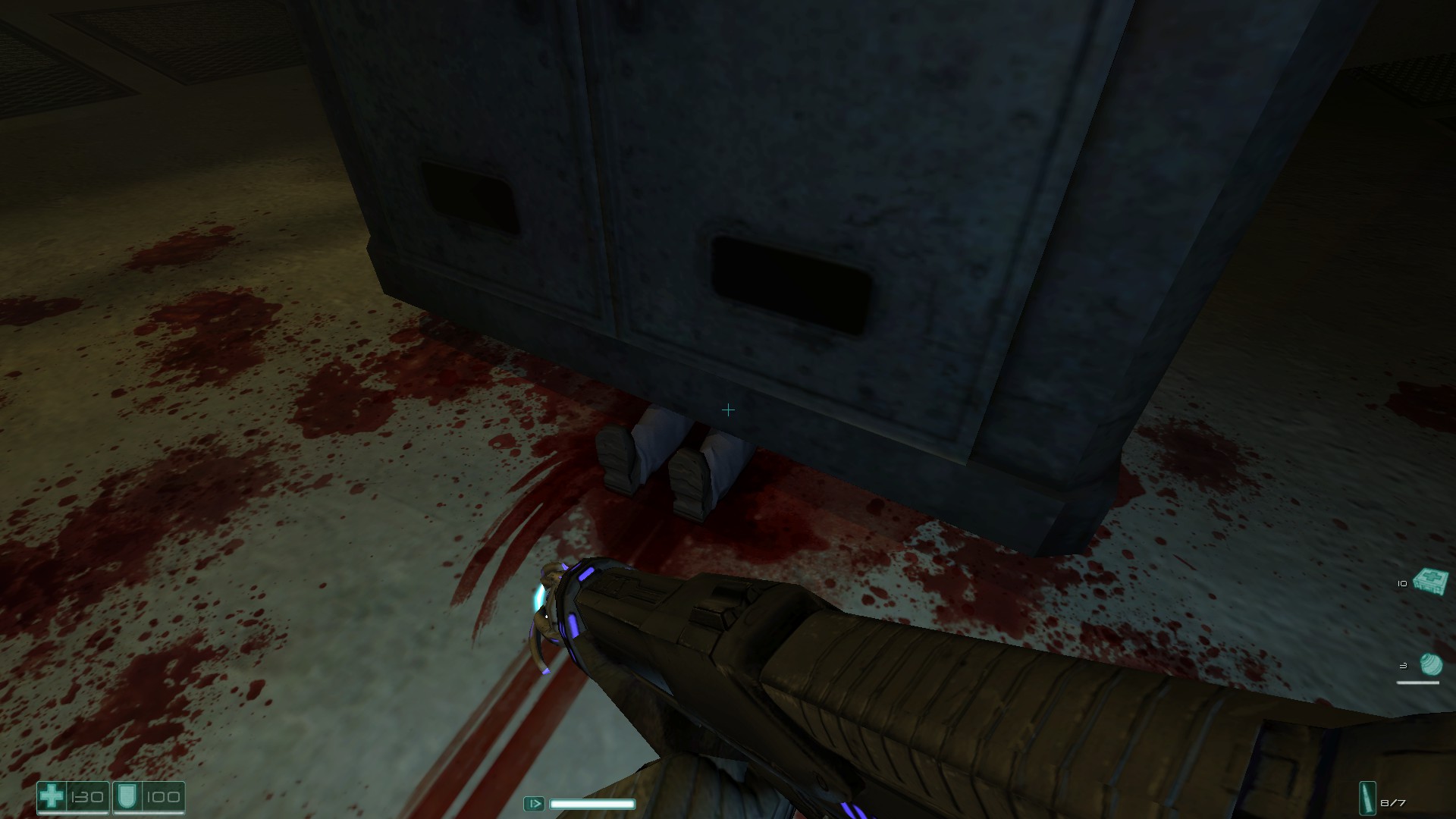 They seem successful at re-releasing a game that was outdated months before it came out, i mean this is better than the previous Turbo Pug but its still crap.
Still a one button runner, Same hazards with more variations. Looks better, yet the obstacles still blend with the environment. The leaderboard doesn't work. It overheats CPU like no other.

I only played the main game of FEAR, I enjoyed it very much. I never know whether to go back and try it once more, out of fear of spoiling the nostalgia.

Never played the sequels, interesting to see them put in perspective in your review!

The original holds up well, i wouldn’t recommend the expansions other than those are part of the steam pack. FEAR 2 is not very good, 3 isn’t even a monolith game
The AI is still fantastic. I wouldn’t call it aged, but gameplay cuts on smaller aspects like an Iron Sight perspective.