First Report of the year and it's a chunky one where the written piece barely reflects the rating. I also spent better part of the week trying to just write something, but my thoughts wouldn't come out at. Why? This is the game that left me the most conflicted so far, primarily so because forces pulling apart are different in nature – story and mechanics. Enjoy the read and have fun because this is where I'd like to hear second opinions. 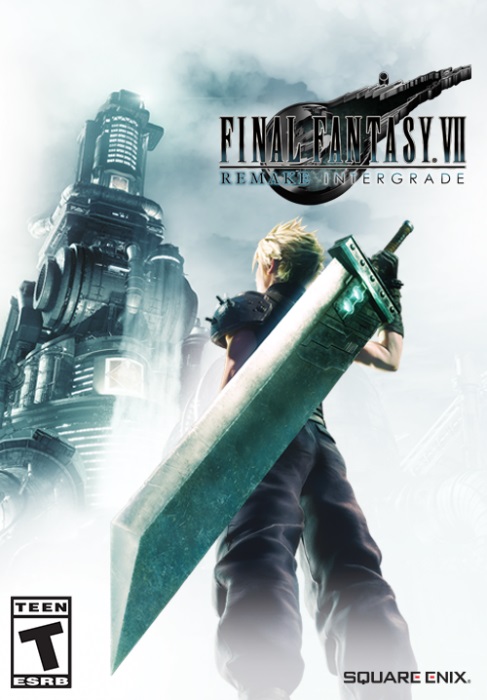 Something should be made clear before I share my opinion on Final Fantasy VII Remake Intergrade. I played the original game almost 25 years ago when it was new and like it very much. However, I do not see it as some sacred cow that is beyond reproach. This continues to inform my opinion on the remake as well as its problems, structural and narrative alike.

In case you're unfamiliar with what's going on and haven't gotten some of it through sheer osmosis over the years, something that's going to become a point of criticism I have for FF7R later on, story is as follows. There's this stuff called Mako energy that Shinra Electric Power Company has used to advance the world akin to something of a technological revolution. Stuff comes from the planet itself and is poorly understood beyond the fact it can be used for practically anything. Being a greedy mega-corporation Shinra cares for little beyond exploitation going so far as to have their own city of Midgar, capital of Mako. Game itself opens to an opposing group called Avalanche executing their operation to blow up one of Midgar's Mako reactors in order to thwart Shinra. We step into the shoes of a mercenary called Cloud Strife and company making the daring terrorist raid. Events quickly spiral out of control.

Here we have the very first mistake – mishandling of the story itself. Game should've really been subtitled Re-imagining rather than outright Remake. This doesn't come from a purist, mind you. That's not my hang-up here. Rather, FF7R is in limbo so far as for WHOM it was made as it almost expects from you to already be familiar with the PS1 original. If you are a fan you'll just be annoyed by cliff notes storytelling still expecting the same emotional payoff. FF7R doesn't cover the entirety of FF7, but rather only the Midgar section which got stretched beyond belief to get as much mileage out of it as possible. That's not always horrible because the final package does benefit from fleshing out some scenes, but for each of those there's just as much needless padding. I'm not even going into the conclusion or story differences here. Issue at hand is where the hell do you go from here since you've essentially replicated the final showdown of the original minus all the stakes involved? Also worth noting is developers draw from expanded material as well. I leave you to be the judge of how much we really needed from Dirge of Cerberus, for example.

Ex-SOLDIER Cloud, freedom fighter Barett. Bouncer Tifa and flower girl Aerith. Those in the know have already realized there's a missing character here that should be playable given what's covered, but I can almost overlook it since characters in the Remake have much more mechanical definition to them. Introducing a character who's essentially playable for the last hour or so would've been a waste keeping that in mind. Even if increased production values with voice acting don't do it for you inclusion of expanded scenes all-around should. Your Avalanche cell gets a hell of a lot more personality, so much so I thought developers would surprise me by making them playable at some point. By the end you've warmed up to them and feel like you know these people. They're just some of many characters, both new an old, who get way more attention.

Amusingly enough it's almost all smooth sailing from this point onward seeing as I generally like how FF7R plays, doubly so because I'm not a big fan of how it implements the dreaded Stagger mechanic I could not stand in FF13. Who knows, maybe this weird action-meets-ATB combat is the real game changer? There is one obstacle to overcome still, however.

Padding. Man, you could probably lose good few hours just by removing side quests amounting to little more than busy work. Why they felt the need to include this is beyond me, especially since FF7R doesn't fall into open world trap where you have to dot the landscape with menial tasks. Now that I think about it I have this suspicious nagging all the side content exists to justify the existence of towns aka places that are not dungeons filled with enemies or cutscenes galore. You get the impression simply making a pit stop for items you won't really need would've made these places a waste of time so more of to-do was invented. While this DOES result in adding more relevance to characters, enemies and places that were throwaways in the original game I could've personally done without it. Character like Chadley essentially exists to tack on progression systems to the game or awkward method of unlocking Summons, for example. Sometimes this obsessive need to have more has detrimental effect on game's pacing as it stops dead in its tracks more than once. Penultimate chapter got hit HARD by this. 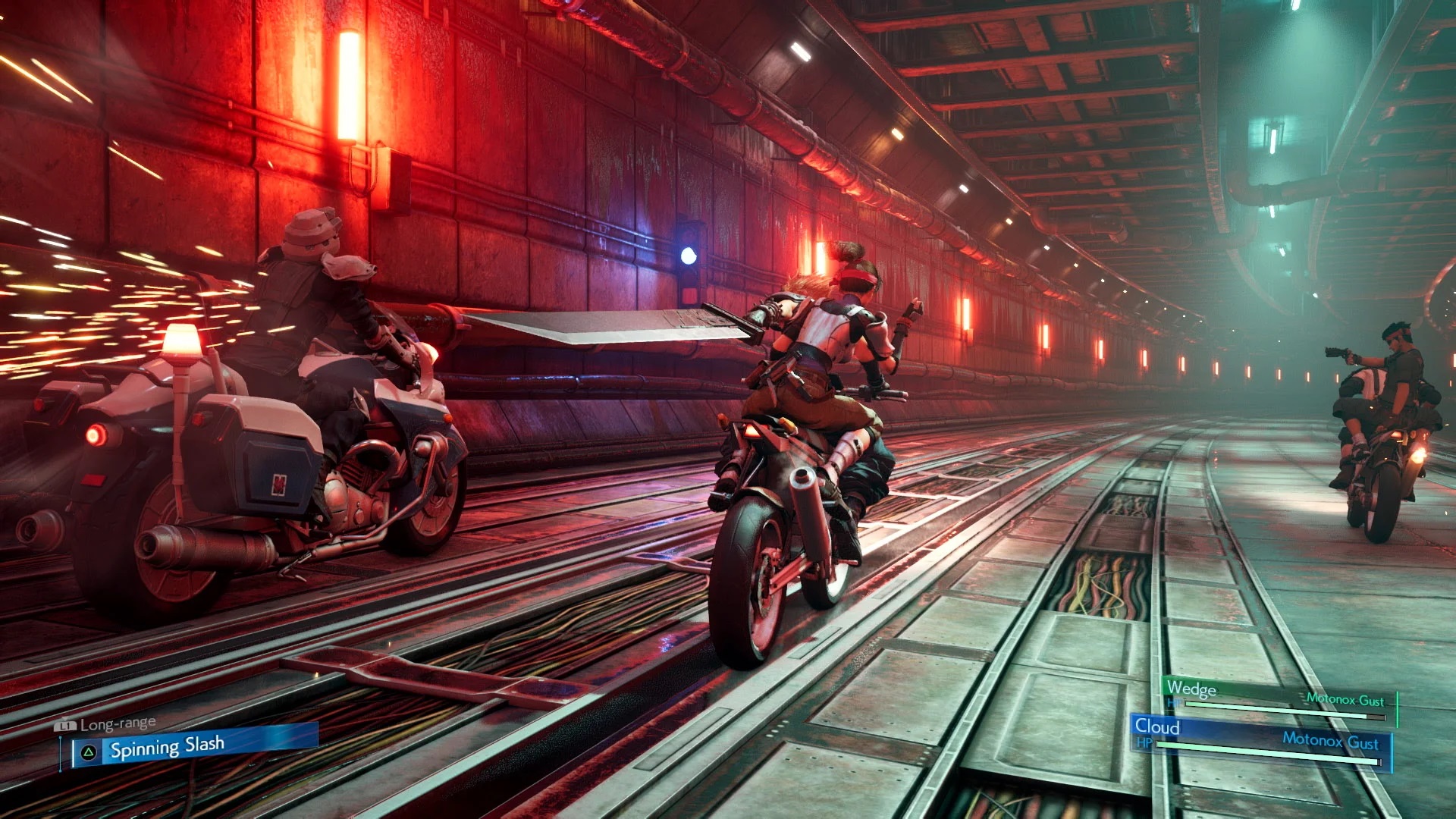 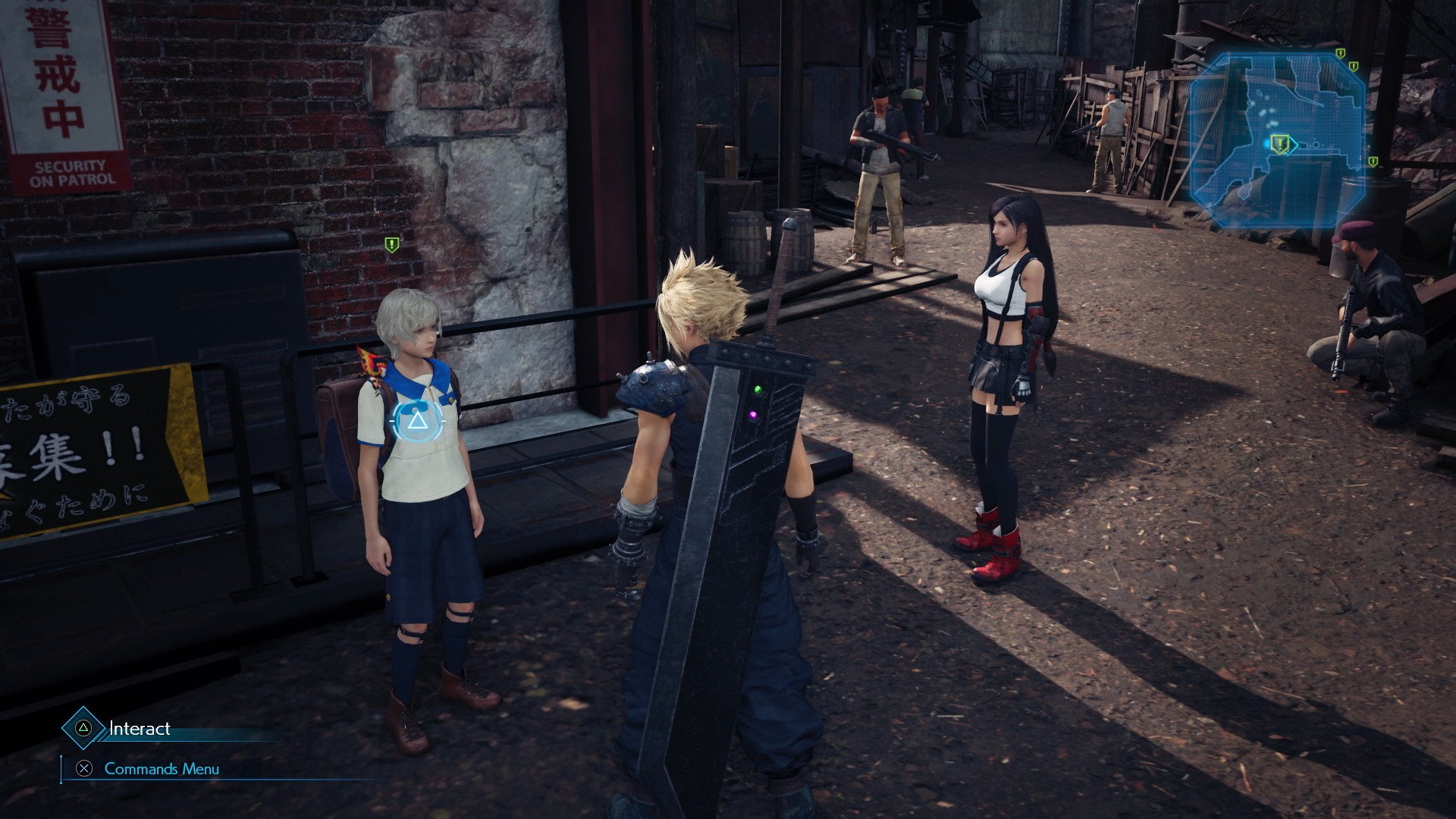 It's debatable whether some additions just add busywork or not. 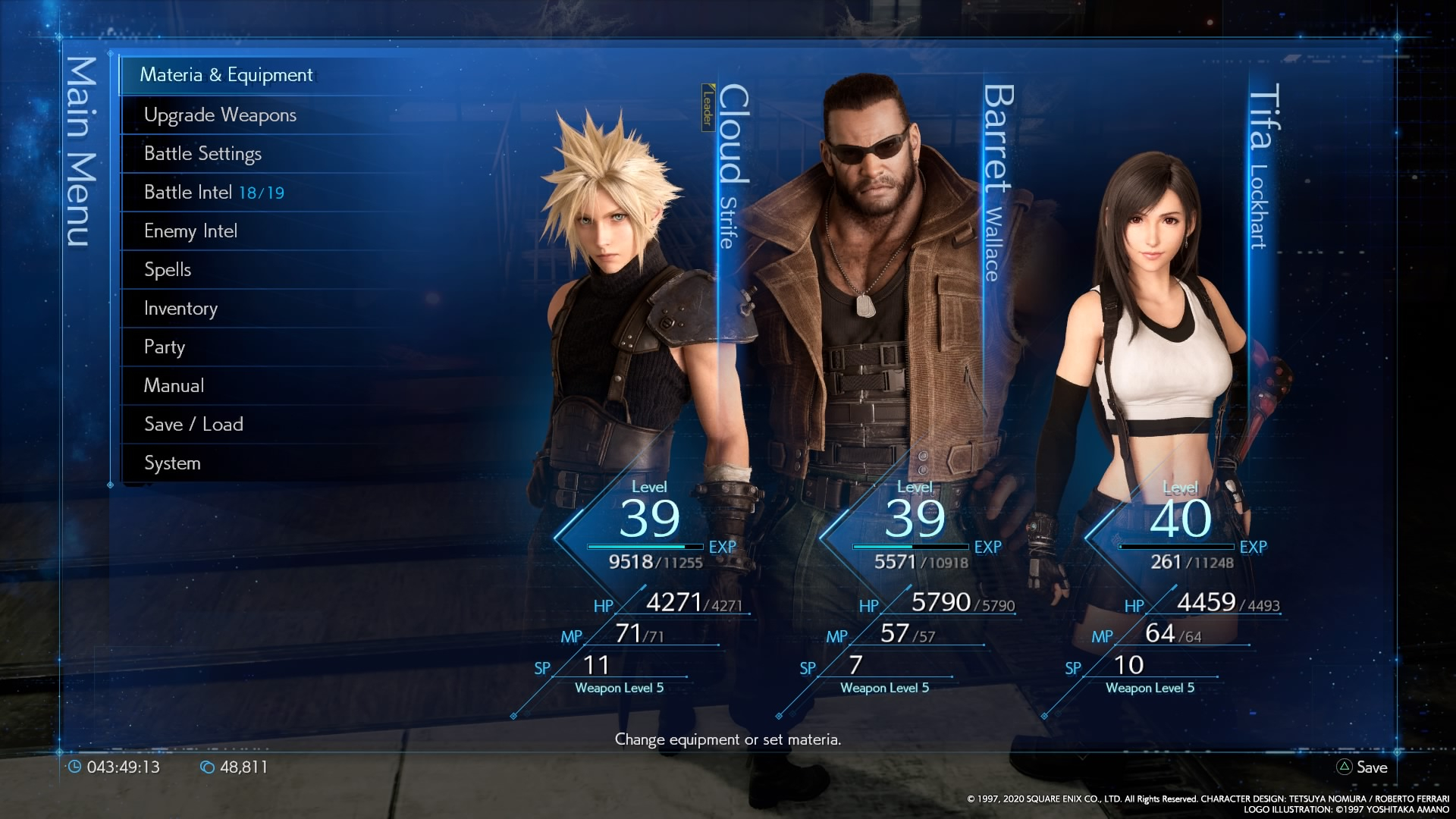 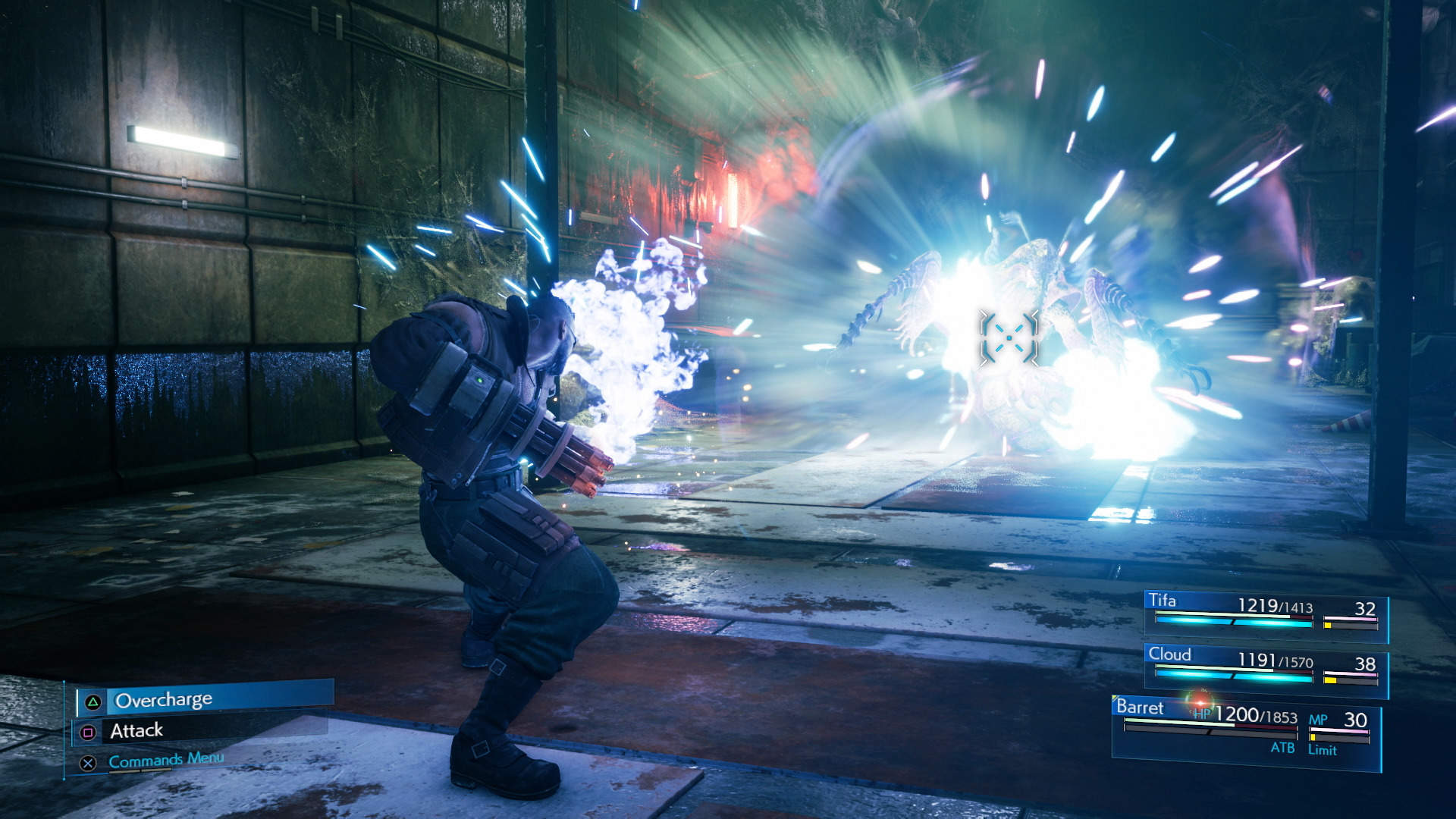 Characters other than Cloud are playable and surprisingly come with their own gameplay twists. 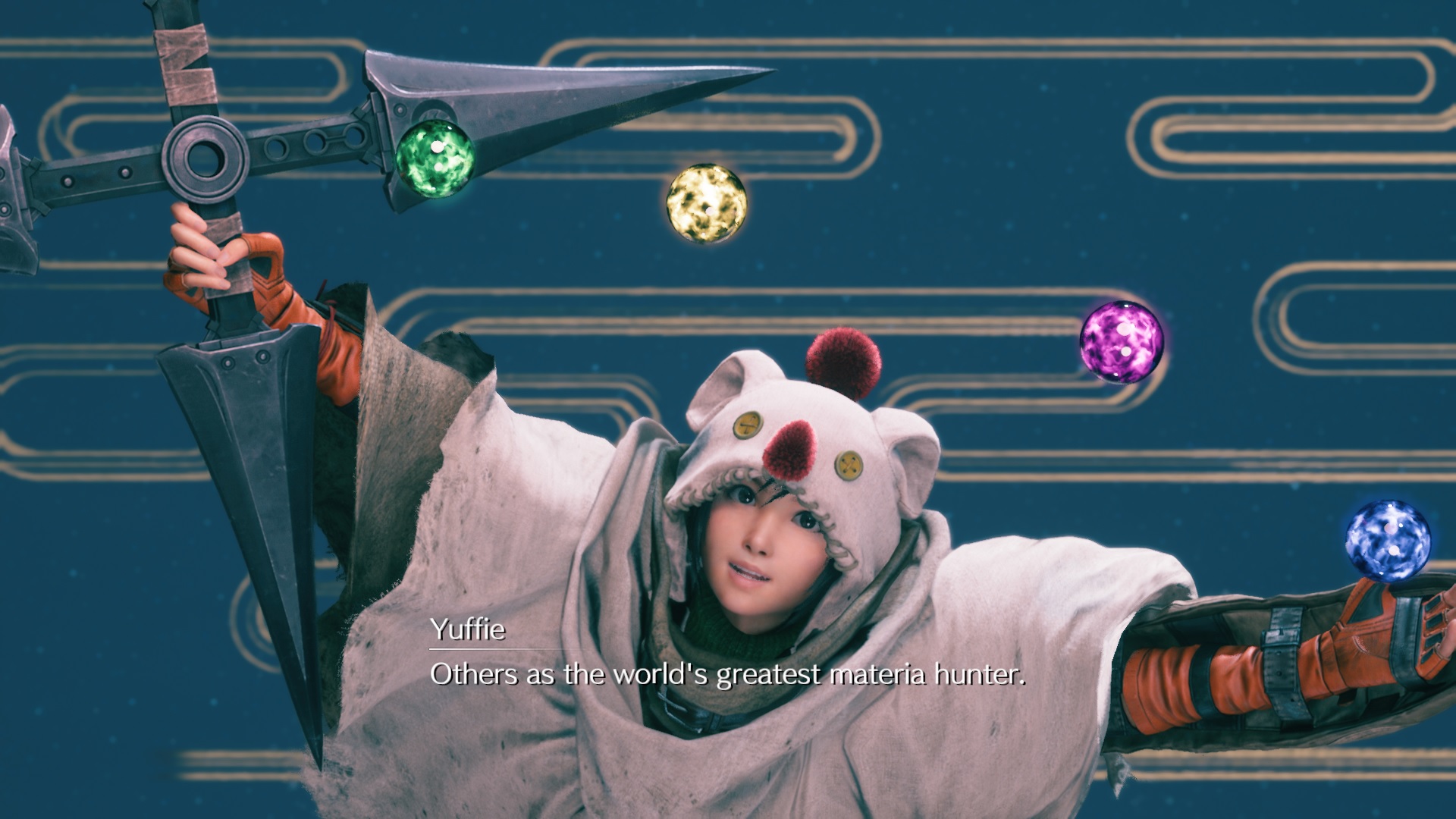 Cutscenes do make for large part of the game so it's good news they're well-produced.


Combat definitely deserves its own paragraph since we're talking about ATB aka “wait for a bar to fill out before you can act” and action combat system working in hybrid fashion. I haven't bothered with the Classic mode which operates entirely on command input because I didn't really have any issues with the action part. Each character has their gimmick and types of attack. Special is where the flavor's at since, for example, Cloud switches between two attack modes, Barret reloads his gun arm for extra damage and ATB boost, etc. Aforementioned bar fills slowly on its own, but attacking accelerates it. There are two segments to the bar and as soon as you fill out one you can activate the Command mode mimicking traditional JRPG combat menu. Game flow is you attack while rotating whoever you control, wait for their bars to get full and choose your command from the list. I'm honestly amazed they made the two opposite systems work without either feeling like unnecessary burden. Result is this comfortable interplay where you're constantly looking out to pressure and stagger enemies before maxing our your damage. I think leaning more on the action side makes it work.

If there's one misstep when it comes to combat it would be the difficulty. Normal is too easy, not helped by the fact game showers you with items you get from newly added breakable boxes in dungeon areas, and Hard difficulty as sadly treated as New Game+ where you need to have beaten the game already, plus some nonsense like disabling item usage and such.

Before I tackle the production level and all that jazz, there's one more thing - EPISODE INTERmission featuring one and only Yuffie Kisaragi up to her own shenanigans. I liked this DLC more than most of the base game. Sure, Yuffie's personality is hit or miss, but it's new. At no point was there any “what's different here?” at the back of my head. Yuffie herself is a self-proclaimed greatest Materia hunter in the world and she's gone to Midgar to steal Shinra's ultimate materia as well as join up with Avalanche. I like how this fleshes out Avalance as a whole and actually portrays Barret's own cell as an extreme one others are becoming wary of. Works in the other direction of game's own “Shinra is evil and behind everything, those poor terrorists are entirely justified” angle. I won't spoil because DLC is too short for its own good as it is, but hey... at least we got some Fort Condor as a mini-game.

It's rare you see a game remade from an entirely new perspectives while retaining so much of the original's flair. Here were have one example of doing it right. I have my issues with level layouts employed, primarily absence of anything resembling wider areas to roam and reliance on corridor designs interspersed with “Cloud crawls REAAAAAL slow so we can hide a loading screen”, but from production and artistic standpoints this is amazingly realized. Soundtrack in particular is now orchestrated all the while retaining the punch of the original. There's a weird pet peeve of mine in that inclusion of voice acting, solid job on that front too with Japanese and English, tends to cut into already quiet tracks as they get faded in and out. Stellar job all-around, goofy 2D backdrop notwithstanding at one point. It's... right in your face and I expected it to be improved for the PS5 version, at least.

I underwent a sort of mellowing out while summarizing my thoughts regarding Final Fantasy 7 Remake and it was probably for the better. Initial reaction to finishing this beloved JRPG classic was one of terrific care and effort put to include more of the expanded universe, but also flawed with approach to story and structure. In the end having a tight combat system which managed to marry action and ATB approaches was what sold me on the game more than all the flashy graphics or orchestrated soundtrack. Even if unnecessary padding turning what was originally a relatively brief part of the game into a far grander affair via side chores, tacked on weapon upgrades and other drivel it could've done without. It just makes you wonder “what are you doing next?”. 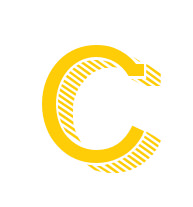 I wanted to play original FFVII anyway to get that OG experience and you only convinced me more that I should do that, in this case for story bits.

For sure. Even accounting for tons of cutscenes FF7R still essentially blew up a 6-7 hour segment into a 40 hour one for me. It DOES take someone familiar with the original and expanded material like other games/media to get the most out of it.

I never played any FF game. With the new remakes hitting the Steam store last year, maybe it’s finally time to have a peak into this epic franchise?

Regarding the FF VII remake I fear I can not give a second opinion, because I did not play it. I have heard from some streamers that they liked the effort put into the game, but they had a few issues with the difficulty (too easy). What I take from your review is, you have the same opinion.

Rather, FF7R is in limbo so far as for WHOM it was made as it almost expects from you to already be familiar with the PS1 original.

That sounds weird. Shouldn’t a remake give new players the chance to get to know the game as well? I think a Remaster should be close to the original, at least in regards of story.

It’s difficult to explain unless you’re familiar with the original, but it almost goes meta while the same time being a “what if?” scenario and drawing from expanded material like FF7 spin-off and tie-in games. Story from the original IS there. Problem is how it’s told to the player. For example, I’d wager developers factored in that everyone must have at least some level of broad gaming idea of who Sephiroth is so rather than to slowly build the mystery and suspense around him they hammer you over the head with the protagonist hallucinating seeing Sephiroth everywhere as dramatic music begins to play. Game never really earns that on its own, if that makes any sense.