Estimated reading time: ~4' (or more, if you spend times on graphs)

I had planned to do a post with graphs and such about these 6 months I’ve been part of this great group right for the first day of 2017 but on 31st I was home alone and played a bit instead of celebrating the arrival of the new year =P
And so, I finished Shelter 2, which is both an

sg win and a valid entry for december’s theme

, right on the nick time, as any good action hero.
Proof:

does it count? :)
To tell you the truth, I had already unlocked ‘em before but they only popped up when I closed the game.
Well, I was expecting something different.. it gets kind of repetitive fast ‘cause you have to keep getting food for your cubs or they won’t live enough :’(
I read that it’s kind of different from the first, perhaps that one is more “enjoyable” game-wise.
What attracted me was mainly the original graphic style which really catches the eye. I’ve had some problem in certain circumstances where one of cubs was well camouflaged by its surroundings and thus hard to spot. This was partly fault of the game’s style and partly of the camera movement system, which I didn’t quite like it.
Also, the tag survival interested me. Turned out it was more of a long rescue/escort mission, where the survival element is focused on the cubs. Again, read that this worked better in Shelter but I can’t really say anything about it. My impression was that there wasn’t much to do, and even it there was, I was feeling constantly pressed to hunt by the fear of seeing my offsprings die.
There are a few things which were spot-on, and make the experience worth:
the whole “mom” (parent) experience: perhaps the survival part was a lil’ disappointment but, isn’t this what parents actually do for their children? They put their children above all, and try to give them the best they could. I totally could imagine the game’s characters being humans instead of lynxes. And that was very touching :’(
Also, I was kind of disoriented by the open-world formula, I didn’t know what to do, where to go. This again was kind of a let-down (it wouldn’t have been one per sé but joined with the constant need of food was what put anxiety on me). But the game starts with mom-lynx being chased by wolves and if we assume that to get away she ends up in a new place, it fits perfectly! All the fears of the unknown, not knowing where to find food/enemies make sense; even the fact that from second playthrough you know where to go: because you play as one of the cubs that were born and raised there and of course they know the place.

Back to the stats!

As you can see here, there hasn’t been a single month in which I played more games than added.
(Notice: I’m saying “played” but only beaten and completed games are taken into account, unfinished are considered still part of the backlog)

But if you look at the two pie-charts below, you’ll notice that half of the games added were “free” ones, while half of the removed games are sg win :) 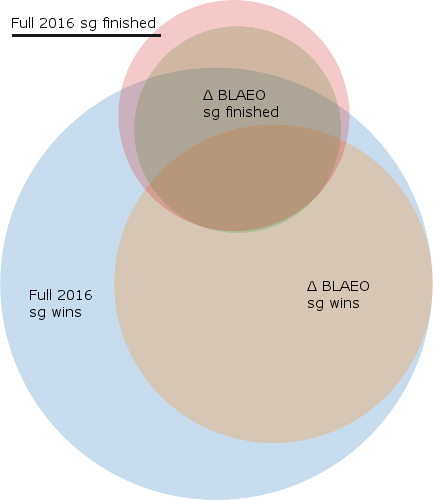 Of those 16 wins finished, 13 were wins from 2016 (with 7 won while I was already here), don’t know if this is a bad or a good thing though :\
UPDATE: 22 out of the 34 finished games were because of monthly themes. Looks like it works :D

You’ll find more detailed data in this other post. I have to warn you though that it’s not complete yet and that there are a lot of images to load (so you may want to avoid it if you have a limited connection).

Holy crap that was informative as hell. I didn’t really read every entry and saw every game added but it’s so well organized and nice to look at! That sure took a while to organize, no?

Thanks :)
Yup, perhaps even a bit more than it should have =P

Whoa, thanks for the breakdown, awesome and super interesting! It inspired me to start keeping track as well - for now I just made individual lists for added and finished games this year, will think about doing monthly breakdowns as well … but I’m probably too lazy for that :P

Thanks ^_^
It’s always nice to see people appreaciating what you do :)

I do only ‘cause I’m kind of obsessed with stats and graphs :P (and sometimes to let you all have a quick way to find info about a game instead of scrolling my profile for hours)
problem is mostly at the beginning, when you have to set everthing up; after that it’s only a game “once in a while” and you can even wait to have a few to update, if you feel more comfortable this way :)
but I know it can be tiresome XD

I take my job seriously =P

Mmmmmmmm…… Stats…. :p~~ I’ve loved your monthly breakdowns, but this is just too sexy.

Out of curiosity and not because I want to do stats as well, no! how do you keep track of the games added per month? While you add stuff (wow, that would be organized af <3) or do you check through the license activations on Steam or…?

I try to update it as soon as I get/beat a new game (mostly because I may forget some otherwise), but sometimes I let a pile up a couple and add ‘em in a single update.
Oh, and I have different files to update too, so doing it like once a day (if needed, of course) prevents me to have too much to add, because I know I would be “I will do it later” and then I’d stop completely =P