I did considerable gaming this month–only not on Steam. Most of my gaming time went into playing AC: Odyssey thanks to GeForce Now. However, I’m not going to put those stats out here, since I don’t want to jinx it (mentally).

Towards the end of the month I ended up getting into Terraria with my cousins, since I'm currently staying with them and my aunt/uncle. I bought this game way back, and tried playing it for a bit in 2018, but it's hard if you have no idea about it and I'm not a fan of reading wikis and watching videos just to learn the mechanics of a game. But my cousins are good at it (one has 600+ hours on it) so they're helping me out a lot. I've ended up getting 24 achievements for it! Maybe by the end of my stay here, I'll be done with the game as well--who knows?

This month I haven’t had much spare time for games, and whenever I had some, it went into playing Coloring Pixels. That’s because I’m currently away from home, and the laptop I have with me is not made for gaming at all. (My usual laptop is also not made for gaming, but this one is even worse.) I ended up trying GeForce Now–that’s how I moved Bioshock Infinite from ‘wont play’ to ‘unfinished’.

I spent most of the month playing Staxel, and then Coloring Pixels. That game is horrible! jk. But it's pretty easy to get addicted, as it gives an achievement every time you complete a picture. "Never played" has grown in January, but I don't mind it as much. I probably won't have much time to play games in the upcoming months anyways.

This month I was getting ready for my semester abroad in Belgium, so half of the month was spent shopping for necessities and thicker clothes. I didn't play much and whatever I played wasn't beaten or completed. I'm fine with this, because instead I've read a bunch of books. I wouldn't be able to bring books with me (except e-books) so I tried to read as much as I can. And gaming was left alone for a while.

This is not a game, so this is semi-cheating. But completed is completed!

Staxel was gifted to me by Jaded, who shares half my gaming taste, and it was a lot of fun! I built a bunch of houses in town, destroyed the fairy castle, re-built my own house, made soups, jams, and other food, harvested crops and animals. It's kind of like a Minecraft but farming-heavy.

One thing though, the multi-player wasn't for me. I tried it with my boyfriend, but the game's early parts don't work well with it imo. I'm not sure what happens later in the game because we never went that far.

I'm marking Kind Words as completed. It's not exactly a game, so my criteria for marking it completed is this:
I've done everything in the app that there's to be done.
I've collected all of the stickers.
Since there are no achievements, or actual game play, this seems enough for me. I'll definitely go back to it from time to time and write some letters, but for BLAEO, I can dismiss it. :)

This year was my first year here, at BLAEO, and I’ve had a lot of fun while keeping track of my gaming progress! I’m not sure why, but preparing monthly posts is enjoyable, so I’m going to keep doing that in 2020 too. And with BLAEO, I think I managed to make more progress than I would’ve made without it, so there’s that. :) I also made good friends here!

I don’t have the numbers from the beginning of the year, so I could only add the post-BLAEO months. But here’s a graphic showing my added/beaten numbers. 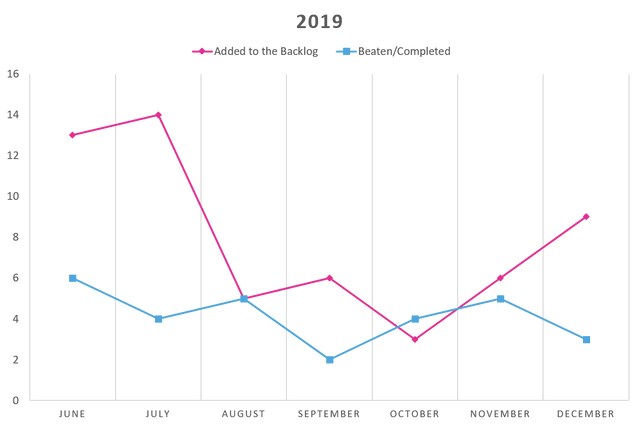 Apparently, October and November were going good… and then December happened lol.

If anyone’s interested, here are the monthly posts of 2019:

Another month of acquiring more games than I can play them. I took advantage of the sales a bit, and then I won a bunch of games on Reddit. One of the games is profile limited, so that's why the +1 on the table. 9 games in a month is a lot of games, imo. But we'll see. I'm excited to play all of them, so it's looking good!

Around the middle of the month, I kind of got in a gaming slump where none of my games seemed interesting--that's why I managed to beat only 3 games this month. I could've done much more, but most of the month was spent playing Staxel. Thanks to Jaded! I'm obsessed... as you can see from the playtime. :P

Probably I could've beaten more games if I didn't play Staxel obsessively, but here we are. I had 0 hours in the game before december. I'm looking forward to playing it more in January! Such a fun game, even though it has its bugs/problems.
I'm a bit stuck in She Remembered Caterpillars. Hoping to go back to it with a fresh set of eyes later. For now, it's halfway done. :P
I'm also looking forward to playing and hopefully beating Degrees of Separation in Jan. :)

I dropped a bunch of games this month. I just went through my unfinished/never played games and marked several "won't play", since I don't want to bother with games I won't enjoy. I might try them in the future, but not any time soon.

Only reason I'm dropping this one is that my current laptop won't play it properly. I want to play it, but it doesn't seem like I can any time soon. So for now and probably for another couple of years, it goes to the "wont play" pile. But I plan on eventually coming back to it.

Weirdly enough, the games I've acquired in December look like I was going for a color theme. I wasn't. But, here we are: mostly blue-purple games with a dash of red-pink, lol. And it's been a while since I had so many acquisitions!

Hi, I need a bit of help.
I’m kind of stuck on what to play next, for various reasons. I’ve lost interest in some games and can’t seem to gain it back, I’m stuck in some games and I don’t want to solve all of the game by using walkthroughs, or some of the games are local multiplayer and I can’t play them yet. So, hopefully from my “unfinished” games (but not started ones are also fine), can someone suggest me something to continue playing that might pull me back into gaming? Right now, I kind of don’t want to play any of my games. Which isn’t good because I don’t want to buy any new ones.

UPDATE:
Thanks to everyone again, for taking time out of their day to comment on this post. :)

My current plan is this:
I’ll play a bit of Slime Rancher and go back to a game I’ve enjoyed a lot.
Then I’ll try to continue and finish Limbo, and maybe go onto playing Inside.
I also want to give Wandersong another chance.

UPDATE 2:
And guess who didn’t stick to the plan? Points to herself. Yeah, I’m basically playing Staxel whenever I can steal some game time. Yay for finding something to play! Nay for not sticking to the plan. LOL.

Not the best game out there, but still was a nice experience. Another game like this one could be RiME--if you enjoyed that one, you might enjoy AER. It's definitely not a hard puzzle game. More like a "flying simulator" and "exploration" game. It's pretty relaxing, so I enjoyed it. But it's also probably because I got it for free from LootBoy. If I had paid for it, even with a discount, I might've felt like this was boring and mediocre.

I enjoyed this game.

Good narration, interesting story (a bit vague, but I didn't mind it), and nice game mechanics. I really liked the whole color-changing aspect of the game, and the graphics were also quite nice. Puzzles are not too hard, so it's probably not for the hard-core puzzle players, but they are still nice and require some thought. I'm glad I bought it during the Summer Sale.