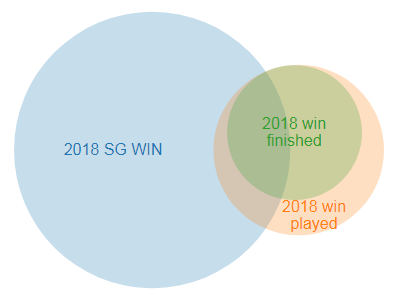 Ended the year in positive, with 21 games won and 28 sent.
I think I had started 2018 with a +3 and went super lucky in march (as you can see from the graph) which briefly pushed me to +7, setting my new record! throughout the following months I descended to -2/-3 but then september came and evened out everything.. so I've finished the year at 0.

Played much less than the 2017 (had finished 60 games vs only 20 in 2018) but that is understandable given that I’ve finally graduated1 and started looking for a job, my laptop suddenly broke and didn’t have time to fix it for a couple of months, and also because I’ve started a working trial that keeps me 12h out of home.
Even so, percentages of game categories remained basically the same.

Glad (am I? really?) to see that last year tentative to call our mascotte ( 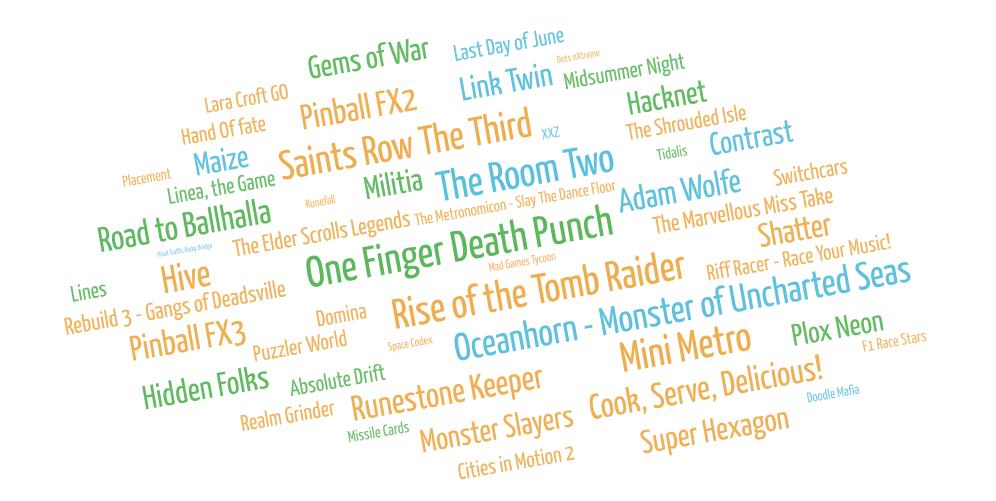 Just wanted to say that this post is eye candy. Nicely done :)

So many stats and infographics!!

I love the cloud at the end, is it by time played? (Also I wish i kept such a detailled account on how i acquired games. I made a too imprecise group for my liking (putting together massive gibs, giveaways from the devs, gifts from friends and other things), and things like chrono coins go in the general got for myself

Nope, it’s by personal taste.. I thought it was clear, sorry ^^; the bigger the better

Well, you can start 2019 with new and improved categories ;)
and leave the old games a bit not-properly-caategorized, just like mine =P ..until “someday” you’re ready to update them XD

don’t think of them as definitive, you can adjust them along the way! example: I used to have a ninja'd category but I’ve realized that they are too few to have their own category so now they’re into other wins; on the other hand I’ve recently added traded because I don’t know beforehand how I’ve acquired the game I may trade away.
Coins contains all those games acquired with some other currency (it was only TremorCoins for a long while, now there are also Chrono and some else.. still undecided if I should also move steam wallet in here)
all this to tell you to don’t be afraid to change.. one step at time :)
all these data are taken from a spreadhseet I’m keeping just for BLAEO’s sake. the main file with all the info is way too outdated by now ^^; I’d like to create a proper database but I’m not good at it so I’ve been postponing for quite some time now ^^;

You suggestion makes sense, maybe i’ll implement those new categories as tags so I can then retro apply them to the other games without changing the lists themselves :3 (if my memory can be used for that though, which in some cases I’m afraid it’s a little late)
I also have a special spreadsheet for BLAEO (did i say i love stats?) but i was lazy to keep as many stats as I’d like so i’ve been mainly tracking the backlog progress/recess by month to make the end of the year graphic.

I’m trying to tag all games here but it’s a long job, so it’s far from completed :\

If you mainly do yearly reports it’s not a big problem, you add info and from this point onward you have them.. sure, if and when you want to do an overview it’ll be a bit harder.. :\

I’m still looking for a way to create graphs via CSS, so I can do animations/transitions between months :3
Already found something that may work, the problem is to make it work here.

Usually when i do my stats for the months i add them to my spreadsheet so at the end of the year is more or less ready for the big one. As for the tagging i’ll go slow and steady while doing other stuff for the already added games, and will tag the new ones right away, it should be easier.

I loooove these graphs, they’re awesome! The word cloud in particular is really well done! Those titles looming large based on how much you enjoyed them is great to see.